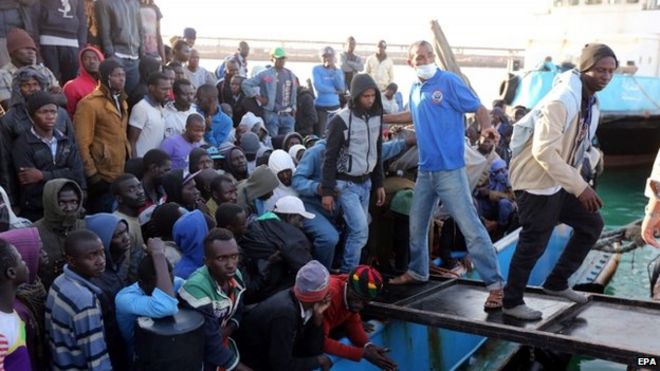 Notice how all of these "refugees" are actually young males, not vulnerable women and children

Another reason to break apart the European Union.

The European Commission will make the controversial proposal that EU member countries should take in refugees under a quota scheme.

The UN estimates that 60,000 people have already tried to cross the Mediterranean this year.

Migrants are being driven to make the journey by "horrific abuse" in Libya, according to Amnesty International.

More than 1,800 migrants have died this year in the Mediterranean, a 20-fold increase on the same period in 2014.

The European Commission's migration policy, to be announced on Wednesday, will also propose organising legal means for migrants to come to Europe so they do not turn to traffickers.

However, it will need to be agreed by EU states...

One has to assume that to Western leaders, the endless flood of "refugees" resulting from the idiotic Libyan intervention is a side benefit of mass immigration.

Austrian Chancellor Werner Faymann has described a quota as "a question of fairness", adding that asylum is "not an act of mercy but a human right".

So why bother with border controls or countries at all?  Let's just be Africa and be done with it if every human being on earth has a "right" to enter Europe.  As long as we don't have to pay taxes anymore.

However, other EU countries are fiercely opposed to the idea of quotas.

A UK government spokesman said: "The UK has a proud history of offering asylum to those who need it most, but we do not believe that a mandatory system of resettlement is the answer."

"We will oppose any EU Commission proposals to introduce a non-voluntary quota."

Leaders in Hungary, Slovakia and Estonia have also objected to a quota system, with Hungarian Prime Minister Viktor Orban calling it "a crazy idea".

The purpose of mass immigration in the eyes of the European Union is to ensure that some day, someone like Viktor Orban will never be allowed to be elected.