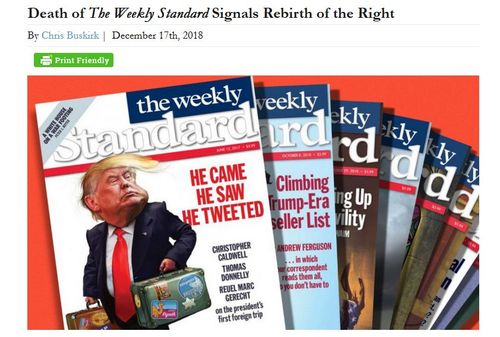 End Of The Weekly Standard, Rebirth Of The Right?

Journalists are mourning the death of The Weekly Standard, the standard-bearer of neoconservatism. Just before the midterms, The Weekly Standard went out of its way to attack Congressman Steve King, thus joining with the rest of the media in attempting to police the Right. Not surprisingly, Republican elected officials are celebrating the death of the “conservative” magazine journalists love.

.@RealDonaldTrump is right on The Weekly Standard’s deserved demise (“pathetic and dishonest”). If the articles targeting me were redacted until only truth remained, there would not be much left to read. https://t.co/lnqnU5orBx

Sample attacks on King:King of the Low Road and Did Steve King Just Refer to Immigrants as 'Dirt'?

Good riddance to the fake conservatives and warmongers.https://t.co/lkGNWliDGr

Sample attack on Trump: All Weekly Standard stories on Trump.

More than anything else, The Weekly Standard will be known for its championing of the Iraq War. Therefore, it's end may mark the final departure of the American Right from neoconservatism.

Chris Buskirk at American Greatness argues the magazine was a creature of the self-serving establishment known as Conservatism Inc.

[T]he life and death of The Weekly Standard is really the story of the death and rebirth of American conservatism, which is nothing more than the modern political expression of America’s founding principles.

As with other more virulent forms of Left-liberal politics, the neoconservatives maintain a sense of aristocratic entitlement to rule despite having killed almost everything they touched. It is their combination of titanic hubris and priggish moralism that is behind their aggressive advocacy of endless foreign wars and meddling in the internal affairs of other countries. For The Weekly Standard, it made sense to send thousands of Americans to their deaths defending Iraq’s borders, but they wouldn’t lift a finger to protect our own. As the real world results of their misadventures came home to roost, conservatives realized that The Weekly Standard didn’t represent them.

For years, neoconservatives undermined and discredited the work of conservatives from Lincoln to Reagan who held to a set of common principles and a common sense understanding that America is for Americans and it is the job of government to protect the rights and interests of the American people—and only the American people. But over the past few years, Bill Kristol became more transparent about his real beliefs. For example, he let us know in a tweet that he “Obviously strongly prefer(s) normal democratic and constitutional politics. But if it comes to it, prefer the deep state to the Trump state” and in another that, “The GOP tax bill’s bringing out my inner socialist.” The point is that Kristol and the Standard’s attachment to conservative principles was always provisional and transactional. The Republican Party and the conservative movement were a temporary vehicle for their personal and policy agendas. Now, Kristol and others have moved on in search of a new host organism.

[Death of The Weekly Standard Signals Rebirth Of The Right, December 17, 2018]

Buskirk also mentions how opposition to mass immigration and growing nationalism left The Weekly Standard out of step with the American Right.

When Americans complained about his wars, about the destruction of the middle class, about mass immigration that upset the balance in their communities, Kristol said, “Look, to be totally honest, if things are so bad as you say with the white working class, don’t you want to get new Americans in?” No Bill, we have a responsibility to try to help our fellow Americans, not replace them.

Still, just because The Weekly Standard is gone doesn't mean that the American Right is saved. One of the more disturbing elements of the post-Trump American Right is that the old guard of the Beltway Right has essentially stayed in power. Though they pay lip service to President Trump and principles such as opposition to mass immigration, there has been no fundamental rethink of policy, even after Trump won the nomination and election by ignoring conservative conventional wisdom. Instead, we're still talking about tax cuts, minority outreach, and all the other bromides Conservatism Inc. has been pushing for decades.

It's a bit much to say the American Right has been "reborn." Instead, it's more accurate to say that it is up for grabs. It was hoped President Trump would lead the way in moving the GOP towards nationalism and a "workers' party." Instead, he's been an imperfect vehicle for his own movement. The American Right isn't on the rise quite yet; its future is up for grabs. We at VDARE.com need your help, right now, if we are to build an institution that can do what President Trump couldn't.

Still, the replacement of The Weekly Standard was a necessary step if the American Right, and America, are to be saved.