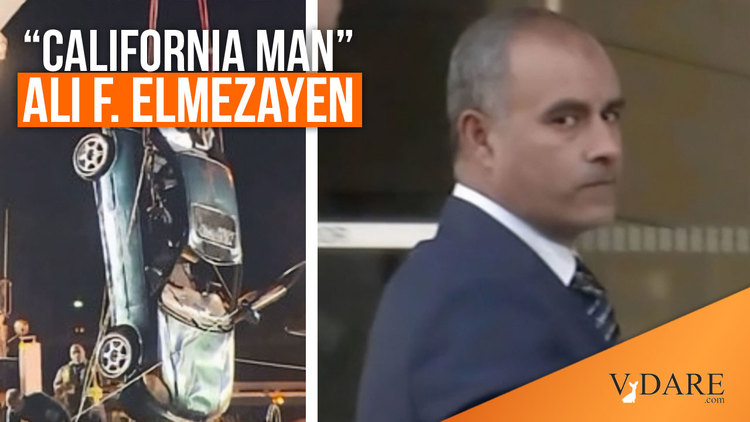 Egyptian Immigrant Who Killed His Two Sons Is "California Man", "Dad", To MSM

I found one of the few MSM  sources that answered that question, from Elmezayen's arrest in 2018: Egyptian national indicted for fraud CalCoastTimes, November 21, 2018.

The headline (Egyptian National Sentenced to 212 Years in Federal Prison for Killing His 2 Autistic Children, March 11, 2021) is technically wrong. What Elmezayen was sentenced for in federal court was fraud (mail fraud, wire fraud, aggravated identity theft, and money laundering).

He was sentenced for defrauding insurance companies by killing his two autistic children. He drove his car with his domestic partner Rabab Diab, who couldn't swim, and his two youngest, sons, 8 and 13, into the Port of Los Angeles, and swam to safety. Diab survived "when a nearby fisherman threw her a flotation device".

The reason he wasn't charged with murder was they couldn't prove it wasn't an accident, but they could prove that he'd taken out a lot of insurance on his family under false names.

On April 9, 2015, 12 days after the two-year contestability period on the last of his insurance policies expired, Elmezayen drove a car with his ex-wife and two youngest children off a wharf at the Port of Los Angeles. The site of the crash was a loading dock and worksite for commercial fishermen.

Elmezayen swam out the open driver’s side window of the car. Elmezayen’s ex-wife, who did not know how to swim, escaped the vehicle and survived when a nearby fisherman threw her a flotation device. Two of the couple’s three sons, who were 8 and 13 and who were both severely autistic, were strapped into the car and drowned. The couple’s third son was away at camp at the time and was not in the car at the time his father drove it into the water.

We have noted a pattern we call "immigrant familicide" where someone snaps and kills their whole family, and sometimes themselves. This is something different: a murder for gain.

The thing is, Elmezayen is really "Egypt Man"—the government says he "used part of the insurance proceeds to purchase real estate in Egypt". But think of all the naive news consumers who don't know any of that.