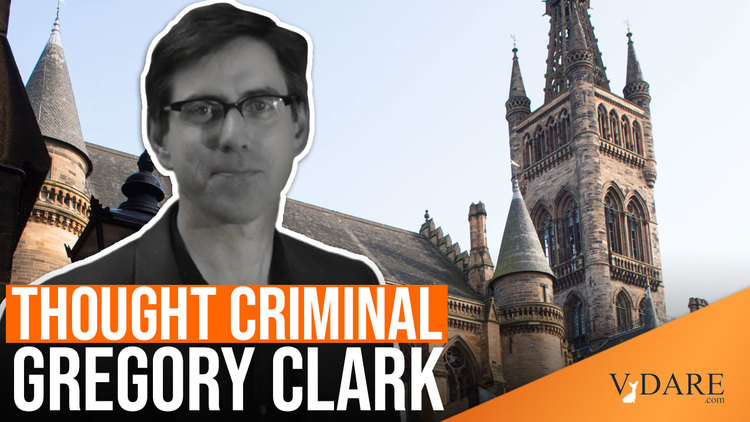 Back in 2014, I predicted that the third book in the trilogy by economic historian Gregory Clark, to follow his A Farewell To Alms and The Son Also Rises, would be entitled For Whom the Bell Curve Tolls.

And I was right.

And Clark is getting canceled over it.

From the Glasgow U. Guardian:

A highly controversial seminar to be led by Gregory Clark, a visiting professor at London School of Economics, to be delivered for the Adam Smith Business School has been postponed amid pressure from student groups.

I don’t see it for sale anywhere, so it’s either still upcoming or has been completely canceled.

he argues that socio-economic status is genetically inherited through the “genetic transmission of … some mysterious mix of drive and ability”. He also theorised that “200 years from now the descendants of enslaved African-Americans will still be underrepresented”. Some have asserted his statistical analysis on which these conclusions are based is highly questionable, with a lack of reference to inherited wealth and social status asserting correlation between surnames and wealth as causation.

Uh … Clark’s A Farewell to Alms was based on his in-depth analysis of English wills from 1200–1800 and his second book was about the social status of different surnames, so I kinda doubt he fails to reference inherited wealth and social status.

This week saw an announcement from Gavin Williamson, the education secretary, stating universities face fines for suppressing free speech on campuses. Speculation has led some to believe that being the reason why the event was not cancelled, and instead postponed, despite these new fines not applying to Scottish universities. The Adam Smith Business School announced they will reformulate the event “as a workshop to focus on different perspectives and analyses of what is a novel historical dataset”.

Hopefully, Clark is now working on a book about the terrible toll that senility takes on IQ: The Old Man and the g.