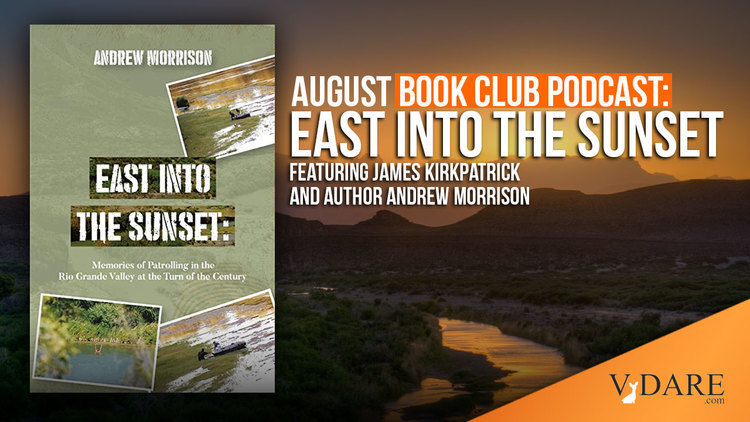 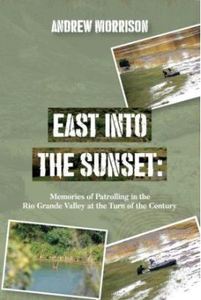 Arnold Toynbee famously said that “civilizations die by suicide, not by murder.” We can think of a few counterexamples, like the fall of the Eastern Roman Empire, but they tend to be the exceptions that prove the rule [Remembering Constantinople, by Gregory Hood, American Renaissance, May 28, 2021]. Still, I think Toynbee was wrong. Civilizations don’t die from suicide; they are murdered from within.

Andrew Morrison’s East Into The Sunset: Memories of Patrolling in the Rio Grande Valley at the Turn of the Century, is a compelling and occasionally infuriating reminder of this truth. It recounts Morrison’s own experiences on America’s front lines after September 11, 2001. Unfortunately, it also shows that Peter Brimelow was right, and that 9/11 meant absolutely nothing to those who rule us. As Morrison recounts, even after the worst terrorist attack in American history, Border Patrol agents were prevented from doing their jobs. If anything, the Border Patrol was weakened, as a “white flight” from the entire service led to former Agents serving as better-paid Air Marshals instead. The heavily Hispanic Border Patrol repeatedly had to deal with corruption, and patriotic Agents of all races not only had to deal with temptation, but politically correct policies dictated by their superiors.

As Morrison recounts, Central Americans and just about everyone else in the world have a detailed knowledge about the way American immigration law works. “People from other countries like Brazil and Honduras know that if they come up here with their underage kids, they cannot be put into camp (again, immigration detention was always referred to as camp for some reason),” he wrote. “That’s deemed cruel and unusual behavior to put the kids in camp. So they are given what’s called an OR (stands for Own Recognizance) which means they are given a court date for a deportation hearing and then they are released into the United States.”

Of course, as we know, most simply skip the court date.  Thus, Border Patrol Agents are reduced to being “greeters.” If Border Patrol Agents actually want to safeguard American border security, they must actually run away from illegals who know how to work the system. Not surprisingly, this doesn’t help morale.

This issue is more important than ever because of the Biden Administration’s treasonous decision to jettison the “Stay In Mexico” policy that kept invaders out before a judge heard their case. A Supreme Court decision may limit the damage, but American resolve will be put to the test. Caravans are marching on the American border even now [More migrant caravans bound for U.S.-Mexico border, Baja California official says, by Salvador Rivera, BorderReport, September 1, 2021].

The only thing in the way will be a Border Patrol which must know that the current administration will not have Agents’ backs. It will also be forced to confront a Main Stream Media eager to ruin their careers and lives.

The uncertainty and anarcho-tyranny that characterizes our border policy has tragic consequences. As Morrison writes, the only law enforcement system that makes sense is one where criminals know punishment will be prompt and certain. Instead, America has built a system that is almost arbitrary. Even if you can get an illegal in front of a judge, “different immigration judges make up different rules for aliens and refugees.”

Perhaps the best aspect of this book is that, like Toynbee, Morrison knows how to take the long view. He recounts funny, tragic, and frankly shocking episodes on the border and throughout the immigration bureaucracy, but he doesn’t lose sight of the larger pattern at work. America is simply acting out the final episode of the tragic drama that grips all failing nations.

As he puts it:

“When the Roman Empire dissolved, they had troops from England to the Eastern Mediterranean. They never called them back to fight. They simply left them where they were. The Roman troops stopped being paid and they melted into the landscape. As we put more troops in distant lands but none on our southern border, we are mimicking the behavior of the Romans. Unfortunately, burying our collective head in the sand is not going to save us.”

In the wake of the Afghanistan defeat, there may be an opportunity for the Historic American Nation to break away from what some call the Globalist American Empire [With Zero Moral Authority Left, The Globalist American Empire is Doomed to Fail at Home and Abroad, Revolver, February 2, 2021]. Instead of fighting for foreigners or relying on foreigners to fight for us, we could once again protect our own borders for the defense of our own people.

National revival and even greatness may lie ahead of us. It won’t happen under the Biden Administration. We don’t know what, if anything, will emerge from this American Winter.