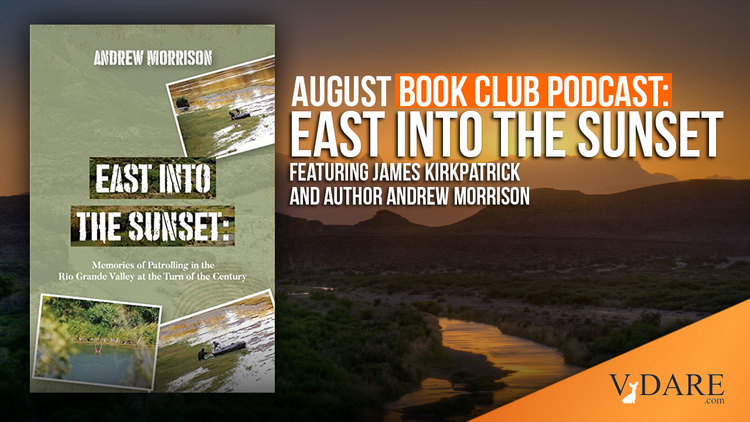 Congratulations to our winner of August's VDARE.com Book Club Raffle: our supporter of over six years in the Pacific Northwest! Thank you!

Discussion questions for Andrew Morrison's East Into The Sunset: Memories of Patrolling in the Rio Grande Valley at the Turn of the Century are now posted on our book club page here for all members.

Up next, author Andrew Morrison is joining our Book Club Podcast to answer all your questions! Send your questions to rose@vdare.com by Tuesday, August 24th to be included.

An excerpt from Morrison's memoir:

The only people we really kick out are poor Mexicans. People from other countries like Brazil and Honduras know that if they come up here with their under age kids, they cannot be put into camp (again, immigration detention was always referred to as camp for some reason). That’s deemed cruel and unusual behavior to put the kids in camp. So, they are given what’s called an OR (stands for Own Recognizance) which means they are given a court date for a deportation hearing and then they are released into the United States. A Border Patrol Agent has to write each one of them up, which takes about an hour and a half apiece if you are lucky and then they get released. That makes our jobs the official “Welcome to the United States greeters.” People who enter the country this way don’t have to have a medical check or anything else that a person who tries to come here legally does. It’s so bad that it’s to the point where aliens chase after our Agents to get picked up as our Agents run the other way. You think I’m joking, but I’m not. [p. 195]