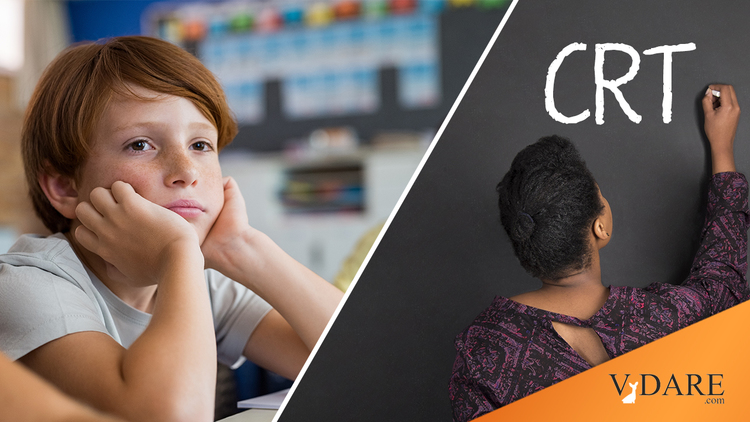 What will be the long-term effect of Critical Race Theory growing ever more dominant in schools?

Perhaps the biggest social science finding of the second half of the 20th century was the 1966 Coleman Report’s discovery that differences among schools were surprisingly unimportant in student performance compared to what nature and/or nurture kids brought from home. So, the default guess is that even CRT won’t hurt students’ adult IQs all that much.

Obviously, the growth in Critical Race Theory in the schools, while a goldmine for Critical Race Theorists, has done nothing to boost the objective achievement of black students. In general, CRT encourages blacks to complain, slack off, fantasize about oppression and, in general, not hit the books.

But will CRT’s constant racist denigration of white children lower their abilities?

The point of Critical Race Theory education is to create a hostile environment in the classroom to punish white children for the sins and (more humiliatingly) the accomplishments of their ancestors. It probably won’t lower white adult IQ much, but it will make children unhappier. Childhood is a big part of life, so people who demand to get paid to abuse children for their race are pretty vile.

After I posted this, I found this new Washington Post article on the latest federal NAEP test scores (supposedly from early 2020 before the pandemic):

First graders in a classroom at an elementary school.
By Laura Meckler
Today at 12:01 a.m. EDT

Even before the pandemic upended school, test scores in both reading and math declined for 13-year-old students, the first drop registered in a half century in testing meant to measure student proficiency over time.

The phrase “first drop” is exaggerated. What it looks like was that 2012, back before the Great Awokening, was more or less the peak for NAEP math and reading scores. Here’s the feds’ graph of math scores:

The data showed declines among the lowest-performing students, but not those at the top, suggesting that educational gaps that pervade the U.S. system are becoming larger, not smaller.

Peggy Carr, commissioner of the National Center for Education Statistics, has been working with these data for 28 years and couldn’t believe the results when she saw them. She was shocked to see an absolute decline. “I had to ask the question again of my staff. `Are you sure?’ I asked them to go back and check,” she said.

The National Assessment of Educational Progress for decades has been measuring student performance in a variety of academic subjects to chart progress — or lack thereof, and dubbing the data the “Nation’s Report Card.” The results released Thursday, based on a nationally representative sample of children, compared scores of 9- and 13-year-olds to those in the early 1970s and in 2012.

Student scores remained, across the board, higher than they were a half century ago.

But the new results showed overall declines for 13-year-olds since 2012, with drops concentrated among the lowest-performing students. Similar drops have also been registered on a separate, similar assessment designed to measure short-term trends, with those scores declining for those at the academic bottom and rising for those at the top.

It’s almost as if eight years of Critical Race Theory in the schools haven’t proven a panacea.

The new report finds scores have fallen for Black and Hispanic students since 2012 and remain flat for White children, widening the racial achievement gap.

Black math scores for 13 year olds dropped like a rock during the Great Awokening:

How could it possibly have happened that eight years of telling blacks how oppressed and entitled they were didn’t make them work harder at their math homework?

During the Great Awokening, the 13-year-old white-black math gap grew from 29 points to 35 points, or about one-fifth bigger: The results add to the evidence that American schools are not just failing many students, but that the problem is actually getting worse.

“We are disappointed to see that scores have stagnated or dropped since 2012, and we are particularly concerned to see that results among the lowest-performing students have dropped,” said Carissa Moffat Miller, CEO of the Council of Chief State School Officers.

Education Secretary Miguel Cardona has said he hopes that U.S. schools will not just return to their old ways post-pandemic but that they will create stronger systems to help all learners. These data make clear how hard that may be, given the academic slide over the past decade.

The tests were administered in the 2019-20 school year, before the pandemic closed schools. Many experts expect further declines stemming from the substandard, online education that followed. National tests will be administered this school year among 9-year-olds, ahead of the normal schedule, to see if those fears came to pass.

Testing had been scheduled for 17-year-olds in spring 2020, but it was cancelled due to school closures. The tests had already been administered for 9- and 13-year-olds, offering the opportunity to compare performance immediately before and after school closings.

Among 9-year-olds, there was no statistically significant difference from 2012 in math or reading, up or down.

The national tests are better at explaining what happened than why, though there were some clues. A survey that accompanied the test results found increases in the number of students who said they never or hardly ever read for fun on their own time. In 1984, 9 percent of 9-year-olds said reading for fun was rare. That rose to 11 percent in 2012 and to 16 percent in 2020.