(Reuters) - Prominent immigration activist Jose Antonio Vargas was detained at an airport in McAllen, Texas, on Tuesday as he was passing through a security checkpoint, the immigration rights group he co-founded said.

Airport officials in the border city could not confirm that Vargas had been detained but said an unidentified individual was taken into police custody at an airport security checkpoint.

Vargas posted a picture of himself holding documents on a Define American Facebook page as he was about to go through airport security.

"The only IDs I have to show security: my Philippine passport and my pocketbook U.S. Constitution and Declaration of Independence, which I keep with me at all times. I don't know what's going to happen," he wrote.[More]

Jose Antonio Vargas is a Filipino illegal alien who qualifies as a DREAMer, because he was brought here as a kid, and abandoned by his mother with legal relatives. He got through college with the aid of donations, since he couldn’t legally get grants or loans. His high school class couldn’t go to Japan on a trip because he wouldn’t have been allowed back in to America—they had to go to Hawaii, instead.

When he “outed” himself in the New York Times, I said my say about him in The Fulford File | Illegal Alien Poster Boy Jose Antonio Vargas—Lawbreaker, Liar, Displacer of American Workers, Treason Lobbyist, Thief.

If this year's treason has a multicultural mascot, it's illegal alien Jose Antonio Vargas. As a coveted diversity “twofer,” both non-white and gay, Vargas (a Filipino not a Mexican, as Steve Sailer  has pointed out—but hey, what can you do?) is a hero to his friends and colleagues in the Main Stream Media, many of whom actively assisted in his law-breaking.

Note: Vargas is not called a hero because he served America in war, or rendered some public service. Objectively speaking, it's doubtful that the real problem facing the United States is a critical lack of homosexual journalists who think America is “racist.”

No, Vargas is a hero to Obama’s America precisely because he despises it—and wants to remake it.

Michelle Malkin wrote about him in Jose Antonio Vargas And The Insane Folly Of the “Undocumented Immigrant”.

The insane folly is that Vargas’s whole existence, his very presence, in America is illegal, but he’s trying to drive a car (without a legal license) work in MSM jobs, which he left to serve as “poster boy” for a well-funded (George Soros) foundation called Define American.

Recently, he wrote that he was “trapped” on the border, because he’d gone to cheer on the illegal invasion, and couldn’t get out of Texas, which, because it’s in the invasion zone, has immigration checkpoints, precisely to catch people like him. [Jose Antonio Vargas: Trapped on the Border, America’s Voice, July 14, 2014 at 10:54am] 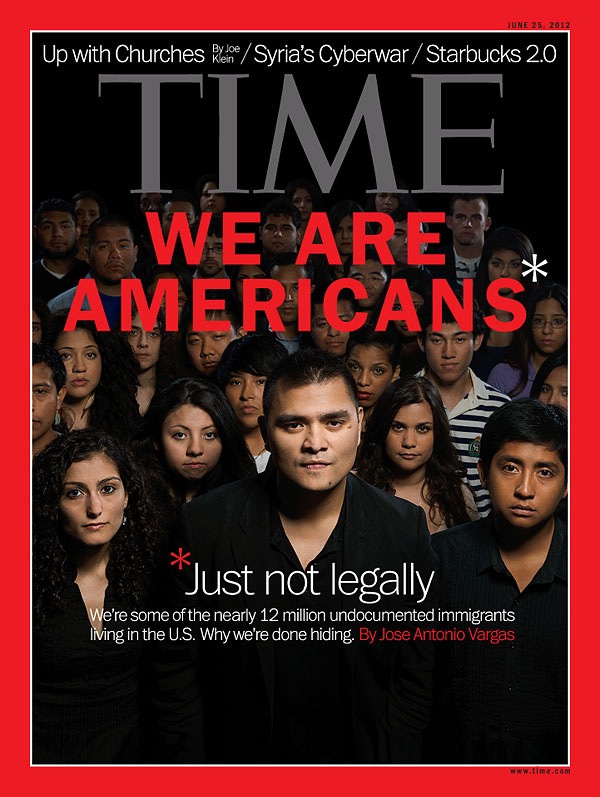 Now he’s been “detained”, which means the system is finally working on Vargas, as it should have been as soon as he went public in the NYT . Or maybe Homeland Security could have figured out he was illegal after he made the cover of Time Magazine.

What should have happened is what’s called “exemplary prosecution”. Vargas is deliberately defying the federal government, like Cliven Bundy, or protesters in Murrieta.

That’s the kind of thing that should prompt the government to make an example of him, as we discussed when he was arrested for driving illegally.

What should happen is that Vargas should be detained and denied bail. The best ICE lawyers should work on expediting his deportation to the Philippines, and they should see if they can prosecute “Define American” for harboring or conspiracy.

That’s not what’s going to happen, unfortunately. It’s more likely that the ICE employee who detained him will be disciplined, and Obama will shut down the checkpoints by executive order.