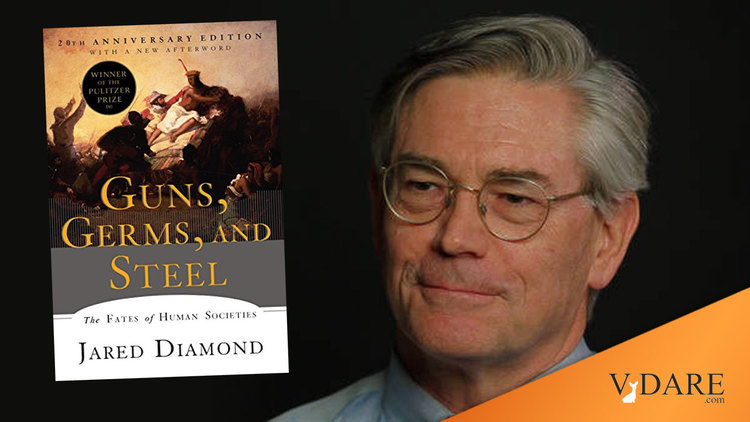 Donald G. McNeil Was Fired From NYT In Part For Being A Fan Of Jared Diamond's GUNS, GERMS, AND STEEL

Postcard From Peru: Why the Morality Plays Inside The Times Won’t Stop

In 2012, when The New York Times was panicked about its financial future, this newspaper went into the travel business. It began selling “Times Journeys,” on which an expert beat reporter would be your guide to Berlin or the Galápagos Islands.

The trips brought in some money, but were expensive to run and complicated to manage — particularly in the summer of 2019, after The Times began hosting teenagers. …

Nor were the reporters always ready for the confident, hothouse politics of elite American high school students. …

And then there was the trip to Peru that summer. The parents of adventurous young meritocrats paid $5,490 (plus airfare) for two weeks studying “Public Health and Development in the Andes.” On that trip, the reporter, Donald G. McNeil Jr., got into a series of heated arguments with students, none of them Black, on the charged question of race. Their complaints would ultimately end his career as a high-profile public health reporter for The Times, and again put The Times at the center of the national argument over journalism and racism and labor. …

What happened in Peru, too, was a kind of collision between the old Times and the next generation of its core audience, the educated globally minded elite. The student at the center of this story is Sophie Shepherd, who isn’t among the teenagers who have spoken anonymously to other news organizations. She and two other students said she was the person who spoke the most to Mr. McNeil and spent the most time with him on their “student journey.”

She was 17 at the time, and had just finished her senior year at Phillips Academy Andover, a boarding school sometimes rated America’s best. She’s the kind of teenager who is excited to talk to a New York Times correspondent about public health, and perhaps to put the adventure on a résumé. She had even done the optional reading Mr. McNeil suggested, Jared Diamond’s 1997 book, “Guns, Germs, and Steel,” a Pulitzer-winning history that argues that environmental and geographic factors produced the global domination of European civilization. The book has drawn criticism for a deterministic view that seems to absolve colonial powers of responsibility for their choices.

As us oldtimers recall, Guns, Germs, and Steel was a Pulitzer Prize-winning bestseller for seeming to refute The Bell Curve. (Here is my 1997 review of Diamond’s book in National Review.) The book is highly relevant for a trip to Peru since Pizarro’s expeditionary conquest of the large Inca Empire in the 1530s was one of the most spectacular examples of the subject of the book. As I wrote in 1997:

Jared Diamond’s goal is to explain why Eurasians conquered Africans, Australians, and Americans instead of the other way around, even though conventional social scientists shy away from such a fundamental question out of fear of what they might find. Since random accidents of personality and culture appear too trivial to account for the clash of continents’ lopsided outcomes (e.g., a few hundred Conquistadors demolished the grandest empires of the New World), this leaves only two possible underlying causes: either the winners had better homelands or better bodies and brains. Deeming genetic explanations “racist” and “loathsome,” Diamond sets out to reaffirm the equality of humanity by showing the inequality of the continents.

But by now, like in that Borges story “The Theologians,” about the Late Antiquity theologian who anathematizes another theologian until God gets them confused and smites the persecutor for his heresies, both books seem pretty much the same to the Youth of Today: crimethink! Back to the NYT:

Ms. Shepherd said she noticed that Mr. McNeil was walking alone as they left their hostel on the first morning of the trip, so she caught up with him. She asked him, she recalled, about the criticism of the book.

“He got very defensive very quickly about it,” she recalled. “It’s just a book, it’s just making this point, it’s very simple, it’s not racist.”

She said she backed down, apologized and “felt terribly guilty — like I must have come off as a crazy liberal.” …

On the walk over, she said, she talked about her favorite class at Andover, a history of American education that covered racial discrimination. He responded, she recalled, that “it’s frustrating, because Black Americans keep blaming the system, but racism is over, there’s nothing against them anymore — they can get out of the ghetto if they want to.”

Ms. Shepherd said she tried to argue, but he talked over her whenever she interjected, their voices getting louder and attracting the attention of other students, two of whom confirmed her account of the conversation.

“This is the thing with these liberal institutions like Andover — they teach you the world should be like this but that’s not how reality is,” she recalled him telling her. …

But the complaints didn’t fall on deaf ears at The Times for a reason that also hasn’t come through clearly in the coverage — because they rang true. Mr. McNeil is known as a difficult character at the paper, a detail that is both irrelevant to the big ideological questions and important to understanding what had happened. A kind of Times-made man who was married for a time to a third-generation Times woman, he started at the newspaper in 1976. He had risen through the ranks from copy boy to become a night rewrite man, a theater columnist and a correspondent in Paris.

To some, he embodied the swagger of the mid-20th century Times man, whose very presence rendered a story news. He could be a generous colleague, and blunt honesty is welcome in a newsroom, but he also sometimes alienated his bosses and colleagues. He asked sharp questions of the former publisher, Arthur Sulzberger Jr., at the company’s annual staff meeting, and was a union activist who attacked management during brutal contract negotiations in the dark years of 2010 and 2011. He was a devoted, effective organizer, others in the News Guild recalled, but also drove his brothers and sisters in labor crazy with his imperiousness, and voted against the union’s 2016 contract, arguing that the union should have held out for more.

His impolitic views were also hardly a secret. When he published a book on the Zika virus in 2016, a puzzled reviewer in The Quarterly Review of Biology noted passages about feminists and gay sex, and wrote that “it is McNeil’s seniority and journalistic experience that makes the occasional misstep, or indelicate deviation from the science, all the more surprising.”

The sorts of views that raised eyebrows in The Quarterly Review of Biology had shocked the teenagers. And when a furious Dean Baquet, the executive editor, read the complaints about the Peru trip in 2019, he said he initially wanted to fire Mr. McNeil. But the union played its traditional role, fighting aggressively to protect him. The union, a person involved in the conversations said, was ready to take The Times to arbitration if the company attempted to terminate Mr. McNeil for his conduct on the trip. Mr. McNeil received a formal reprimand instead.

Mr. McNeil, who was not far from retirement, returned to his role as a reporter on the relatively unglamorous public health beat. He talked openly about taking a buyout the next time The Times offered them, and his career could easily have ended that way.

But then, just over a year ago, a strange new virus began spreading around the world. Mr. McNeil suddenly became a regular guest on The Times’s popular podcast, The Daily. His doomsaying was electrifying — stark, certain, sometimes alarming. He emerged as the voice of The Times’s coverage of the crisis. …

That high profile may have led to the leak of The Times’s internal response to the Peru trip to The Daily Beast. Some employees then organized a letter saying that “our community is outraged and in pain” and asking why Mr. McNeil’s conduct hadn’t prevented him from covering a crucial story with complex racial disparities. The letter didn’t call for him to be fired, but for The Times to review its policies.

Other journalists considered the letter itself unfair, an attack on a veteran reporter’s career over speech that wasn’t directly connected to his journalism. Some Black journalists felt their white colleagues were rallying to Mr. McNeil’s defense rather than worrying about his words’ impact. “You often wonder what your white colleagues who are lovely to your face are actually thinking or saying about you — or people like you — behind your back,” a national reporter, John Eligon, tweeted.

Is it too hard to point out that McNeil is an old white man in a well-paid job, and so the blacks like Eligon and Nikole Hannah-Jones want to fire him and put one of their friends in his position?

… The Times will have to navigate its identity in tandem with the next generation of its audience — people like Ms. Shepherd, who said that she was most surprised by the gap between Mr. McNeil’s views and what she’d read in her favorite news outlet.

“That’s not what I would have expected from The Times,” she said. “You have the 1619 Project. You guys do all this amazing reporting on this, and you can say something like that?”

More of the wisdom of Donald McNeil, this from the Washington Post:

“Right out of the bat he was denigrating the medical traditions of Peru,” one student told The Post. Another described McNeil’s interaction with a local shaman as disrespectful and “cringeworthy.”

It’s almost as if the public health reporter for the Science section of the New York Times doesn’t believe in the healing power of shamanism.

At one point, the reporter allegedly described nepotism as “affirmative action for White people.”

Of course, these days, you aren’t supposed to mention even the existence of affirmative action.

This will be the end media financial model. Rich graduates pay $$$ to ruin the career of an ageing journalist. Like a 21st century safari https://t.co/nilzgsYaKm