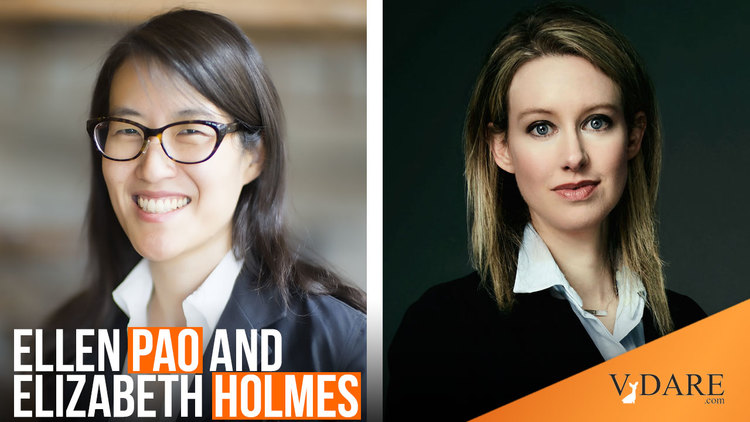 Earlier: Ellen Pao Is Back and She's Going After Peter Thiel for Endorsing Trump and BlackRock Is Looking For The Black Elizabeth Holmes

Ms. Pao is a tech investor and chief executive of Project Include, a diversity, equity and inclusion nonprofit. She is the author of “Reset: My Fight for Inclusion and Lasting Change,” about her lawsuit against a venture capital firm and her experience running the technology company Reddit.

Elizabeth Holmes followed the Silicon Valley playbook to a T. She was focused and ambitious. She had a compelling vision to help humanity with technology for blood tests, and her ambition, she said, was driven by a personal fear of needles. She fit the pattern of the young, brilliant college dropout, even dressing like Steve Jobs.

When she founded the unconventional blood-testing company Theranos in 2003, I was relieved to see a woman finally benefit from the hyperbole that dominates venture investing, a world I worked in for nine years, total. Why shouldn’t a woman show the same single-minded confidence that her male peers did? By 2015, Ms. Holmes raised more than $400 million in financing and Theranos was valued at $9 billion. At last, I thought: a charismatic woman with a compelling vision, actually able to raise huge amounts of funding at astronomic valuations.

But after it was revealed that Theranos was not transparent when its blood-testing equipment failed, it became clear that the company would be the exception that proves the rule that tech chief executives rarely face the full consequences of the harm they cause.

Maybe because Ms. Holmes put herself in the medical care business despite not knowing much of anything about health. That’s field where fake it until you make it is a more sinister strategy than, say, selling shoes over the Internet, especially because she never ever had a clue how to make her bad idea work?

I haven’t heard of her bogus blood-testing device outright killing anybody, but it sent multiple people to the emergency room in a panic because it reported they were about to die, only for them to find out at the ER, when their blood was tested by machines that actually work, that they were fine.

Yet Ms. Holmes is also exceptional for the basic fact that she is a woman. Time and again, we see that the boys’ club that is the tech industry supports and protects its own — even when the costs are huge. And when the door cracks open ever so slightly to let a woman in, the same rules don’t apply. Indeed, as Ms. Holmes’s trial for fraud continues in San Jose, it’s clear that two things can be true. She should be held accountable for her actions as chief executive of Theranos. And it can be sexist to hold her accountable for alleged serious wrongdoing and not hold an array of men accountable for reports of wrongdoing or bad judgment.

Questionable, unethical, even dangerous behavior has run rampant in the male-dominated world of tech start-ups. Though never charged with crimes, WeWork’s Adam Neumann and Uber’s Travis Kalanick hyped their way into raising over $10 billion for their companies, claiming they would disrupt their stagnant, tired industries.

For better or worse, Uber did disrupt the taxi business.

The power imbalance between mostly male investors and female entrepreneurs also hasn’t seemed to shift much — much less in a way that would empower or protect founders. In an industry where women founders receive only 11 percent of the seed through early stage funding and 64 percent of venture capital firms in the U.S. do not have any female partners, we should not be surprised. When you consider intersectional data, the bias is even more damning: Venture capitalists only gave a paltry 0.34 percent of funding within the United States to Black women founders in the first six months of this year. Sexism in tech is real and alive.

By the way, Ms. Pao, how is your gay black husband doing with the lawsuits against him alleging financial finagling? Excuse me, or perhaps your gay black ex-husband? From the New York Post:

Buddy Fletcher is so broke he can’t afford his divorce from Ellen Pao, The Post has learned.

The former high-flying hedge fund manager — who once rubbed elbows with Lauren Bacall and Roberta Flack — has no lawyer and is representing himself in a divorce from Pao, the former interim CEO of Reddit. He claims in court papers that the divorce, which is ongoing, left him “homeless” at one point, including a period of living in his car.

The couple — known as much for Pao’s Silicon Valley gender discrimination claims as Fletcher’s financial downfall — have been slowly working toward dissolution of their marriage in San Francisco state court since 2017, but they appear no closer to the end than they did two years ago.

One reason may be that Fletcher keeps making requests for financial assistance, including hard-fought efforts to squash his 2007 pre-nup with Pao, which a judge denied, and repeated requests for spousal support.

… Outside of court on Thursday, he declined to answer questions, including about whether he currently has a job or has plans to pay back his burned investors.

It’s a dramatic change in lifestyle for Fletcher, who once palled around with Bacall, Flack, Steve Buscemi and Gabby Sidibe. Sidibe starred in Lee Daniels’ 2009 hit “Precious,” which Fletcher’s brother, Geoffrey Fletcher, wrote based on the novel “Push” by the author Sapphire.

Fletcher was also known to hang around intellectual elites like Anita Hill and Henry Louis Gates Jr., who were the beneficiaries of a Harvard University fellowship that Fletcher funded in his own name.

Fletcher, whose worth was once estimated at $150 million, made headlines in 2011 for suing the Dakota, where John Lennon was shot. The Harvard graduate had already been approved to buy four apartments in the Dakota, including one for his mother. At the time he filed suit he claimed he was refused permission to buy a fifth apartment because he’s African-American.

The case was ultimately dismissed — but not before it was reported that the Dakota rejected Fletcher for a fifth apartment because of his investment firm’s “apparent lack of profitability.”

Not long after that, Fletcher started facing questions from investors, including three Louisiana pension funds that had invested with Fletcher Asset Management on promises of double-digit returns. That kicked off a series of legal battles and bankruptcy filings that ended up detonating Fletcher’s reputation as a financial wizard.

After his main fund filed for bankruptcy in 2012, it emerged that he had been insolvent for years and had misspent investors’ money, including $8 million to produce “Violet & Daisy,” a film directed by his Oscar-winning writer brother.

Those details came out in a 2013 report by the Manhattan federal bankruptcy trustee, who likened the case to “a Ponzi scheme.”

When Pao filed for divorce from Fletcher in 2017, they had been married for 10 years.

Days before the filing, she moved out of the luxury apartment they shared in downtown San Francisco into a new place she had just purchased at the Ritz-Carlton Club and Residences on Market Street.

Fletcher blasted Pao’s purchase of a condo in the luxury residential skyscraper. In court papers he described it as a “misappropriation of what are in all likelihood community funds in order to buy herself an exorbitant residence — in spite of her insistence on efforts to ‘downsize’ her apparent legion of cooks, nannies and chauffeurs.” …

Fletcher has also asked the court to order Pao to keep distance from him, his home and their daughter, alleging Pao “has threatened more than once to flush our daughter’s fish down the toilet as a punishment which led to our daughter crying.”

… The former hedgie has argued for spousal support on the grounds that he supported Pao for the first few years of the marriage — and now it was her turn to support him.

Pao’s “income has averaged more than $2,000,000 per year for the past three years,” he said. By contrast, he was “homeless and without counsel, at risk of losing my physical health,” he told the court.

Pao has disputed Fletcher’s poverty claims, saying Fletcher couldn’t find a new place to live only because no landlords wanted to rent to the man who sued the Dakota.

“This case is not really about support,” Pao told the judge earlier this year. “Rather, it is about Buddy’s need for money to pay off the judgment against him and his businesses,” she said, referring to a $213 million judgment issued against him by a New York state court, as well as a $1.5 million judgment by the IRS.

Pao, who is now the CEO of her own diversity nonprofit, Project Include, tried to keep all the mud-slinging private by asking the court to seal the case, but was denied.