I'm surprised to learn, on Twitter, that internationally famous policy wonk Matt Yglesias has never heard of the infamous Griggs v. Duke Power decision—and a number of others: 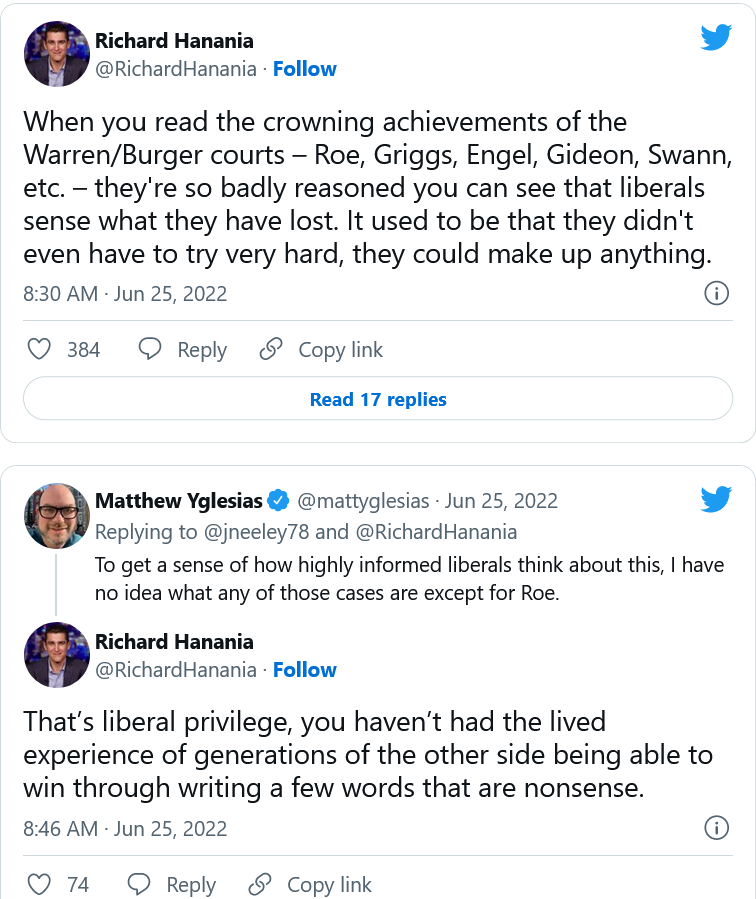 Conservatives have entrenched into law the idea that policies with a “disproportionate impact” on racial minorities don’t constitute an illegal form of discrimination, which may be the wise approach, in which case it may be that Ivy League schools aren’t doing anything illegal to Asian applicants. But it’s clear enough that the structure of their admissions policies has the effect of disadvantaging Asian applicants

Well, no, we haven't entrenched this idea into law, because we can't. Griggs vs. Duke Power, 1971, did entrench into law  "disparate impact" theory, of which,  as I've said before, "The message of Griggs and 'disparate impact' theory: if minorities fail tests at a higher rate than whites, it's the test that's wrong."

If that's not clear enough, maybe I should put it this way: "If blacks do worse than whites in any way (employment tests, IQ tests, admissions tests, criminal records background tests, or random drug tests), it's white people's fault."

We recently saw this when Ibram X. Kendi said that if black kids weren't passing the test to get into Boston Latin School, it couldn't possibly be because they were dumber.

See The Triumph Of Ibram X. Kendi's Logic: The Kids MUST Be Equal, So The Tests Are At Fault.

No way that Griggs survives this court. It just needs to reach it.

For the record, the other Yglesias-unknown cases are "school prayer (Engel v. Vitale)," "taxpayer funded defense lawyers for criminals (Gideon v. Wainwright)"  and "school boards are required to bus black children to white schools and vice versa (Swann v. Charlotte-Mecklenburg Board of Education)."