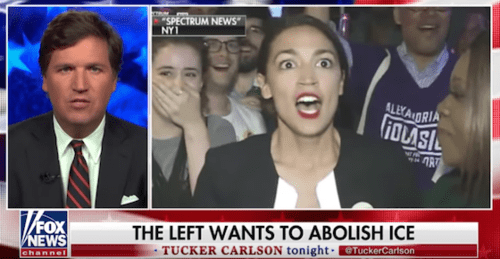 Just when you think the Democrats can’t get any nuttier with their wacky leftism, they do. Now many are openly calling for abolishing the Immigration and Customs Enforcement agency (ICE) and opening up America’s borders to one and all.

That’s odd, since Democrats once claimed to represent working Americans, but that message has disappeared with the party’s rush to diversity and maximum immigration of varying legalities. Clearly those issues cannot coexist, since workers benefit when employment markets are not overwhelmed with job seekers. The principle of supply and demand still rules in the economic universe.

Ex-President Obama recently appeared at a Democrat fundraiser, exhorting party members to get a message beyond just Resistance to Trump, but specifics about what that message should be were not reported.

On Friday, Tucker Carlson sketched out the new Democrat territory.

TUCKER CARLSON: For centuries, America fought crime by hiring police, but now Democrats have a new plan: fire the police and redefine lawbreaking as an act of virtue. If there’s no enforcement, there’s no crime. Well with shocking speed this has become normal on the left to demand the abolition of ICE and the 20,000 agents who work therein and enforce our immigration laws. Just a few weeks ago, it was only a few activists on the far left who were calling for this, and then this week on Tuesday, congressional candidate Alexandria Acacio-Cortez won a Democratic primary against Joe Crowley in New York.

She ran on abolishing ICE, and now in a flash ambitious Democrats are scrambling aboard the bandwagon. Last night for example Senator and career opportunities Kirsten Gillibrand of New York said that she favors abolishing ICE, the opposite of her opinion from a few years ago. Kamala Harris of California says she’s open to that as well. Bill de Blasio, the mayor of New York, has also called for abolishing ICE. So have seven Democrats in the House. This is gathering steam, this idea, and yet no one who’s advocating for it seems to be thinking even for a moment about what the effect would be if we abolished ICE.

For example, as we speak, millions of people want to enter this country. The entire city of Tijuana Mexico is already filled with tens of thousands of would-be asylum seekers from all over the world — Central America, Africa, everywhere, as well as as many as a half a million people who’ve been deported from the United States. The net effect — Tijuana is not a pleasant place to live. What will happen when word gets out that nobody in any country on the globe has anything to fear from our immigration authorities?

If you can make it past our Border Patrol and get a tourist visa you can overstay, and you can never be deported. Once people know that, how many people will move here illegally every year — a million, five million 10 million? Who knows? How many that might be criminals or extremists or future welfare dependents? We don’t know that either. We do know it won’t be long if that happens until dozens of US cities resemble what Tijuana looks like right now.

None of these new anti-ICE lawmakers seem to be asking any of these questions; they don’t seem to care what the answers might be because they’re irrelevant. They know that if we abolish ICE and our borders become irrelevant, they’ll get what they want — a new body of voters who can shove aside the troublesome people who are already American citizens. People demanding the abolition of ICE aren’t looking out for those.