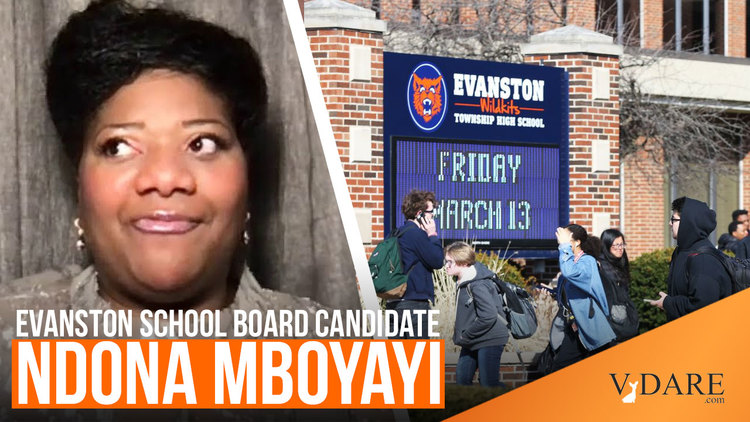 From The Atlantic, Conor Friedersdorf interviews a black woman who lives in Evanston, Illinois, where the white public school students have the highest test scores in the U.S. for whites and there is the third largest white-black test score gap, so the wokeness is especially intense:

‘The Narrative Is, “You Can’t Get Ahead”’
In Evanston, Illinois, a Black parent and school-board candidate takes on a curriculum meant to combat racism.

I have traveled a lot. My father was a university professor and taught in both the United States and Paris, France. And when I visited, I saw white people in public housing. I’ve been to Belgium and Switzerland and seen very poor white people. I’ve visited other parts of Europe. I lived in Canada for 10 years. There are poor white people in Canada as well. I’m not saying systemic racism doesn’t exist, but class exists too, and I don’t believe that all white people have privilege. That white person who’s living in the Appalachian Mountains, who has no means or prospect of changing their situation—do they, too, have privilege? Compared to me and my kids?

I’ve spent a lot of time in Central Africa because my dad is from the Congo. And some of the propaganda that’s being spread right now here in Evanston is similar to some of the divisiveness that took place in Rwanda before the massacre. I’m not saying that is what’s going to happen here, but when you start labeling people in a negative manner based on their race or ethnic group, this leads to division and destruction, not finding common ground and positive solutions.

Is it racist to say that it is silly to worry about all the hate whitey rhetoric in the media these days because African-Americans aren’t capable of organizing something really bad?