CPAC held one of its two conferences this year in Dallas, Texas. It attracted a wide variety of guests and speakers. This was my second CPAC—the first one I attended was in 2019 when they were still held at the National Harbor in Maryland.

On the first day, the hotel was crawling with MainStream Media journalists, all interested in Prime Minister of Hungary Viktor Orban. His presence at the conference created a stir among the media class and CPAC attendees alike. I watched Texas Governor Greg Abbott’s speech before Orban. The governor drew a lackluster attendance in a conference which was held in his own state. The Prime Minister had almost twice the attendees show up and was met with cheers.

His speech touched on fighting the Left, securing the border and pro-family policies. Orban also drew a very small group of protesters in the lobby area.

Typically, CPAC had only one (1!) panel on the issue of immigration, called “Biden’s border crisis.” In it they had Congresswoman Mayra Flores, former ICE director Tom Homan and Arizona Republican gubernatorial nominee Kari Lake. Lake talked about her plan to declare an invasion and finish the wall if elected governor. Tom Homan laid out the case for impeaching Biden over the border crisis and also attacked Homeland Security Secretary Mayorkas, who elicited loud boos from the audience. Attendees are paying attention to immigration regardless of what CPAC management wants.

Mayra Flores, recently elected to a South Texas seat, talked about border security measures. However, she was one of the Republicans who voted for a recent Amnesty and in the panel she spoke about “the need to fix the legal process” to make it easier for people to come in legally.

Kevin McCarthy, the House Minority Leader, is not a popular guy at CPAC. Many grassroots Republicans believe that McCarthy is a RINO. He was notably absent, and Rep. Matt Gaetz even said in a CPAC conversation with Steve Bannon that McCarthy should not be leader of the GOP caucus.

The influence of Gaetz and Congresswoman Marjorie Taylor Greene is higher than that of McCarthy. This was very evident at CPAC, where MTG and Gaetz are seen as celebrities. I spoke off the record to a GOP congressman for a few minutes, and he was very critical of McCarthy, and mentioned that he would like to see an alternative as Speaker. If McCarthy is Speaker of the House next year, he will have to deal with a very vocal MAGA caucus.

The conference ended with a speech from President Trump himself.

In the CPAC straw poll Trump received a resounding 99% approval from CPAC attendees and 69% of support in a 2024 GOP primary. The 1% who disapprove of Trump are likely either the journalists at the event or people who misread the question!

However, Trump’s speech did not address the issue of legal immigration. He did call what is happening on the Southern border an invasion. He also outlined policies such as increasing the number of ICE and Border Patrol officers and finishing the wall.

Trump’s immigration comments received enthusiastic cheers. In the CPAC straw poll, the border wall and immigration issue ranked second place behind election integrity. It even placed higher than inflation and the economy. The Ukraine war was ranked at the bottom.

Immigration will be vital for the midterms. Even the Gallup poll has shown an increase in Americans who want less immigration. If Republicans want to win, they cannot ignore the issue. 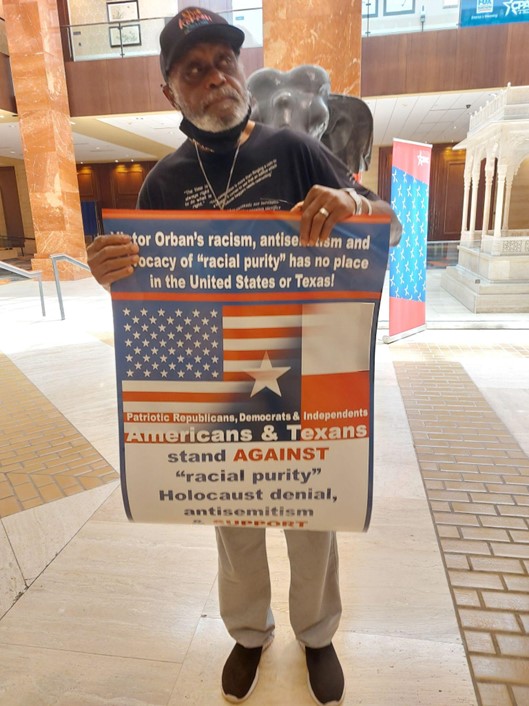 Anti-Orban protester in the hotel lobby. I saw very few protesters that weekend. He was with a small group of about three to five. 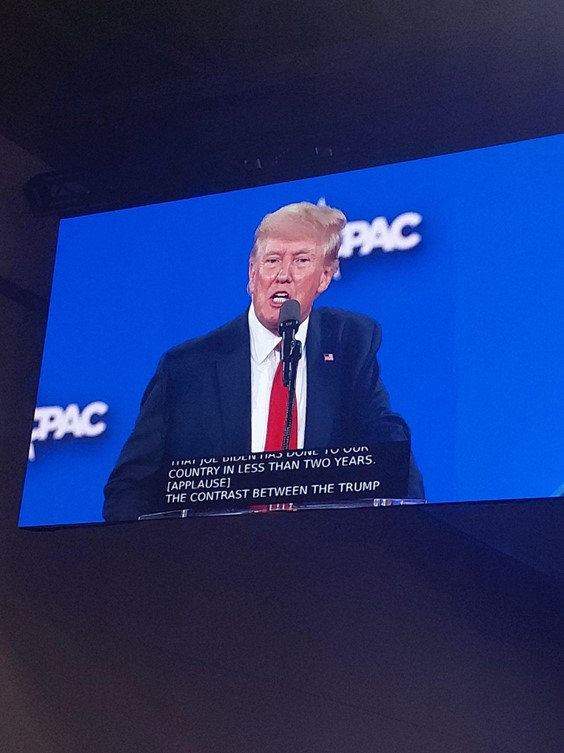 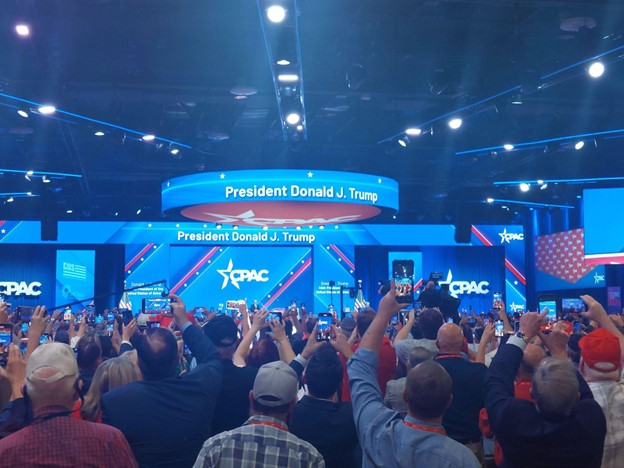 Trump coming out to speak to a very friendly crowd. He received near unanimous approval from CPAC attendees (99%).