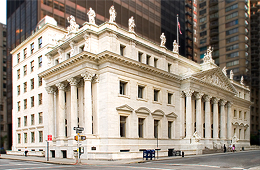 The U.S. Supreme Court dispensed a smidgen of common sense in 2002 with a ruling that illegal aliens could not recover lost wages because, well, they could not have legally earned them in the first place.

However, in direct defiance of that ruling, an appellate court in New York has ruled that illegal aliens can collect back wages at their home country's rate. [Sanango v 200 E. 16th St. Hous. Corp.]

A jury handed Arcenio Sanango, an Ecuadoran illegal who fell from a ladder at a Manhattan worksite, $96,000 in lost earnings, both past and future.  The award in U.S. dollars couldn't be upheld, the appellate judges acknowledged, so they remanded for a recalculation based on the Ecuadoran pay scale.

"We are unaware... of any federal policy that would be offended by awarding an undocumented alien damages for lost earnings based on the prevailing wage in the alien's country of origin," wrote Justice David Friedman.

Uh, how about that big one that says illegal aliens aren't supposed to be here to begin with?

But here's an idea: By the same token, are illegal aliens who commit crimes in America entitled to "home country" criminal procedure?

If so, we could get confessions with a bullwhip.