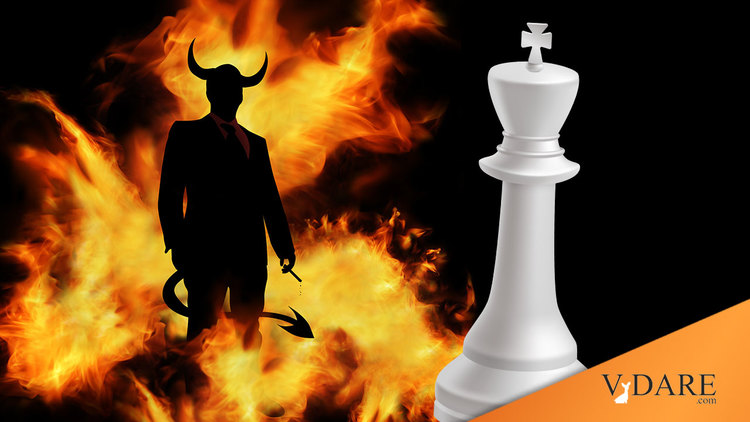 Harry Baldwin writes: “Unfortunately, great commenters come and go at iSteve. I keep a word file of some of the insights. The following was from ’Drake,’ posting on December 17, 2014”:

Liberalism is too sophisticated to just come out and say “whites are devils.” Instead it says lots of other things that indirectly add up to the same thing.

There are two ways racism can work. Let’s use a chess king on a chessboard as a metaphor. If you wanted to totally denigrate everything the chess piece does, you could point to it and call it the “n-word.” No matter what move the king makes, it still carries the n-word around, and is thereby stigmatized. (As Malcolm X said: even when a black man earns a Ph.D., he’s still just a n-word.) That’s how old-fashioned KKK racism works.

But liberal anti-white bigotry works differently. Instead of pointing to the king and calling it a nasty word, it exhaustively analyses every individual move the piece could make and declares each move to be sinister and evil. It moves up: that’s racist. It moves down: that’s white privilege. It moves left: that’s gentrification. It moves right: that’s white flight. It moves diagonal: that’s a microaggression, or cultural appropriation, or some other inane nonsense. It gets attacked by Muslims: it’s planning a racist backlash. And so on and so on, putting whites under a microscope, looking at every thought, word and act in the worst possible light, blaming them for every problem, or just making up slander (the tyranny part of anarcho-tyranny).

This is a lot more work than old-fashioned racism, but liberalism has no shortage of intellectuals willing to do that work. And through it all they never come out and say “Whites are devils” but it all adds up to the same thing.