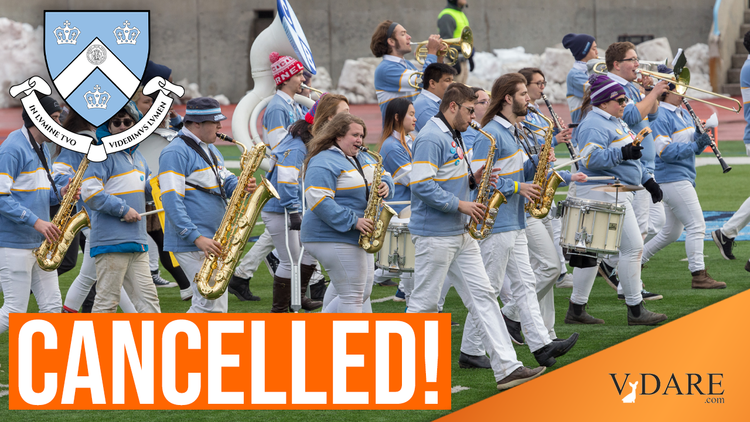 Columbia U. Marching Band Disbands for Its History of UnWokeness 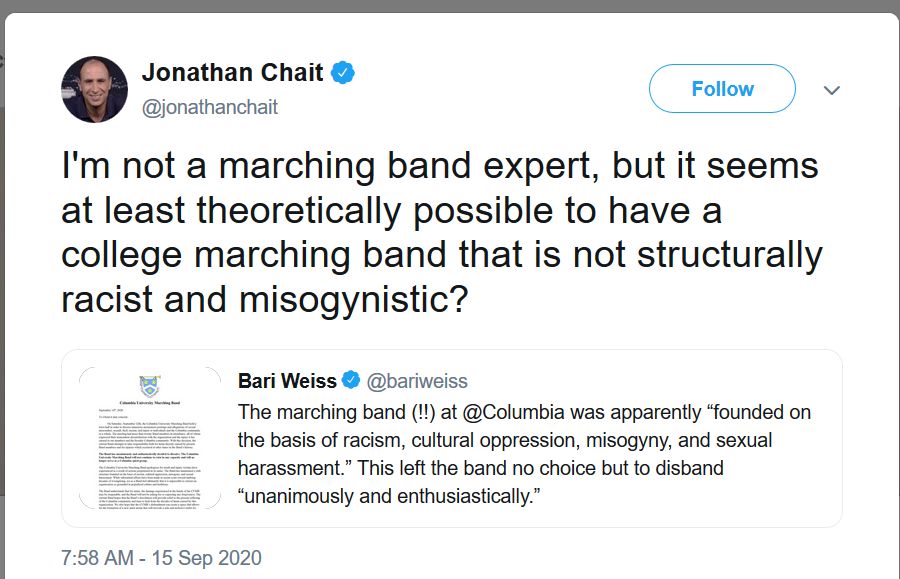 From the Columbia University Spectator:

After a history of disagreements with University administration and students, the Columbia University Marching Band voted to disband on Saturday night.

The self-proclaimed “cleverest band in the world” voted to disband the organization on Saturday evening after 116 years of performing music, making controversial jokes, and disputing with both Columbia’s administration and the student body.

In a statement provided to Spectator by band leadership, the club’s leadership, known as the Bored, wrote, “The Band has unanimously and enthusiastically decided to dissolve. The Columbia University Marching Band will not continue to exist in any capacity and will no longer serve as a Columbia spirit group.”

Columbia has a “scramble band” much like Rice U. and the Stanford band that got dented by the Cal player on the triumphant last play of the 1982 Cal-Stanford big game:

The point of a scramble band at a difficult college like Columbia or Rice (I don’t know what Stanford’s excuse is other than they are Stanford) is that instead of practicing endlessly like Ohio State’s band does so that they can play and march simultaneously, a scramble band just runs from one static position to another spelling out a funny thing and then plays music once they are in place.

For example, in 1973 the Rice Marching Owl Band (MOB) formed a fire hydrant as an insult to the visiting Texas A&M Aggies and their mascot dog Reveille.

When James Sykes ran back a kickoff in the last moments to win the game for Rice, the more numerous A&M fans went berserk and held the M.O.B. hostage in their own stadium for two hours after the game until the Rice food service vans carted them off the field.

The point is that a scramble band isn’t sufficiently woke for 2020.

Whether this is a joke or dead serious, I dunno.