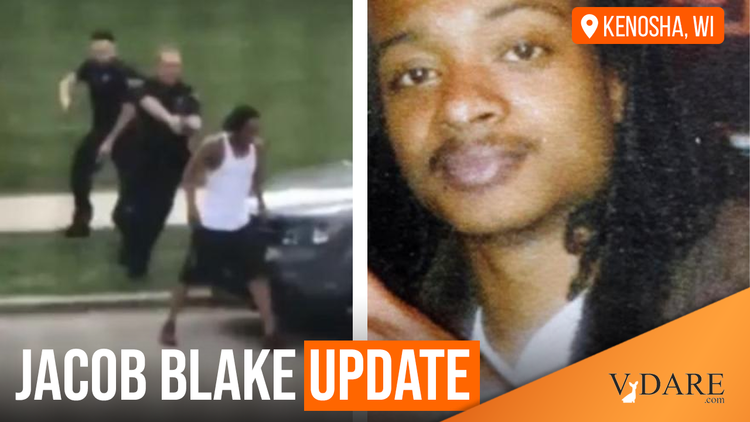 From CNN, a report on the Kenosha Kase validating my surmise back in August that it was the usual type of domestic dispute that gets more than a few ex-boyfriends shot by the cops each year (but when they are white, nobody cares):

Lawyer says cop shot Jacob Blake after hearing a mother’s desperate plea: ‘He’s got my kid. He’s got my keys’

(CNN) Police Officer Rusten Sheskey has told investigators that it wasn’t just his life he was defending when he fired his weapon seven times at Jacob Blake last month in Kenosha, Wisconsin. He said he used deadly force during the chaotic encounter because he was afraid Blake, while attempting to flee the scene, was trying to kidnap a child in the backseat of the vehicle.

“He’s got my kid. He’s got my keys,” Sheskey heard a woman say, according to attorney Brendan Matthews, who is representing the officer. If Sheskey had allowed Blake to drive away and something happened to the child “the question would have been ‘why didn’t you do something?'” Matthews said.

That explanation, provided in an exclusive interview with CNN, offers the most detailed rationale to date for Sheskey’s highly scrutinized decision to shoot Blake, who is Black, as he leaned into an SUV with his children inside it on August 23.

… Matthews directly disputed assertions by Blake’s family and lawyers that he was unarmed and posed no threat to the officers.

At the time Sheskey opened fire, the lawyer said, Blake held a knife in his hand and twisted his body toward the officer. That action is not visible in the video widely circulating on the internet, in which the view of Blake’s body is partially obscured by the driver’s side door of the SUV.

Matthews said a second officer at the scene, whom he also represents, provided investigators with a similar account of Blake turning toward Sheskey with a knife in his hand immediately prior to the shooting. That officer said he too would have opened fire but did not have a clear angle, according to the lawyer.

… The shooting occurred minutes after Sheskey and fellow officers responded to a call of “family trouble” in a neighborhood a couple of miles northwest of downtown Kenosha. According to a dispatch log, a woman reported to police that Blake had taken her keys and would not give them back. Blake’s family members later said he’d been attending a birthday party for one of his kids.

Once at the scene, Sheskey watched Blake put one child in the car as he arrived but was unaware that two more children were already in the vehicle, Matthews said. Another officer heard a woman yelling that Blake had her children, he said, but did not see the kids in the car.

Some of what officers say happened next was described in a press release issued by the police association last month.

Which I posted back in August.

Anyway, it just sounds like a typical domestic disturbance call with a separated father and mother disputing over who gets the kids and the car, and the participants get out of control.

Do other countries have better ways for cops to handle these situations? How about, say, Finland? Finland has lots of guns, axes, and binge drinkers. What do the police do in this kind of situation there?