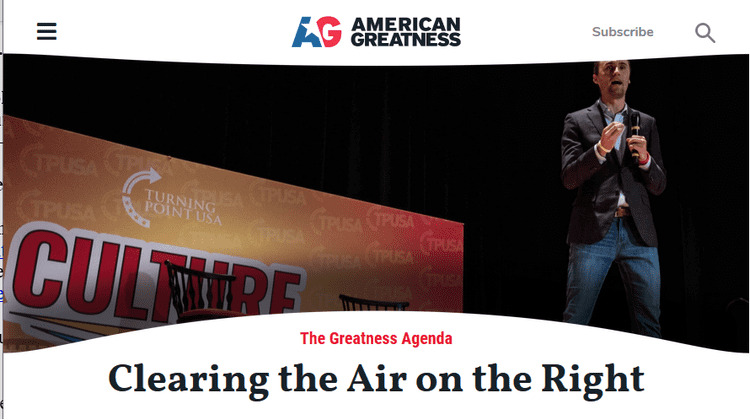 Charlie Kirk Surrenders To The Groypers?

Turning Point USA founder Charlie Kirk may want to surrender in the Groyper War. In an article for American Greatness last week, Kirk took a immigration reductionist line while toning down his critiques of America First nationalists. [Clearing the Air on the Right, by Charlie Kirk, American Greatness, November 21, 2019]

He admitted it was wrong to want more F-1 and H1-B visas and said we should prioritize high-skilled Americans over high-skilled immigrants. (Curiously, he did not take back his support for the EB-5 visa which benefits foreign oligarchs.) He argued that the base feels betrayed by Republican leaders on immigration and traced this betrayal back to Ronald Reagan’s amnesty.

Kirk outlined a solid immigration policy in the article.

Here are some immigration policies I do support: building the wall as a first priority; ending birthright citizenship; establishing English as the official language of the United States; ending chain migration and the visa lottery; lowering overall legal immigration levels; and dramatically increasing enforcement of E-Verify and visa overstays.

He also reiterated his support for the RAISE Act, which would halve legal immigration.

However, he rejected racial considerations in the immigration debate. He also believes conservatives can somehow win over immigrant voters.

While I vehemently reject the notion that the melanin content in someone’s skin determines their views and voting patterns, it’s plain that culture plays a significant role at the ballot box. It means conservatives must do a better job winning over minority voters of all varieties—both native- and foreign-born.

New immigrant waves to America trend progressive upon arrival, partly because of their native cultures, but also because Democrats promise to give them more stuff. We have to reach out to these communities, not alienate them with anti-immigrant rhetoric that signals they are not welcome as conservatives.

We need to remind immigrants who are already here that the reason they wanted to be in American in the first place is because we are different—and better—than the places they just left or fled, and if they want to contribute to the greatness of America they must oppose the empty promises of socialism.

He concluded the immigration section of the article with this strong opinion.

Any solution to our current immigration crisis must include addressing both illegal and legal immigration. Any measure that doesn’t will signal betrayal to the conservative base.

The article signals that the groypers are having a positive effect on Kirk. The TPUSA founder realizes that Donald Trump’s base wants immigration restriction and is capitulating to their demands. He now just needs to stop regurgitating the Southern Poverty Law Center’s opinions about America First nationalists.