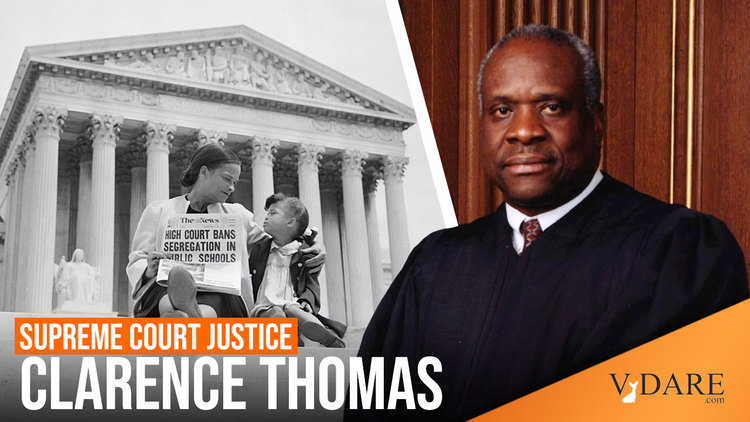 Can Supreme Court Precedents Be Reversed (Or Re-Reversed?) Clarence Thomas Thinks So, Although He Might Not Agree With Our Choices

Law professor Josh Blackman (who's been attacked while trying to give a speech at CUNY, because he's actually a white man who believes in free speech) had a story about Clarence Thomas wanting to revisit the 1950 Feres decision, which says, briefly, that soldiers can't sue the Army for negligence.

In 1950, Justice Jackson wrote the majority opinion in Feres v. United States. He held that members of the military cannot sue the government for injuries "incident to service," even if the activities are unrelated to combat. For decades, Justices Scalia and Thomas have argued that this precedent is inconsistent with the Federal Torts Claims Act. And for decades, litigants have asked the Court to reconsider this precedent. The latest petition came from Jane Doe, a West Point cadet who alleged she was raped by another cadet. Under the Feres doctrine, her claim was dismissed.

Today, the Supreme Court denied Doe's cert petition. Justice Thomas dissented from the denial of cert. He recounted the flaws with Feres, stretching back to a 1987 Scalia dissent….

Justice Scalia was willing to call out Feres on his very first term on the bench. Yet, the three Trump appointees are silent. Do they agree with Feres? Do they think this precedent is too well settled? Or is the thought of reversing Justice Jackson too much to bear? And really, this vehicle would be a perfect way to build consensus on overruling erroneous precedents. The only reliance interests favor the government keeping damages claims out of court. And Congress could easily remedy this decision if the Court messed up. Would Kagan and Sotomayor really stand by precedent to maintain a rule that bars rape allegations from federal court? Justice Ginsburg was willing to revisit the Feres doctrine in 2019. This case seems to be an excellent vehicle. Thomas plus three equals cert. Alas, silence….

Justice Thomas suggests that his colleagues may be uncomfortable with wiping out a seventy year old precedent. And he includes a lengthy string cite of precedents that were overruled:

I can quibble with a few of these items. Trump v. Hawaii did not overrule Korematsu. The "Court of History" is not a real Court. And Brown did not really overrule Plessy. Chief Justice Warren merely said "separate but equal" has no place in the doctrine of public education. But a useful string citation no less.

Wiping out a Justice Jackson opinion may be too much to bear.

Our frequent correspondent "Talk Radio Listener" writes to ask if the Trump appointees (Gorsuch, Kavanaugh, and Barrett) are ever going to overrule any Supreme Court precedent.

Good question. One thing Robert Bork pointed out, and was hated for doing so, is that if the Supreme Court is a constitutional court, basing its rulings on the Constitution as amended, if they get one wrong, they can change their minds.

This the Court is reluctant to do, and as Blackman points out, Brown didn't actually reverse Plessy's separate but equal doctrine, and Congress had to actually pass a law (the Civil Rights Act of 1964) to make, for example, hotels and restaurants required to serve blacks nationwide.

One of the things that made Bork unacceptable to the Goodthinkful is that he thought Shelley v. Kraemer, a 1948 decision on racial covenants on property deeds, had been wrongly decided [Why Judge Bork Is Unacceptable, by William T. Coleman, NYT, September 15, 1987].

We conservatives think a lot of things have been wrongly decided by the Supreme Court, and that includes some of the modern 14th Amendment jurisprudence on racial segregation, de jure and de facto, and "disparate impact."

For more on one decision Justice Thomas might not want revisited, see

UPDATE: As Peter Brimelow pointed out to me, one of the decisions Thomas disagrees with is New York Times Co. v. Sullivan, which gave the media the right to lie about anyone who can be called a "public figure"...including, repeatedly, Thomas himself [Clarence Thomas is right: Here's why Supreme Court should revisit libel law overreach, by Glenn Harlan Reynolds, USA Today, February 28, 2019]. The need to revisit this is part of why VDARE.com is suing the New York Times, see here for details, or go here to donate in support.