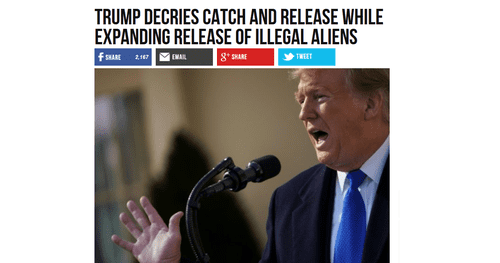 It doesn't matter how good a wall we put on the border, if we continue to practice the insane "catch-and-release" policy, a wall would be a waste of resources.

Every single person detained on the border ought to remain in detention until deportation. Catch and release is just a slightly-delayed from of open borders.

Trump is aware that catch and release is a bad policy, but he needs to end it. And Trump supporters ought to be demanding that he do so.

During a press conference in the White House Rose Garden on Friday morning [Feb. 15], President Trump decried the Catch and Release program while a Republican-Democrat spending bill he is expected to sign will expand the release of illegal aliens and border crossers into the United States.

“We have a real problem, we have Catch and Release,” Trump said in the Rose Garden. “You catch a criminal and you have to release him.”

Well yeah, it's a stupid policy. So why expand it?

About 99 percent of border crossers and illegal aliens who are put into ATD programs and released into the interior of the U.S. are never deported.

One of the most often used components of the ATDs is illegal aliens being released into the U.S. with ankle monitors on. DHS officials, though, have previously told Breitbart News the monitors are extremely ineffective. “According to ICE, about a third of the people who are put on ATD cut off their monitor right away,” Center for Immigration Studies Director of Policy Jessica Vaughan told Breitbart News. “There are stories … one, in particular, a government contractor that operates most of the ATD programs for ICE, they used to go to the Phoenix bus station and pick up all the monitors that were found in the men’s bathroom trash can from people cutting them off.”

And yet, the program is being expanded.

While expanding Catch and Release, the spending bill provides about $1.3 billion for 55 miles of a border wall, far less than the $5.7 billion that Trump requested and an amnesty pipeline for all illegal aliens who have any connection to an Unaccompanied Alien Child (UAC).

That's another insane policy, giving anybody who claims a connection to an "Unaccompanied Alien Child" a de facto amnesty.