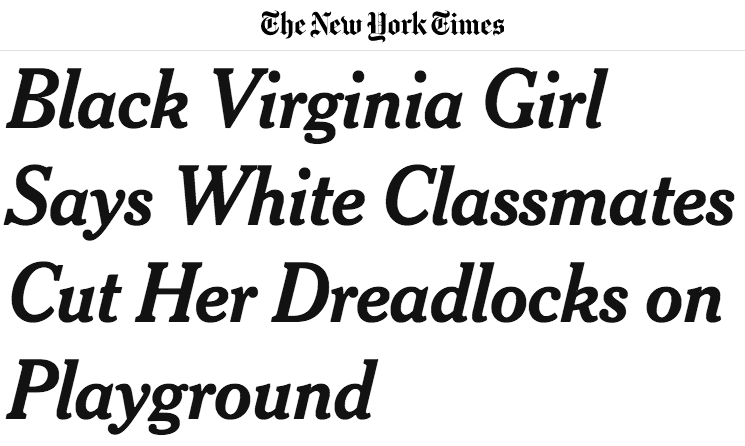 The police said they were investigating a report by 12-year-old AA that three white students forcibly cut portions of her hair at their Christian school.

The police in Northern Virginia are investigating a report by a black 12-year-old girl that three white boys in her grade held her down, covered her mouth and cut off lengths of her dreadlocks on a playground at their private Christian school.

The girl, AA, who is in sixth grade,

and her family said the assault happened on Monday during recess on the playground of the school, Immanuel Christian School in Springfield.

They said the three boys, whom they would not name, had been bullying A since the start of the school year in August.

“They put me on the ground,” A said on Friday in a phone interview. “One of them put my hands behind my back. One put his hands over my mouth. One cut my hair. They were saying that my hair was ugly, that it was nappy.”

… The school said it had no record of A previously being bullied, according to an email sent Friday on behalf of Mr. Danish.

Cynthia A, who is A’s grandmother and legal guardian, said in an interview on Friday that A was initially hesitant to tell her what happened to her hair, but that on Wednesday she finally broke down crying about the episode.

“They called her ugly and told her she should not be alive,” Ms. A said. “They said she shouldn’t have been born.”

Ms. A said that the family immediately reported the assault to the police and that the middle school principal called her Wednesday night to ask if she had filed a report and for the name of the police officer involved.

A said that she did not know what had prompted the boys to start bullying her in August, and that she was too traumatized to open up about the assault at first.

A said the boys had previously taken away her lunches.

“They would eat it in front of me and say that I didn’t deserve to eat — that I should just starve.”

A’s grandparents, who are both church pastors, have kept her home since the family met with school officials on Thursday morning. She said she missed her friends and had school work to catch up on.

Immanuel Christian School is a private Christian school that enrolls kindergartners through eighth graders at its campus in Springfield, which is 15 miles southwest of Washington. Karen Pence, the wife of Vice President Mike Pence, accepted a part-time art teaching position there in January.

So, therefore, after Trump is impeached and convicted, then VP Pence must resign over Napgate, making Nancy Pelosi … President!

Immanuel Christian’s website — which describes the school’s expectations of students, parents and guardians, and its employees — says that it does not accept gay students and that it requires employees to affirm that marriage should be between one man and one woman.

See, it all ties together! There’s a seamless Web of Hate that ties together homophobia, the Pences, and how privileged white males obsess over their hatred of black women’s hair.