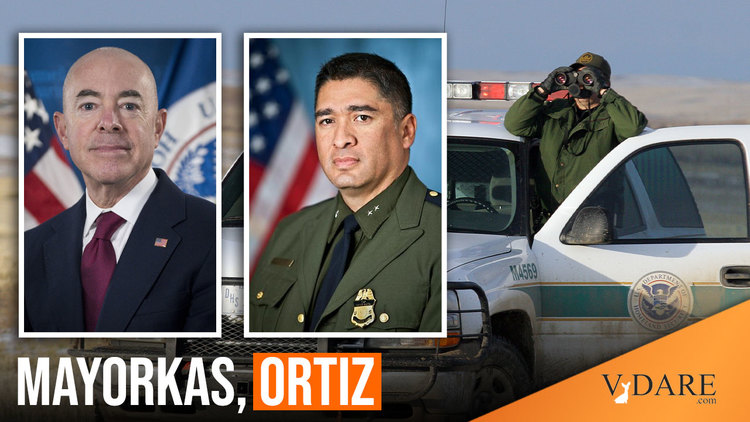 See also: Agents Confront Border Patrol Chief Raul Ortiz: We Signed Up To "Defend The Constitution," Not Allow "Illegal Aliens To Be Dropped Off In Communities"

In a similar vein to the above, DHS Secretary Alejandro Mayorkas talked with Border Patrol Agents, too. Townhall has the audio [EXCLUSIVE: DHS Secretary Had a Disastrous Meeting with Border Patrol Agents, by Julio Rosas, TownHall, January 26, 2022]. Honestly, the audio is terrible. However, the Agent taking the audio had a certain amount of guts in doing so. I wouldn't be surprised if there is an investigation trying to find both the Agent who recorded this and the prior Agent who took video of Ortiz. There are rules that the regular Agents are not allowed to talk to the media, after all. Only union representatives and certain designated Border Patrol personnel are supposed to talk to the media.

For those of you who don't know how these town hall–style meetings go, Agents are normally busy throughout their shifts, especially with what is happening now on the southern border. To get a room full of Agents requires neglecting a whole lot of work going on. At around minute 30 of the interview, one of the Agents asks Mayorkas about this. The Agent said that buses came in from surrounding stations to take all the illegal aliens away to be processed elsewhere. This freed up the Agents in Yuma to attend the town hall. Of course, this meant that some other poor schmucks at the other stations were being swamped with more aliens than they could handle. Mayorkas deflected that question and said that Border Patrol management would better be able to respond to why that was done.

It was a phenomenon I observed during the Trump Presidency too. We would be processing and releasing aliens with general chaos going on. When the aliens were trucked off to bus stations or to Catholic Charities and we finally got a little peace, then strangely some Border Patrol A-Chief would show up with some VIPs from Washington, D.C. to show the big wigs around.

I was always puzzled by this. Didn't the Border Patrol want to show the higher-ups just exactly how bad it was rather than sweep it under the carpet? Apparently not: our management would rather show the Big Wigs our least bad moments rather than show them what the madness truly looked like. Careerists trying to show themselves in the best light, not what might be best for the American people.

Unseen by the audio was when one of the Agents asked Mayorkas a question and then turned his back on Mayorkas. Mayorkas somewhat disingenuously said "You may turn your back on me, but I will never turn my back on you." Of course, Mayorkas hasn't turned his back on the Border Patrol. It's impossible to screw someone so thoroughly with your back turned to them.

I recall reading a book by a Vietnam veteran where the veteran was saying how one of the Vietnamese he had met told him that you can sell anything to Americans if you would just smile at them. Mayorkas isn't smiling, but he does speak in slow measured terms with his eyebrows raised as if to convey a false sense of honesty.

Mayorkas was quick to bring up death threats he and his family have been receiving. The highest ideal for a liberal seems to be being identified as a victim. Whether it’s trying to show Haitian immigrants being falsely whipped or even "Thelma and Louise" as rape victims, it's as if their highest ideal is to be a victim, as if all victims are automatically saints and virtuous. I guess in their mind it gives them victim points that they can then cash in. Years ago, I recall reading the tale of a Holocaust survivor. Interestingly, despite nearly dying, once liberated, the petty crooks went back to being petty crooks and the honest people went back to trying to do things honestly. Being victimized did not make some people automatically good. Put another way, just because your enemy is bad does not make you good. As for Mayorkas, just because some nut threatened your wife and kids does not mean that what you are doing is right.

Mayorkas has pulled this sort of stunt before when being questioned by Senator Kennedy of Louisiana. Mayorkas was quick to bring up that he (Mayorkas) was born in Cuba and came to the United States as a refugee. I guess he thought it would get him some victim points for having been a refugee. Instead, it makes him look like an ingrate willing to destroy the land which helped him and his family.