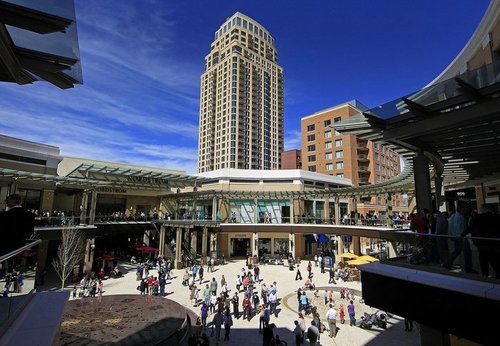 Awhile ago, in explaining the real reasons behind Newsweek’s cover story about how the Ogden metropolitan statistical area in exurban Salt Lake City has the least inequality in the country, I pointed out that Ogden was second to Provo, Utah in having the biggest gender gap in wages in the country. Now Bloomberg has a story on how the Utah social model of affordable family formation is succeeding and, therefore, must be torn down in the name of feminism:

Why Utah Can’t Afford To Keep Its 1970s Gender Gaps

Utah is 'two generations’ behind U.S. in women’s metrics

“I realized that maybe they’d never had a woman in the room before,” the Atlanta native says in her soft drawl about representatives from the real-estate-development arm of the Church of Jesus Christ of Latter Day Saints, commonly known as the Mormon church. “Some of them were looking a little uncomfortable.”

Today, as general manager of City Creek Center, an 800,000-square foot expanse of flowing brooks and rose-colored brick whose wares include True Religion Jeans and the Book of Mormon, Wardell is still often the lone woman in meetings.

Except now she’s also part of a pack of mostly female executives, and some men, determined to drag the state’s workplaces out of the 1970s.

In many respects, Utah, whose state symbol is a beehive, is a model of industriousness for the rest of the nation. Its economy is among the fastest growing and its unemployment rate is the sixth lowest.

So many technology companies — including Google Inc., EBay Inc. and Adobe Systems Inc. — have clustered in Salt Lake, Ogden and Provo that the area’s been dubbed Silicon Slopes. Part of the attraction is a workforce with Mormons who learned languages and entrepreneurial skills during missions abroad, according to Mark Muro, a senior fellow at the Brookings Institution in Washington. Throw in accommodating taxes, a top university and the state’s natural beauty, and Utah may be the ideal business destination.

But it’s a different story if you’re a working woman.

Women often find their aspirations stifled by what many in Salt Lake delicately refer to as “the culture.” The Mormon church lays out a division of labor “by divine design” — men are providers; women are nurturers. Once children arrive, mothers tend to quit school or work.

Utah ranks last in the U.S. for the percentage of mothers with young children in the labor force, at 52.8 percent. That’s 42.7 percentage points — the biggest gap in the nation — behind working fathers. Though the state has the highest U.S. birth rate, it ranks 48th for affordability and availability of child care, according to the Institute for Women’s Policy Research in Washington. Paid maternity leave is rare.

Women also are less represented on campuses, with Utah one of the few states where male students still outnumber female. Graduation rates at public institutions run almost 10 percentage points below the national average for women. All this leads to a grim gender wage gap: Working Utah women collect 70 cents for every dollar paid to men, again 48th in the country.

“By every major metric, we’re about two generations behind the nation,” says Pamela Perlich, a demographer at the University of Utah.

But with unemployment of just 3.7 percent in August and job growth of 4 percent a year, Utah can no longer afford to keep half of its population underemployed. Former Democratic state legislator Patricia Jones has taken up the cause through the newly created Women’s Leadership Institute. The silver-haired 65-year-old with the red Lexus sports car got a boost out of the starting gates from a New York Post article that lumped Utah with Saudi Arabia and Indonesia as places where “sexism reaches into the highest echelons of government.”

“It was really an affront to people here,” says Jones, who grew up in a non-practicing Mormon home with a working mother.

She used the resulting embarrassment to help enlist what she calls “men of influence,” recruiting public officeholders such as Salt Lake County’s mayor, Democrat Ben McAdams, and the state’s Lieutenant Governor, Republican Spencer Cox. The pair — both boyish looking 40-year-olds — appeared in a corny video promoting women’s leadership while riding a bicycle built for two past the state capitol.

So far, 64 organizations have signed on, from national businesses with local offices such as American Express Co. to Utah-based companies including natural-gas giant Questar Corp. and Zions Bancorporation, an institution with $58 billion in assets and operations throughout the Western U.S.

Who could have imagined that corporations would unite to demand a larger supply of labor?

Among her most avid men of influence is Scott Anderson, chief executive officer of the Zions First National Bank subsidiary, which traces its roots back to 1873 and Mormon leader Brigham Young. Anderson — a 68-year-old descendant of the pioneers who entered Salt Lake Valley on July 24, 1847 — began promoting a more robust role for women after retaining a firm Jones ran to conduct market research more than a decade ago. Customers were asked to describe what Zions would look like if it were a person.

“They said, ‘You’re an overweight, balding, middle-aged man,’” he recalls, arching his eyebrows in dismay.

Disturbed at their perception, Anderson set about promoting women’s groups, mentoring and training programs, scholarships, flexible working hours and the like. …

I.e., The CEO is not one of those repulsive overweight, balding, work-a-daddies whose salaries he can cut if this elite push to get more women into the workforce succeeds.

“You can get a better workforce, a more productive workforce; you can get better decision making done and be more successful in selling your wares.”

Many Utah women still find the long-held assumptions of their church and family daunting to overcome.

“The majority of my friends from high school are home with children,” says 29-year-old executive recruiter Ema Ostarcevic, who was born in Croatia and whose family isn’t Mormon. “I can count on one hand how many aren’t.”