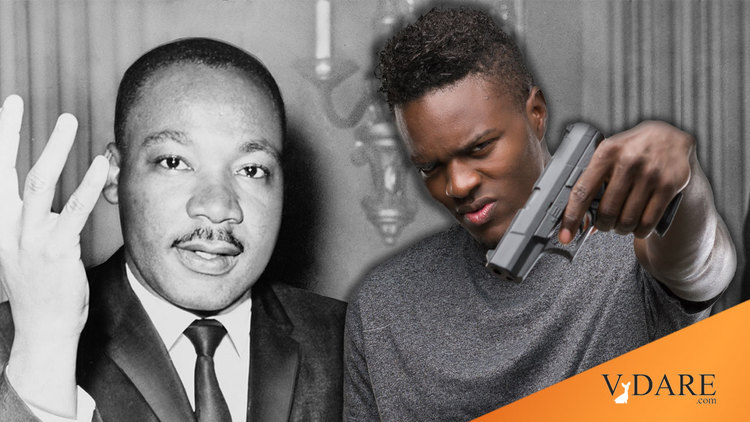 When you understand the joke of Black Lives Matter, you’ll be able to truly comprehend the punchline.

Black folks, we must honor Dr. King this way: Stop killing each other. Especially our children, by Roy S. Johnson | rjohnson@al.com , AL.com, January 17, 2022

I don’t want to see another balloon rise toward the clouds to honor a dead child. An innocent dead child.

I don’t want to hear another mother’s anguish, see another father’s tears, or watch another teenager cling to a friend as they share a kind of grief no young person should bear.

I don’t want to look at another child’s eyes, see them smile, hear them giggle like kids do, and think: It could have been them.

Today, as we do each January, we should do—all of us—we’ll honor the life, legacy and sacrifice of Dr. Martin Luther King Jr. We’ll re-read his salient quotes, most of which are as relevant today, sadly, as they were last century.

We’ll dream, of course. We’ll relive Dr. King’s historic speech on the steps of the Lincoln Memorial nearly six decades ago. Some conveniently recall only those portions of the discourse that soothe their discomfort, that assuages their guilt. The rest of us must remind them of the hard truth of which Dr. King espoused that day on the nation’s stark economic inequity.

“America has given the Negro people a bad check,” he said, “a check which has come back marked insufficient funds. But we refuse to believe that the bank of justice is bankrupt. So, we’ve come to cash this check, a check that will give us upon demand the riches of freedom and the security of justice.”

We’ll hold hands, too, and sing, We Shall Overcome. Some day.

We’ll do all those things, as we should. All of us.

Black folks, we must do more. On this day and beyond, we must honor Dr. King in the way that matters most right now. We must stop killing each other.

The spate of murders among our own – especially our children – is our second pandemic. For this one, we are the only vaccine.

Those aren’t easy words to write. Though they are our hard truth.

They’re not as empowering as chronicling the myriad injustices perpetrated against us. The unjustified murders of Black men and Black women by police nationwide. The heinous attacks against Black people living life. Against Black people jogging.

Not as bold as exposing Karen and Ken—bless their hearts—white people who call 911 at the first sign of Blackness.

Certainly not as gratifying as chronicling the shifting scales of justice as juries return guilty verdicts against defendants who would have all but surely walked not too long ago. Like George Zimmerman, nearly a decade ago.

Oh, I’ve written about crimes perpetrated by us against us. It’s never easy. Hard truths never are.

Last week, I watched baby blue and gold balloons rise skyward behind the A.G. Gaston Boys & Girls Club in west Birmingham to honor the life of 16-year-old Yasmine Wright. She was killed just days before by a murderer’s bullet not intended for her as she rode home from work with her great aunt. I saw teen girls crying on each other’s shoulders, holding each other steady. I saw Wenonah High School girls donning black sweatshirts decorated with a montage of photos of their now-gone friend above these words: Always & Forever Our Golden Girl.

It could have been them, I thought. Any of them.

Indeed, the night before, 18-year-old De’Undray Nakil Haggard, a senior at A.H. Parker High School, was killed by gunfire by a suspect he met outside an apartment in the Kimbrough Homes community.

And we must never forget Aniah Blanchard. Or Kamille “Cupcake” McKinney. And so many more.

Wright, Haggard, and Blanchard were among too many Black youths killed by gunshots in Alabama and nationwide. At least one child is shot each hour of every day, according to The Washington Post. In 2020, more than 2,200 youths in the U.S. died from gunshots, easily the highest in decades. Not all of them are Black, of course. But the hard truth is so many of them are.

Days before she was murdered, Wright was informed she’d been selected as the Boys & Girls Club Youth of the Year, an honor that afforded her the right to represent the club nationally.

Before the balloon release, club COO Devin Posey stood on a stage before more than a hundred youth, sharing memories of Yasmine. At one juncture he expressed misgivings about the ubiquitous slogan: Black Lives Matter. “We come together when they [whites] do it to us,” he said. “We remain silent when we do it to one another. Until we’re together don’t expect our lives to matter to anyone else.”

Jefferson County Commissioner Sheila Tyson was close to Wright. Her eyes welled with tears throughout the event. “I’m tired of crying,” she told me. “If your foot’s on my neck, I don’t care what color you are, I want it off. We need to stop this Black-on-Black crime. Civilized people don’t do this to each other.”

Birmingham Police Chief Patrick Smith sees a “recent uptick” in the number of homicides committed with assault weapons, a major reason unintended targets are often struck by stray bullets. He, like many other public officials, is frustrated by the nonsnitch cultures that permeate our community. Smith says despite a $25,000 reward, investigators “still struggle for leads” in the murder of 2-year-old Major Turner almost a year ago when he was struck by one of eight to 10 bullets fired outside his family’s first-floor apartment in Kimbrough while lying on the couch with his mother after dinner.

“Black Lives Matter is heartbreaking to me,” he says. “We have a great slogan for everyone to stand behind, but it has to matter every day. It can’t just matter when it’s [a police shooting]. We have to have a conversation with ourselves about how much it matters to us.”

There are no easy, simple, or quick solutions, sadly. The myriad conditions that sank us to these depths did not manifest in an inkling and they will take years to undo. But solutions must be sought and they begin with us. In our homes.

“The person who shot [Yasmine] didn’t start [shooting] that day,” said Tyson. “It started when they were a little child. It had something to do with the way they were raised; I feel it in my soul. If you’re not going to take care of your babies and raise them right, don’t have none.”

Adds Smith: “It feels like Dr. King and others died for our right to kill each other.”

This, this hard and heinous truth, we must truly overcome. Not someday. On this day, and beyond.

White people owe black individuals absolutely nothing. We sacrificed our civilization to the belief people should be judged by character and not the color of their skin.

Our ancestors knew better. They dedicated their lives, fortune and sacred honor to their posterity, not the dream of Martin Luther King, Jr.