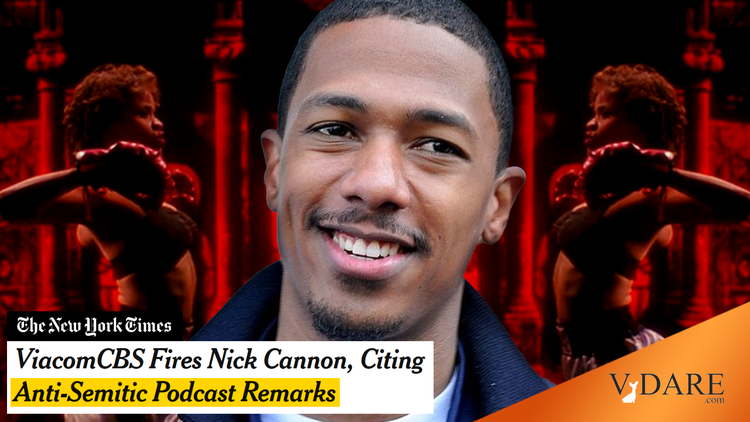 Black Celebrity Says Caucasians Lack the Melanin to be Compassionate, Gets Cancelled (But Not for That)

As I’ve been mentioning for a while, the last two Black Power moments (late 1960s, early 1990s) got cancelled over black anti-Semitism.

For example, the rap group Public Enemy and the director Spike Lee were praised in the late 1980s when it was assumed by white elites that their phrase “Fight the Power” referred to fighting merely whites in general, especially working class whites like the NYPD:

But in the 1990s it became clear that both felt that Jews tended to be particularly powerful whites, especially in the entertainment industry, so the Public Enemy-Spike Lee-NWA-Minister Farrakhan era got shut down for getting uppity toward Jews.

It will be interesting to see how this plays out this time.

Here’s an amusing new dialog between Professor Griff of Public Enemy and a somewhat younger black celebrity Nick Cannon, who was married to Mariah Carey and is more of a mainstream TV star than a black-only name: e.g., he’s a singing contest judge, that sort of thing. Nick echoes the 1990s views of professor Leonard Jeffries about Ice People vs. Sun People that John Derbyshire has always found rather evocative:

Nick Cannon: (00:01)
Let’s go to what it really is, then. When we talk about the power of melanated people, when we talk about who we really are as gods, and in understanding that our melanin is so power and it connects us in a way that the reason why they fear black, the reason why they fear is because they… The lack that they have of it. So then when you see what’s… Dr. Frances C. Welsing talked about, is that fear and that-

Nick Cannon: (00:26)
That deficiency of when you’d have a person that has the lack of pigment, the lack of melanin, that they know that they will be annihilated, so therefore, however they got the power, they have the lack of compassion. Melanin comes with compassion. Melanin comes with soul that we call it, we call it soul. We soul brothers and sisters. That’s the melanin that connects us, so the people that don’t have it are… And I’m going to say this carefully, are a little less and where the term actually comes from, because I’m bringing it all the way back around to Minister Farrakhan to where they may not have the compassion or the… When they were sent to the mountains of Caucasus, when they didn’t have the power of the sun, that the sun then started to deteriorate them. So then they’re acting out of fear. They’re acting out of low self esteem, they’re acting out of a deficiency. So therefore, the only way that they can act is evil. The only way they can… They have to rob, steal, rape, kill, and fight-

Nick Cannon: (01:40)
So then these people who didn’t have what we had. And when I say we, I speak of the melanated people, they had to be savages. They had to be barbaric. They had, because they’re in these Nordic mountains, they’re in these rough torrential environments so they’re acting as animals. So they’re the ones that are actually closer to animals. They’re the ones that are actually the true savages and then they built up such this, I don’t want to say warrior, but they built up such this conquering barbaric mentality.

Cannon has now been cancelled, but not for that part about whites. From the New York Times news desk:

The television star Nick Cannon was fired by ViacomCBS on Tuesday for making anti-Semitic remarks during a recent podcast in which he discussed conspiracy theories about Jewish people and praised a minister notorious for anti-Jewish comments.

ViacomCBS is the parent company of MTV and the cable channel TeenNick, both of which prominently showcased Mr. Cannon for years on various platforms. …

A ViacomCBS spokeswoman said in a statement that the company categorically denounced all forms of anti-Semitism.

“We have spoken with Nick Cannon about an episode of his podcast ‘Cannon’s Class’ on YouTube, which promoted hateful speech and spread anti-Semitic conspiracy theories,” the statement said. “While we support ongoing education and dialogue in the fight against bigotry, we are deeply troubled that Nick has failed to acknowledge or apologize for perpetuating anti-Semitism, and we are terminating our relationship with him.”

Mr. Cannon’s dismissal by ViacomCBS came after the star wide receiver DeSean Jackson was fined and disciplined by the Philadelphia Eagles last week for sharing an anti-Semitic quotation attributed to Hitler.

On the June 30 episode of the podcast, Mr. Cannon was interviewing the rapper Richard Griffin, known as Professor Griff, about his dismissal from the hip-hop group Public Enemy in 1989.

Mr. Griffin left the group after he said in an interview with The Washington Times: “The Jews are wicked. And we can prove this.” He also said that Jews were responsible for “the majority of wickedness that goes on across the globe.”

Speaking to Mr. Cannon, Mr. Griffin doubled down on his past remarks about the influence of Jewish people on the music and media industries.

Mr. Cannon said it was an honor to have the “legend” Mr. Griffin on his podcast. He also said it was a shame that Louis Farrakhan, a minister known for his history of anti-Semitic comments, had been silenced on Facebook.

Responding to Mr. Griffin’s contention that six dominant media companies were controlled by Jewish people, Mr. Cannon said it was comparable to the power of the Rothschilds, the banking scions who are a focus of anti-Semitic conspiracy theories.

“I find myself wanting to debate this idea and it gets real wishy and washy and unclear for me when we give so much power to the ‘theys,’ and ‘theys’ then turn into illuminati, the Zionists, the Rothchilds,” Mr. Cannon said later in the podcast.

“You can’t be anti-Semitic when we are the Semitic people,” Mr. Cannon said. “That’s our birthright. So if that’s truly our birthright, there’s no hate involved.”

Just remember, anti-Semitism is a THING. Anti-whiteism or anti-gentilism … are we even sure how the spell those words?