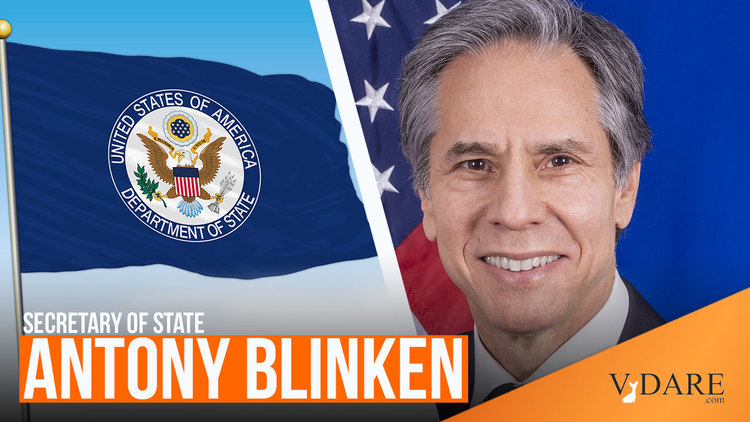 Why not just make it illegal for the public sector to hire or promote white people? Isn’t this the only way to TRULY combat white privilege and systemic racism?

Because now we learn the U.S. State Department is just too white, painfully staffed with insufficient amounts of People of Color.

Blinken’s State Department is racing to address a 232-year-old problem: the department’s overwhelming and entrenched whiteness, Ryan Heath reports. The new Secretary is creating a departmental Chief Diversity and Inclusion Officer, and appointing a Deputy Assistant Secretary in every departmental bureau to take charge of diversity, equity and inclusion issues. He’s also talked to HBCU students and met with staff groups to hear firsthand about their experiences

The new team is also leading by example: public facing senior staff include spokesperson Ned Price, who is openly gay, and his deputy Jalina Porter. The first confirmed ambassador is Linda-Thomas Greenfield. But pressures are building between State’s culture of conformity, America’s race reckoning, changed expectations after #MeToo, and the demands of younger staff.

Amb. Melanne Verveer and Amb. Bonnie Jenkins, President Biden’s nominee to lead arms control efforts, are among those who would like a big round of mid-career hires to help rebalance the numbers. Irvin Hicks Jr. — like his father, a senior Black U.S. diplomat — said their combined 60 years experience at State has taught him that “the more things change, the more they stay the same.” His current biggest fear is retention, or the lack thereof: highly educated young diplomats of color have other good options, and seem inclined to take them.

Diplomats of color suggested that getting ahead at State was like “cracking a secret code” to the old white-boys club. One possible solution: formal mentorship or “sponsorship”which would give new recruits advocates in the State system.

Maryum Saifee, a career diplomat, says that new recruits are hard-wired to keep their heads down, making it harder to deal with inappropriate behavior. Former diplomats told POLITICO the situation will not change without a new set of incentives for managers, and protections for staff who speak out. “The department needs to welcome and reward dissent,” said Wes Reisser, a deputy director in the department’s Bureau of International Organizations.

How has America thrived and survived with such low levels of melanin in the State Department?

As Steve Sailer has noted, equate to a fitting acronym for what the establishment/elite hope happens to whitey: D.I.E.

Entrenched whiteness must be overcome, by any means necessary!