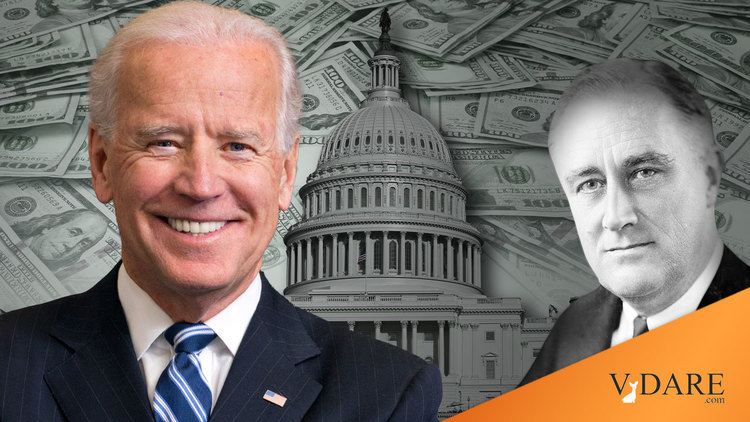 Biden Seeks to Use Infrastructure Plan to Address Racial Inequities

The president’s $2 trillion proposal allocates money to help communities of color, like a New Orleans neighborhood devastated by a highway project a half-century ago.

It was so devastated that nobody has managed to adjust in 50 years.

I live a few blocks from a giant freeway. I should get some Biden Bux for the devastation.

Seriously, the big devastation to the neighborhood due to the freeway only happened recently when Mayor Garcetti decided to let bums live on the sidewalks under the underpass. The freeway opened in 1955, but this is the first time pedestrians have been blocked. Heck, it doesn’t rain 350 days of the year in L.A. lately, so it’s not like the homeless desperately need to be shielded from the rain. Many of them have moved to L.A. to enjoy the year-round sunshine and now the government is telling them to occupy chokepoints under freeways. And have you noticed how much stuff the homeless own these days? Their possessions fill both sidewalks of the underpass, so now no law-abiding pedestrian can walk from one side of the freeway to the other without risking getting run over by cars driving 45 mph.

WASHINGTON — America’s most celebrated infrastructure initiative, the interstate highway system, rammed an elevated freeway through the center of Claiborne Avenue in New Orleans in the late 1960s.

It claimed dozens of Black-owned businesses, along with oak trees and azalea bushes that had shaded Black children playing in the large neutral ground in the middle of the street, eviscerating a vibrant neighborhood whose residents fought in vain to stop the construction.

And that’s why the murder rate is high in this one black neighborhood: this highway was constructed 50 years ago. We know that for sure because, in contrast, every other black neighborhood in New Orleans is Bedford Falls.

More than a half-century later, President Biden’s $2 trillion plan to rebuild aging roads, bridges, rail lines and other foundations of the economy comes with a new twist: hundreds of billions of dollars that administration officials say will help reverse long-running racial disparities in how the government builds, repairs and locates a wide range of physical infrastructure.

That includes $20 billion to “reconnect” communities of color to economic opportunity, like the Black residents still living in the interstate’s shadow along Claiborne.

Mr. Biden’s plan, which he unveiled on Wednesday in Pittsburgh, is the first step in a two-part agenda to remake the American economy. The president and his advisers have pitched that agenda — whose total cost could reach $4 trillion — in the grand terms of economic competitiveness and the granular language of shortened commute times.

But they have also stressed its potential to advance racial equity and bridge gaps in economic outcomes.

In addition to dedicated funding for neighborhoods split or splintered by past infrastructure projects, the proposal also includes money for the replacement of lead water pipes that have harmed Black children in cities like Flint, Mich.; the cleanup of environmental hazards that have plagued Hispanic neighborhoods and tribal communities; worker training that would target underserved groups; and funds for home health aides, who are largely women of color. …

The biggest single piece of the plan’s racial equity efforts is not a transportation or environmental project, but a $400 billion investment in in-home care for older and disabled Americans. It would lift the wages of care workers, who are predominantly low-paid, female and not white.

“It’s the first jobs program that is focused primarily on work done by women of color,” said Mary Kay Henry, the president of the Service Employees International Union. “It’s going to transform Black, brown and Asian lives, and entire communities.”

White House officials say the $100 billion the plan allocates to improve and build out broadband internet will disproportionately help Black and Latino families, who have less access to affordable broadband than white families do.

Half of the $40 billion the plan would spend to upgrade research labs across the country would be reserved for colleges and universities that historically serve Black and other students of color.

After all, where has R&D spending had a bigger bang for the buck in terms of boosting the whole economy through technical innovation: Stanford or Howard?

… Administration officials say concerns over racial inequality are an animating force of the infrastructure push. They peppered a 25-page explanation of the jobs plan this week with references to racial equity, and they included two specific examples of the sort of communities they hope to lift with the $20 billion for economic revitalization: the Black neighborhood in Syracuse that was partially bulldozed to make way for Interstate 81

You can tell that the reason the black community in Syracuse is struggling so badly is due to some highway built during the Johnson Administration because the black communities in Rochester, Schenectady, and Buffalo are thriving.

, and the Claiborne Expressway in New Orleans. …

But for some communities of color, those projects devastated existing economies, leveling commercial corridors, cutting Black neighborhoods off from downtowns and accelerating suburbanization trends that exacerbated segregation.

Wait a minute, I thought the problem was that infrastructure was built in black neighborhoods. Now the problem is it wasn’t built. Which is it?

“So if you look at where we need to invest in infrastructure now, a lot of it is concentrated in these communities.”

Past projects were often built in communities that did not have the political capital or resources to successfully protest.

But your expert just said: “A lot of previous government investment in infrastructure purposely excluded these communities.”

“When it comes time to build an interstate through a city, a pattern emerges: The areas that are displaced by that interstate will overwhelmingly be the areas occupied by African-Americans,” Dr. Logan said. Often, he added, lawmakers choose to build “in the places that have the least political power to make sure this doesn’t happen in their neighborhood.”

Freeways really aren’t that wide. The standard lane is 12 feet wide. I live near a 10 lane freeway, and I can walk under it in one minute. Or I could until the Garcetti-ville was erected on the sidewalks, forcing me to walk in the street with cars going by at 45 mph.

Eric Avila, an urban historian at the University of California, Los Angeles, said a consensus during the Dwight D. Eisenhower administration on the need to invest in highways that would connect neighborhoods to cities led to the exclusion of minority communities.

You say exclusion, the Times says inclusion, let’s call the whole thing off.

The federal government also used “urban renewal” or “slum clearance” redevelopment programs that often led to the clearing of the way for giant infrastructure projects like highways.

“These highways were essentially built as conduits for wealth,” Mr. Avila said. “Primarily white wealth, jobs, people, markets. The highways were built to promote the connectivity between suburbs and cities. The people that were left out were urban minorities. African-Americans, immigrants, Latinos.”

Mr. Avila pointed to how plans for the Inner Belt highway in Cambridge, Mass., were halted after protests by faculty members at Harvard and the Massachusetts Institute of Technology.

And in New Orleans, Mr. Avila said, plans for a highway called the Riverfront Expressway were canceled after officials faced pressure from protesters in the French Quarter. But Black protesters were not able to spare Treme, one of the nation’s oldest communities of free Black residents, from the construction of an elevated six-lane stretch of Interstate 10 along Claiborne Avenue.

So, therefore, Joe Biden is going to spend a gazillion Biden Bux in Neighborhoods of Color. Or maybe he’s going to construct a lot of infrastructure in white neighborhoods as racial punishment. To be honest, I’ve lost the thread of the argument.

Amy Stelly is reminded of that freeway each morning when the truck traffic causes her home to shudder. The emissions from the interstate a block away have turned jewelry that she placed near her window jet black.

“Anyone who lives near an urban highway knows what we’re breathing in every day,” said Ms. Stelly, an urban designer and activist against the project. “There’s a layer of silt that sticks on our properties and houses.”

OK, so Biden should not spend a bazillion dollars on infrastructure, right?

It is unclear from Mr. Biden’s plan, and conversations with White House officials, what the administration envisions for Claiborne Avenue. If the funding survives in any bill Mr. Biden might sign into law, those details will matter, said Deborah Archer, a director of the Center on Race, Inequality and the Law at New York University School of Law.

“I think it’s wonderful to be able to say and have the goal that this historic investment will advance racial equity,” Ms. Archer said. “It’s another thing to distribute these funds in a way that has impact.”

In other words, if you read all the way to the end of the article, the NYT reporters want you to realize that this is all BS. But only insurrectionists have Doubts about the policies of the Biden Administration, so the reporters must also have plausible deniability.