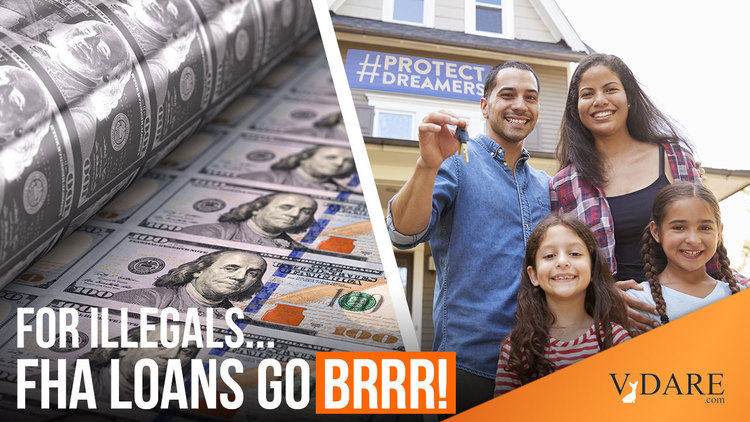 Back even before the Minority Mortgage Meltown of 2007–2010, it seemed crazy to me (I wrote about it as early as 2002) for banks to be lending their money to home buyers who were deportable illegal aliens. Leaving aside the separate question of whether a non-English speaking landscaper or drywaller can afford a home, lending the price of a house to someone deportable seems kind of like lending money to an escaped convict, in terms of risk.

However, for the Federal Housing Authority to guarantee loans to illegals isn't crazy, it's evil. And, of course, presumably illegal.

The thing is, the Federal Housing Authority isn't dispensing its money, it's dispensing your money. And under the Biden Administration, they're giving home loans to so-called "Dreamers"—illegals allegedly brought to the US by criminal parents.

The Trump administration took steps to expel them. Under Biden, they’re eligible for government-backed home loans,

The 28-year-old immigrant from Mexico had been trying for five years to get a loan so he, his wife Gloria and their two youngest children could move into their own home.

Guzman was brought to the United States illegally by his parents but became a legal resident under the Deferred Action for Childhood Arrivals program. Still, even as a so-called “Dreamer,” he didn’t qualify for a loan through the Federal Housing Administration.

“It was disappointing,” Guzman said.

That changed Jan. 19, the day before President Joe Biden took office, when the FHA announced a change in policy extending eligibility to Dreamers who apply for home loans. Guzman and his wife were soon approved.

The sudden shift reflects a contrast in approaches toward immigration by the Biden and Trump administrations.

Trump sought to restrict immigration overall and took steps to eliminate the deferred action program. Dreamers did not qualify for home loans because of how the FHA interpreted a 2003 passage from its Single Family Housing Handbook: “Non-US citizens without lawful residence in the United States are not eligible for FHA-insured mortgages.”

Now, the agency takes a different view of “lawful residency,” saying on its latest forms that the handbook “did not anticipate a situation in which a borrower might not have entered the country legally, but nevertheless be considered lawfully present.”

FHA mortgages, backed by the federal government, make it easier for middle-class and low-income people to buy a home. The government guarantee means banks and financial institutions are more willing to offer FHA loans to families with lower credit scores or smaller down payments — as little as 3.5 percent. [More]

This travesty is partly due to Trump's failure to pull the trigger on eliminating DACA, partly due to the fact that FHA bureaucrats want to give these loans. It's not their money, after all.

And of course, the original villain here is Obama, who started the illegal and unconstitutional DACA program of legalizing illegals that Congress wouldn't grant Amnesty to.

But the people ultimately responsible are cowardly Republicans who wouldn't support immigration enforcement because they think it makes them look bad.