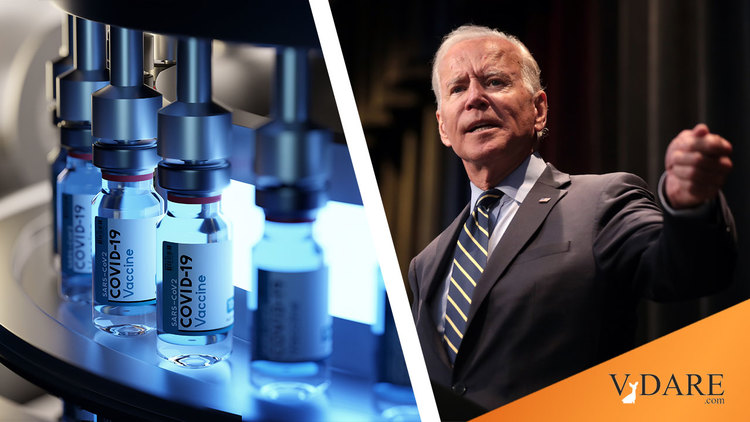 Biden Announces He Has Natural Immunity To The Constitution https://t.co/oKcVGxQ5E3

WASHINGTON (AP) — In his most forceful pandemic actions and words, President Joe Biden on Thursday announced sweeping new federal vaccine requirements affecting as many as 100 million Americans in an all-out effort to increase COVID-19 vaccinations and curb the surging delta variant.

Speaking at the White House, Biden sharply criticized the roughly 80 million Americans who are not yet vaccinated, despite months of availability and incentives.

“We’ve been patient. But our patience is wearing thin, and your refusal has cost all of us,” he said, all but biting off his words. The unvaccinated minority “can cause a lot of damage, and they are.”

The expansive rules mandate that all employers with more than 100 workers require them to be vaccinated or test for the virus weekly, affecting about 80 million Americans. And the roughly 17 million workers at health facilities that receive federal Medicare or Medicaid also will have to be fully vaccinated.

Apparently, the Biden Administration is uninterested in offering reasonable compromises that would suggest it is listening to the vaccine unenthusiastic. Instead, the politics are to propound that there are no reasonable objections to vaccinations. Similarly, the Biden Administration doesn’t want to distract from vaccines by emphasizing simple things you can do, like go outside or lose some weight, or more long shot possibilities like ivermectin or even monoclonal antibodies.

Just two months ago Biden prematurely declared the nation’s “independence” from the virus. Now, despite more than 208 million Americans having at least one dose of the vaccines, the U.S. is seeing about 300% more new COVID-19 infections a day, about two-and-a-half times more hospitalizations, and nearly twice the number of deaths compared to the same time last year.

“We are in the tough stretch and it could last for a while,” Biden said of the current state of the pandemic.

One question is whether the Delta wave is currently already sputtering out. I’ve been following Missouri, where the Delta wave got started about three months ago and new cases are in steady decline. Next door in Arkansas, the second state of the Delta wave, cases have been falling for four weeks now.

Similarly, Louisiana, the 3rd Delta state, is well down from it’s mid-August new case peak, but who knows what’s going on lately with the Labor Day Weekend. Sure, covid is an immense national crisis and all that, but you can’t expect public health officials to work over a three day weekend, now can you. So we’ll have a better sense by Friday of the actual trends rather than of reported numbers jerked around bureaucrats taking time off:

The weather is finally beginning to cool down south so people are less likely to huddle together in the air-conditioned indoors with all the windows shut. Also, how close are we getting to some degree of herd immunity after four waves?

So it would seem as if the Biden Administration is intent on slamming the barn door shut after the Delta horse is gone and announcing victory due to its Strong Steps.

By the way, the single least intrusive and probably most effective non-pharmaceutical intervention would be a campaign encouraging people to Do More Stuff Outdoors and Keep a Window Open Indoors Until Winter Gets Frigid. Sure, the latter would waste energy on A/C and heat which would exacerbate climate change and all that, but still …

Another question is whether there will be an autumn-winter Delta wave in the heavily vaccinated northern states once the weather cools in, say, October and people huddle together indoors more.

A big question is the waning of efficacy of the Pfizer vaccines in protecting recipients against infection and to a lesser extent hospitalization. Israel got a lot of people vaccinated with Pfizer as early as January 2021, and they now appear to have a sizable problem with the vaccines wearing out after about a half year.

Another question is how much the vaccine reduces the spread of Delta. Back during the halcyon days of the classic covid coke era of vaccines in the winter of 2021 before Delta emerged in India, the vaccines seemed to cut the chances of spreading covid considerably. But the Delta version is so infectious that even at full efficacy, that’s no longer as true.

There are basically four reasons for getting vaccinated:

The likelihood of making covid disappear by permanently getting R0 below 1.0 seems implausible with Delta (without a vaccine optimized for Delta, which might happen or might not, or the disease mutating again in who knows what direction). This suggests you’ll likely get infected with covid at some point. The good news is that infection while vaccinated is considerably less likely to be severe. And then you get natural immunity for at least awhile.