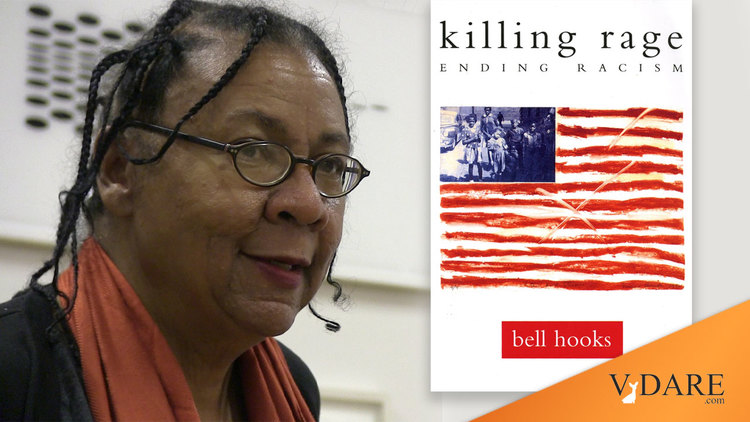 Writer bell hooks, who liked to spell it that way (she was born Gloria Jean Watkins) has died. She was a black feminist intellectual. As such, she hated men, whites, and specifically white males.

hooks specialized in writing on the intersection between race, gender, sexuality and class, publishing dozens of books that explored these themes starting in the 1970s. Her works included “Ain’t I a Woman? Black women and Feminism,” “Feminist Theory: From Margin to Center” and “All About Love: New Visions.”

This is how Apple Books wants us to remember her: 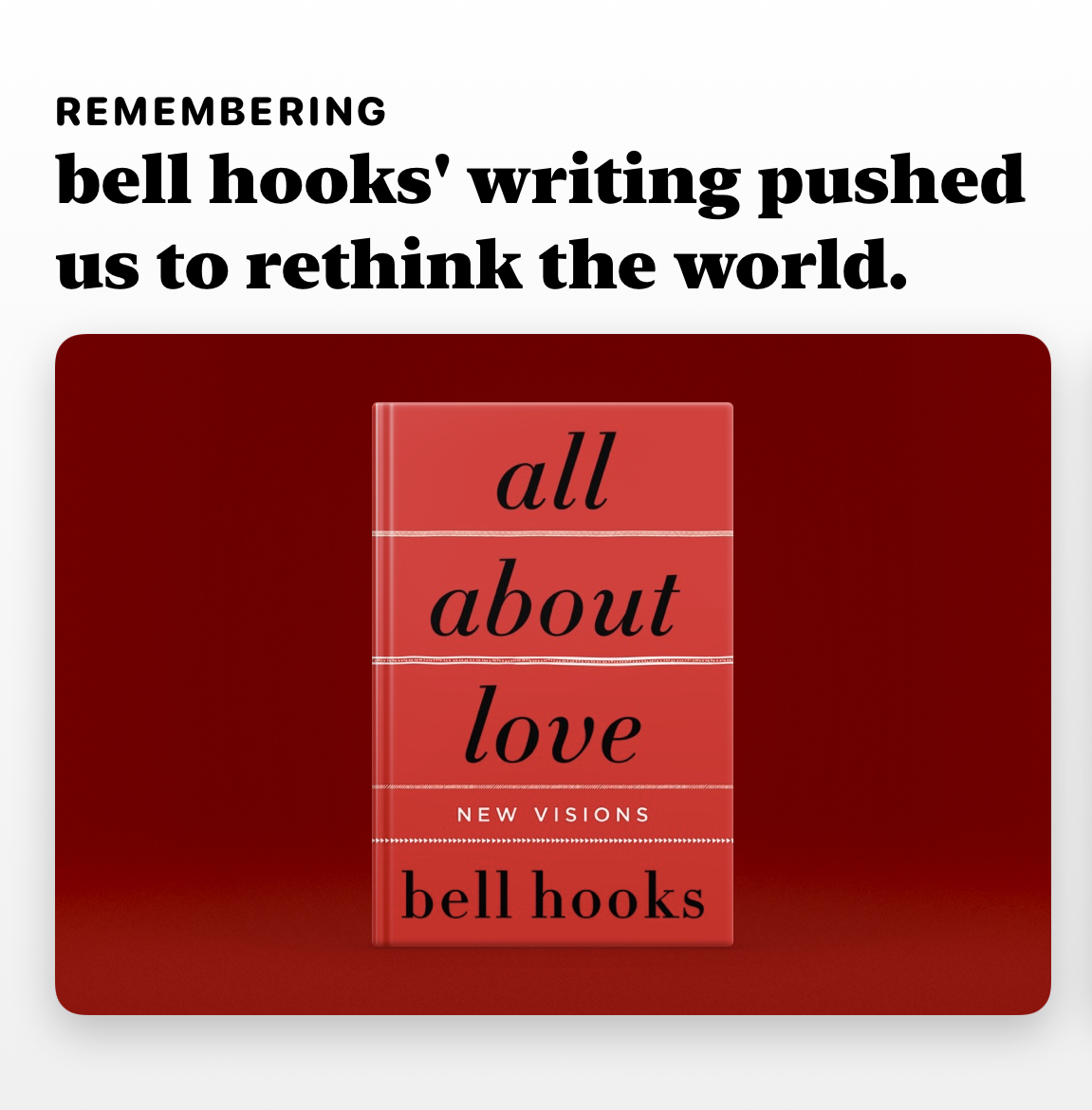 But I remember her from her famous essay Killing Rage, which begins:

I am writing this essay sitting beside an anonymous white male that I long to murder.

Reviewing this in an essay of his own called A Killing Rage, neoconservative FrontPageMag founder David Horowitz wrote:

WHEN I READ THIS SENTENCE, I found myself looking around the room nervously. For these are not the opening words of a new novel by Brett Easton Ellis, but a nonfiction essay by bell hooks, an intellectual icon of the tenured left. Though only in her forties, hooks is a Distinguished Professor of English at the City College of New York, a former faculty member at Yale, and a phenomenon of the politicized academy. An awkward writer of ideological formulas and agitprop prose she has a wide-ranging influence in the politically correct university culture. The collection for which "A Killing Rage" is the title essay is one of a shelf of similar tracts that hooks has published, earning her a sobriquet from the New York Review of Books as "the most prominent exponent of black feminism" in America.

The occasion for professor hooks's homicidal urge turns out to be nothing more than a lost seat on a commercial airline flight. As hooks relates the episode, she had seated herself in the first class cabin alongside a female friend, who is also black and identified only as "K" — perhaps an allusion to Kafka, so cultivated is hooks's sense of victimization. No sooner are the two women settled in their first-class seats, however, then a voice on the plane's speaker system calls K to the front of the cabin where her ticket is inspected. The stewardess informs K that she does not have a claim to the seat because her upgrade has not been properly completed. It is too late, moreover, to correct the fault.

That's from Horowitz's book Hating Whitey And Other Progressive Causes.

More from hooks' hatred for whites:

They do not want to know that the airline has made a mistake. They want only to ensure that the white male who has the appropriate boarding card will have a seat in first class. Realizing our powerlessness to alter the moment we take our seats. K moves to coach. And I take my seat next to the anonymous white man who quickly apologizes to K as she moves her bag from the seat he has comfortably settled in. I stare him down with rage, tell him that I do not want to hear his liberal apologies, his repeated insistence that “it was not his fault.” I am shouting at him that it is not a question of blame, that the mistake was understandable, but the way K was treated was completely unacceptable, that it reflected both racism and sexism.

He let me know in no uncertain terms that he felt his apology was enough, that I should leave him be to sit back and enjoy his flight. In no uncertain terms I let him know that he had an opportunity to not be complicit with the racism and sexism that is so all pervasive in this society (that he knew no white man would have been called on the loudspeaker to come to the front of the plane while another white male took his seat—a fact that he never disputed). Yelling at him I said, “It was not a question of your giving up the seat, it was an occasion for you to intervene in the harassment of a black woman and you chose your own comfort and tried to deflect away from your complicity in that choice by offering an insincere, face-saving apology.”

If hooks actually wrote that on the plane and the white male she was harassing saw it, she might have been removed from the plane and banned from flying. And if she were a white male and wrote something like that about a female affirmative action case who tried to take his first class seat with a dodgy upgrade, he would have been immediately fired, to the tune of national headlnes. (She was mentioned in our 2008 article Why Do Only Whites Lose Jobs Over Racial Remarks?)

hooks was an instance of the "Everyone Thinks They're Rosa Parks" syndrome—she was a college professor sitting up front in the first class section of the airplane, who was complaining that she couldn't have a friend who didn't have a valid ticket sit up front with her.

Then she blamed the white guy with a valid ticket whose seat she was trying to take, the white airline employees, and a cabbie who didn't want to drive to the airport, and whom she threatened to report to the Taxicab Commission...but whose race she didn't mention.

Once you believe everyone around you is a racist, then you think everything bad that's happened is because of racism.

Well, now she's at peace, where what Jonathan Swift called "savage indignation" can no longer lacerate her heart.

There's still Brittney Cooper, though, to carry on.