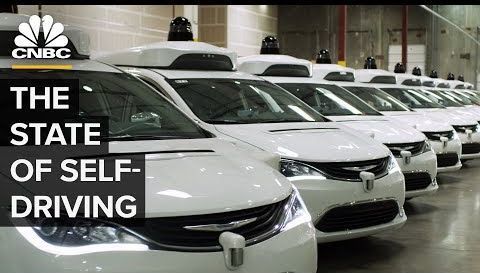 Automation: Self-Driving Cars Still Are Not Ready for Prime Time

Tech nerds may remember back to 2012 when the billionaire founder of Google predicted that self-driving cars would be a thing very soon: (Cnet: Google’s Sergey Brin: You’ll ride in robot cars within 5 years).

But it hasn’t happened, not even close. Maybe the brainiacs of Silicon Valley couldn’t anticipate the vagaries of normal street chaos and snow drifts in diverse climates.

Below, a lot of early testing occurred in sunny suburbs south of San Francisco where 25 mph was the maximum speed of the Google car shown below. 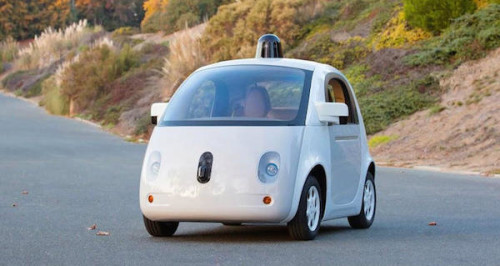 The slow development is not a bad thing at all. Although self-driving cars would be a help to people with restricted movement, the job loss would be catastrophic. Millions of Americans work as drivers, as shown in the 2015 graph below: 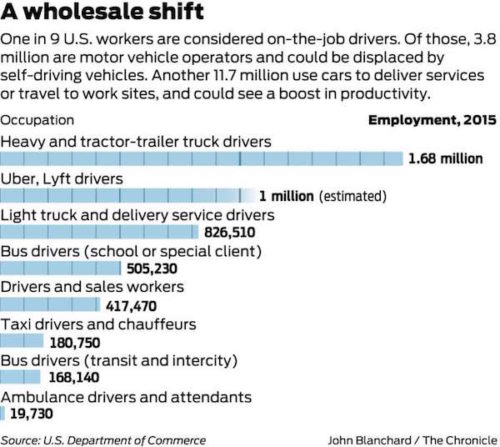 As has been pointed out here numerous times, the automation of many industries means America needs vastly fewer immigrants to do low-skilled jobs. In numerous areas of work — those that are less fraught with issues of human safety — robots and automation are going gang-busters, and the country should recognize a near future of fewer jobs overall and adjust immigration accordingly — to zero. But in contrast to trends elsewhere, the self-driving issue being postponed indefinitely benefits foreign drivers along with Americans, so immigrant cabbies are safe for now.

In the current article from CNBC, there’s no assurance of self-driving progress. The failures in safety (like the 2018 crash of an Uber car that killed a woman in Arizona) have not been solved, so the basic promise of totally safe automotive travel has not been fulfilled. More surprising is that the technologists seem unsure of when the real deal will be here — the magic day keeps being postponed years into the future.

Self-driving cars were supposed to be here already — here’s why they aren’t and when they should arrive, CNBC, November 30, 2019

More companies are trying to bring self-driving cars to the masses than ever before. Yet a truly autonomous vehicle still doesn’t exist. And it’s not clear if, or when, our driverless future will arrive.

In a third-quarter earnings call, Musk said Tesla “appears to be on track for at least an early access release of a fully functional Full Self-Driving by the end of this year.” Other leaders in the field are taking a more sober view on driverless cars, what’s still needed to perfect them and how long before they are part of our daily lives.

Avideh Zakhor, a professor at the University of California at Berkeley’s electrical engineering and computer sciences department, explained what inspired the rational reckoning in the industry:

“There was a sense maybe a year or two ago, that ‘Oh, our algorithms are so good! We’re ready to launch. We’re gonna launch driverless cars any minute.’ And then obviously there’s been the setbacks of people getting killed or accidents happening, and now we’re a lot more cautious.”

States don’t have clear regulations governing the safety testing and deployment of driverless cars, and that’s one challenge to getting them out on the road.

As of October, 41 states have either enacted legislation or signed executive orders regulating the testing and use of autonomous vehicles. In September, the National Highway Traffic Safety Administration released new federal guidelines for automated driving systems — but they’re only voluntary at this point.

Miles driven by test vehicles on real roads had been a frequently touted metric. But to advance the safety of their driverless systems, big players including GM-owned Cruise and Amazon-backed Aurora have also developed their own means of testing in simulation, much like rocket and airplane makers would before a first test flight. (Continues)