It was the biggest police operation in Australian history — more than 800 law enforcement officers raided over a dozen sites across Sydney suburbs to arrest Muslims planning a horrific act of Islamic terror. The objective of jihadists was to snatch a random citizen and murder that person by beheading as a subject for a Youtube video.

ISIS-style Mohammeds like the publicity they get from beheading and the head removals of the two American journalists were therefore a big success.

Plus, their holy book commands the faithful to behead: “When you meet the unbelievers, strike the necks…” (Koran 47:4). They appear to enjoy the bloodthirsty murder: a recent video shows a cleric instructing would-be choppers to “take the sword, you place the head like this and then you enjoy yourself with it.”

Remember, this is the “Religion of Peace” and if you don’t agree then you’re a filthy racist Islamophobe.

Here’s Robert Spencer explaining the Australian situation, that ISIS is there and intended to act. (Too bad he couldn’t mention how so many Muslims [half a million] got there, namely through the immigration door.)

Another aspect of Muslim hostility, as Spencer notes, were the protests — not against the brutal planned attacks — but against the police raids arresting the terrorists.

Hundreds protest in Sydney about counter-terrorism raids, The Guardian, September 18, 2014

Over 200 people in western Sydney attended a protest about the pre-dawn counter-terrorism raids that occurred across the country.

Rally organisers took to Facebook to encourage people to join them at a rally at Lakemba station to oppose the treatment of the Muslim community in what have been touted as the largest ever counter-terrorism raids in Australian history. [. . .]

Below, Sydney Muslims protest against the police for breaking up a terror plot. 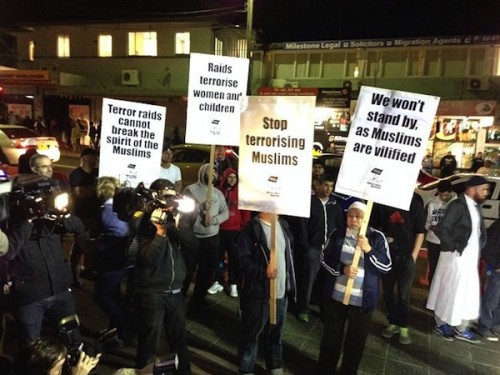 And not to forget Backlash… No Australian has burned down a mosque or lynched a Muslim, but unfounded fears of a backlash from citizens are propagandized by Islamics into a kind of intimidation.

DURING prayers at Lakemba Mosque, the tension has been palpable.

There, and in Auburn, in Bankstown, in Liverpool, and in Greenacre, the situation is the same; Sydney’s Muslims are anxious.

They’re shocked by the allegations levelled against one of their own. They’re bracing for a backlash against innocent families. And they’re worried wider Australia will convict all Muslims of guilt by association.

“There is a palpable tension that permeates the environment,” Muslim leader Dr Jamal Rifi said. [. . . ]

Is there a more self-absorbed tribe on earth than Muslims? Their co-religionists were planning to behead an innocent Australian to make a crude statement to advance jihad, but they are concerned only about how the disrupted terrorism will affect them. Muslims residing in Australia want all the benefits of a free society with none of the responsibility.