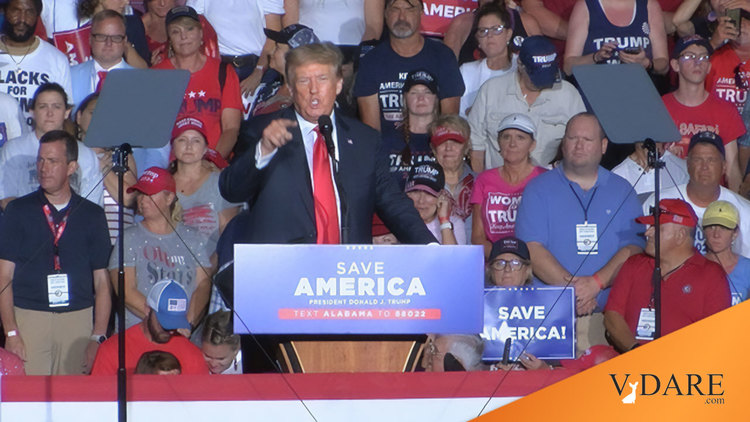 At His Cullman Rally, Trump Was Still Talking About ILLEGAL Immigration Only

Earlier: “The Crown Is In The Gutter”—The Leadership Vacuum On The Patriot Right

The rally Trump did in Cullman, AL ten days ago  is in the news because of increased Covid in the area, and Cullman County being not very heavily vaccinated.

This is ordinary double-standard stuff—no BLM riot was ever considered a superspreader, and while Cullman County is very white, some of the most unvaccinated groups in America are black.

But what you really need to know is that though Trump ran on not only stopping illegal immigration, but lowering legal immigration (see Trump Posts Immigration Plan, Neocons Go A Little Crazy  August 16, 2015), and actually succeeded in lowering it somewhat,  his rally speeches continue to focus only on what he did—and what Biden is trying to undo—about illegal immigration.

In a matter of mere months, Biden has thrown our Southern Border Wide open. When I left office, we handed the new administration the most secure border in US history. And they turned it into the greatest border disaster in American history, probably anywhere in the world. You know, they're emptying their prisons out into our country.

And I'm not just talking about Guatemala, Honduras, El Salvador, Mexico. I'm talking about Middle Eastern countries, Yemen, people are coming in from Yemen, the country will really be in trouble.

Under my administration, we ended the ridiculous Catch And Release. You catch somebody. You find out they're a criminal and you release them immediately into our country. We ended asylum fraud, we deported record numbers of criminal aliens. We negotiated historic agreements with Mexico and Central America to stop illegal immigration.

I mean, they used to stay in the United States, and then you'd never find them again, you say and you know, some of these people are seriously tough criminals. I achieved a 90% reduction in illegal border crossings. Think of that 90%—it was gonna go much higher—and brought illegal immigration to a virtual halt. It was the lowest levels ever recorded. And you could come into our country, but you had to come in legally. Finally, we did it. But we had to win a lot of court cases. Many of those court cases started against us by Democrats in Congress.

Under the Trump administration, our message was clear. If you try to come here illegally, you will be caught, you will be detained. And you will be immediately sent back home where you belong. And when people heard that, and they hear it, they're“Genius, it's genius.”

When people heard that, and then they saw the results because there it was happening. They never came. They stopped—remember the beginning with the caravans. We ended the caravans, but now the caravans are back at a level that nobody's ever seen, bigger, stronger, more powerful to disgrace now the radical left Democrats have surrendered our sovereignty to the coyotes and drug cartels, child smugglers, human traffickers and they usually traffic in women.

Biden stopped wall construction, instituted nationwide Catch And Release, wanted it back and invited the entire world to make a mad dash for the USA when he said “Come, you're welcome.” I don't know if he knew this. He had to think this is a good thing.

What happened? They're destroying our country. They're destroying last month alone Border Patrol, who we love apprehended a mind boggling 210,000 illegal border crossers, you can multiply that times 6,7, 8, or 9 of the people that come in without getting caught. They say you can use numbers like that. record numbers are getting away and historic numbers are coming from outside Mexico and Central America, from every corner all over the world, a lot of them coming in from the Middle East. At this rate, millions of illegal aliens will cross our border just this year alone, millions, millions of people. Many of these people are hardened criminals, murderers..

As James Kirkpatrick wrote earlier, the actual immigration issue is still available to anyone who wants to pick it up.