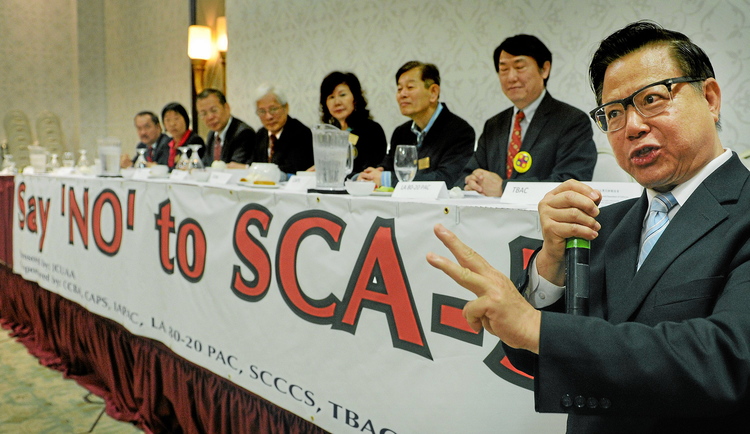 Asians And 209: White "Backlash" Would Be Covered Differently

The picture above is from an indignation meeting of Asian activists, mostly parents, to fight a revival of affirmative action and the repeal of Proposition 209. Asians rally against SCA 5, call it revival of Affirmative Action, By Zen Vuong, Pasadena Star News, March 8, 2014. I got that from Brenda's post on the subject, in which she said

What’s interesting is that Chinese Californians are beginning to understand how much they have benefited from Prop 209, under which their studious young folks are no longer bumped out of contention for top college slots by unqualified (but diverse!) Hispanics and blacks. As a result, a “groundswell of Asian American opposition” is forming up against the legislation to reinstate affirmative action (according to uber-lib Daily Kos)

White politicians would have to come up with some principled argument framed in Kantian terms for why legislation intended to hurt white children is bad for everybody. Asians can't be bothered.

This is true, in a note introducing Peter Brimelow's old Forbes piece Spiral Of Silence (a review of Frederick Lynch's Invisible Victims: White Males and the Crisis of Affirmative Action) we wrote

Mickey Kaus writes at the Daily Caller that

If you’re looking for moments when tectonic issue shifts seem to become visible–like the moment when Dems realized they had to give up on gun control, or the (coming) moment when there are enough charter school parents to defeat teachers’ unions–here’s one:  the moment when California Democrats abandon a push to reinstate race preferences because of constituent-driven opposition from Asian Americans in their own ranks. … Background: California passed Ward Connerly’s Prop. 209 in 1996, which banned race preferences in admission at public colleges like the University of California.  This latest push is an attempt by the state’s Democrats to advance a constitutional amendment that would undo this aspect of 209. …

Meanwhile, the state’s Asians, who have done fine in the admissions game without preferences, now constitute about 11 percent of the electorate–bigger than the state’s black vote, though still smaller than the Latino share  (which was 22% in the 2012 exit poll). Asian communities seem to worry, not without reason, that preference-aided admissions for blacks and Latinos will mean fewer slots for Asians. …

All of this is very interesting, but I can't help noting that if this were white backlash by white parents worried about their kids, it would be treated a lot differently. You could ask Jared Taylor about that.