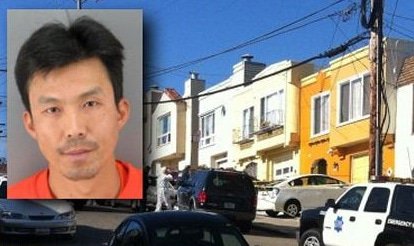 Arrest Made In Suspected Immigrant Mass Murder In San Francisco

An arrest has been made in the quintuple killing at 16 Howth St. in San Francisco which I wrote about last night. It's unclear whether the victims, all Asian, or the suspect, ditto, are immigrants and thus whether this is technically an example of Immigrant Mass Murder Syndrome. But Binh Thai Luc is a Vietnamese name—he's described as a "San Francisco resident."

The San Francisco Police announced Sunday evening that a suspect had been arrested that morning in connection to the brutal murders of five local residents, who were found dead days before in a scene described as among the worst officers had ever seen.

In a 5 p.m. press conference, Police Chief Greg Suhr announced that 35-year-old San Francisco resident Binh Thai Luc had been arrested that morning and booked on five counts of murder.

The announcement came just two days after the victims were found dead by a close relative inside their home at 16 Howth St., near the City College of San Francisco at 7:47 a.m. Friday morning.

There was bleach and paint all over the home, as if someone was trying to disturb the scene, police had said earlier.[More]