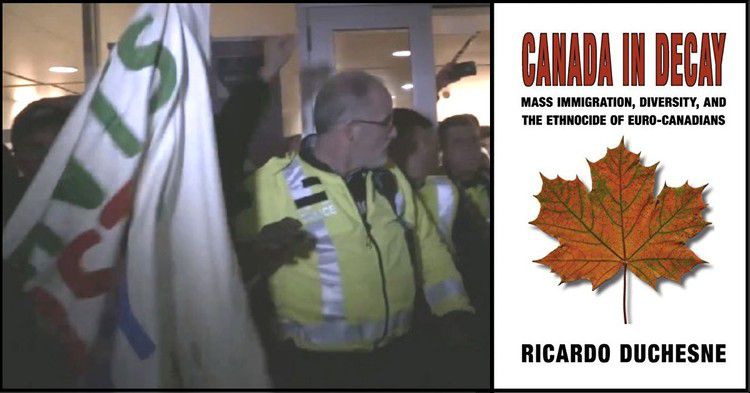 Antifa Attack On Ricardo Duchesne In Canada: "The Barbarians Are At The Gates" 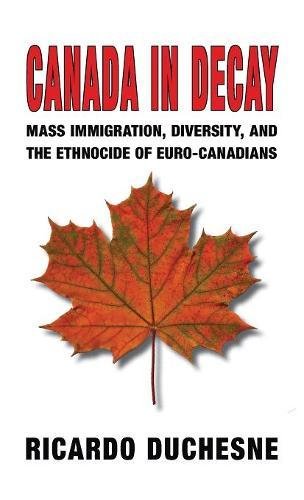 icardo Duchesne is a Canadian who is considered dissident because he likes Canada, Canadian society, and Western Civilization in general.  In the past this was more or less required for Canadian university professors, but in the Current Year, you get this: UNB prof accused of being a white supremacist takes early retirement, CBC News, June 4, 2019.

Duchesne having retired to become an independent scholar, he had a speaking engagement at the University of British Columbia, along with another Canadian academic,  Mark Hecht, whose op-ed questioning diversity had been published and un-published immediately afterwards by a Canadian MSM outlet.

This led to yet another Antifa riot, presented very mildly by the Canadian MSM. The two stories below are from the Canadian Broadcasting Company,  a government agency, and the local college paper.

You get a quite different picture of this from ImmigrationWatchCanada, below:

The Barbarians Are At The Gates
Posted on October 13, 2019

The Barbarians Are At The Gates

Free speech is under assault from fascist “anti-fascists”

You don’t fully comprehend the enormity and critical importance of the immigration issue in Canada until you have walked through an “Antifa” gauntlet, felt their shoving, heard their deafening and robotic chants and smelled the human feces they have left behind. If you don’t believe me, just ask the almost one hundred law-abiding, peaceful people who paid for a ticket to listen to a presentation at UBC on Wednesday evening, October 9. The talk was given by former UNB professor Ricardo Duchesne and Mount Royal University Professor Mark Hecht. In case you didn’t know, “Antifa” is short for “anti-fascists”, which is what these hooligans fancy themselves as. It has to be the most inaccurate name of the century.

Antifa followed their standard plan. They arrived early so some 20 to 30 of them could be in place to block the entrance to the building where the talk was to occur. The ones blocking the door were all males. They dutifully conformed to the Antifa dress code : All wore black masks over their faces. Only their eyes were exposed. Two unmasked female Antifa protestors stood at another location. All were loudly chanting "Fuck off Nazi scum." Their chants could be heard blocks away. All the males locked arms to prevent anyone from getting through the building's front door and into the room where the two professors were to speak. Some UBC Security personnel did try to escort people through the Antifa mob. However, the Antifa mob pushed and shoved as much as they could to delay or block anyone who wanted to enter the building.

In so doing, they succeeded in intimidating many of the women ticket holders. An undetermined number left in fear.

The door into the building led to a corridor which had doors into the lecture room where the talk was to occur. A number of windows are on both sides of the doors. The Antifa mob stood in front of the windows and pounded on them for close to two hours in an attempt to drown out the voices of the two professors addressing the group. Luckily, the sound of the pounding was muffled sufficiently to allow the two professors to speak and be heard. As Professor Hecht began his speech to the backdrop of pounding, he made an apt comment: "The barbarians are at the gates." Indeed.

Just before that comment, Hecht had smelled the stench of (most probably) human feces that one of these righteous barbarians had no doubt planted. The smell was particularly strong for those who had unfortunately chosen seats that were closest to it. The feces could well serve as a symbol for the fascist methods of this “anti-fascist” movement.

(1) Is it illegal to wear face masks at such events? Was Antifa's obstruction illegal? If the answer to both is yes, then the full weight of the law should descend on Antifa heads. UBC buildings and land are public property. Yet Antifa acted as if it owned the property and had the right to stop anyone from entering it.

(2) Why were the RCMP and UBC Security so unprepared and unable to bring in enough re-inforcements? Antifa has acquired a solid and universal reputation for thuggery. Quite likely, Antifa was inspired by Canada's so-called "Anti-Hate Network” (CAHN), a recently-minted clone of the corrupt US Southern Poverty Law Center. That U.S. group provided CAHN with start-up funding. CAHN its CEO and its UBC imitator must be investigated. Tolerance of Antifa's outrageous conduct only whets Antifa's appetite for more.

(3) What should UBC do now? UBC administrators have to make it clear that obstruction of events like that of Wednesday, October 9 are not to be tolerated. That means that arrests have to be made when shameless obstruction happens. It does not mean that UBC should ban future talks. So-called "hate speech" needs a complete re-think. The answer to Antifa's obstruction of free speech is more speech. Professor Duchesne and Professor Hecht have important contributions to make to Canadian society. Antifa bullies do not.

(4) Who else has to be held to account? Here are some starters : Canada's education system; its cowardly and quisling political class; and many of its institutions such as its disgracefully-biased and quisling CBC and much of our mainstream media. These groups are lighter versions of Antifa, but they are still Antifa. All have cultivated and encouraged other versions of Antifa. All are in serious decay.

For more insight into the thoughts of Professors Duchesne and Hecht see :