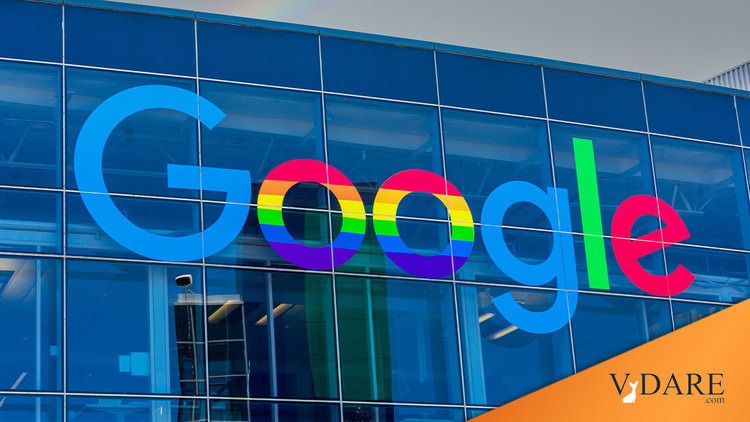 A wise man once wrote that "egalitarianism is a revolt against nature."

Democrats now wish to push anti-white equity audits upon tech companies, because they dare employ too few non-whites (and non-Asians) amidst those on payroll. You’d think this would be a statement about who is creating technological innovation amongst software companies, when a dearth of blacks and Hispanic employees are responsible for anything resembling pushing mankind into the future, but the opposite is in play.

Democrats want to subject tech companies to mandatory “racial equity audits” conducted by their political allies, a move which could cement the party’s control of Silicon Valley.

A small group of organizations with close ties to Democratic politicians and progressive donors conducts the majority of these audits, which advocates say are needed to promote racial justice. But in practice, equity auditors often push companies to hire more left-wing activists and former Democratic party officials, often from the auditing organizations themselves. The audits also call for the abolition of standards of “merit” and the ability for a special executive to veto any company project.

Racial equity audits are the chief service offered by “diversity, equity, and inclusion” consultants, a cottage industry connected by a revolving door of Democratic staffers and funded by liberal donors. Equity auditors have made a killing from school districts that pay handsomely for consultants to revamp curricula, the Washington Free Beacon has reported. Now, racial equity auditors are setting their sights on corporate America.

Democratic officials have called for audits of major companies. One proposal from House Democrats would fine companies $20,000 a day for not completing biennial, independent “racial equity audits.” In June, five Democratic senators called on Google parent company Alphabet to conduct an audit. The Democratic letter cited Color of Change, a left-wing nonprofit pushing for audits.

In that hearing, Sen. Cory Booker (D., N.J.) said Alphabet should “work with civil rights groups who have developed a framework to guide tech companies on how to conduct racial equity audits.”

Booker’s call appears to be a veiled reference to Color of Change, which released a “tech framework” explaining how companies should conduct audits. The framework calls for the destruction of an “objective definition of merit” in order to “attract Black talent.” It also requires that every tech company employ an executive with power to veto any product they believe has a disparate effect on black users. Among other powers, the executive should have “hiring and firing power, power over promotions, and power over the flow of people, product, and money.”

Color of Change also calls on tech companies to evaluate every employee in “anti-discrimination accountability systems” in performance reviews. According to Color of Change, tech companies should be required to avoid the use of any dataset that “is the product of real-world prejudice or further perpetuates discrimination,” a vague definition that could be used to shut down almost any machine-learning research.

Beyond “hiring underrepresented groups,” says Color of Change, organizations need to increase the “awareness” of all employees through “comprehensive racial justice trainings and initiatives.” These trainings from outside groups will create “a critical mass of employees that are aware of the origins and effects of white supremacy and anti-Blackness across all vertical and horizontal work streams.”

Color of Change has already succeeded in using racial equity audits to shape big tech policy. In 2018, it successfully pushed Facebook into completing an audit that called for more restrictions on Trump’s posts. Color of Change itself pushed for Trump to be permanently banned from the platform. After the audit was released, Facebook hired an Obama administration Justice Department official to lead the company’s civil rights strategy.

The audits fit within a broader push from Biden administration officials to promote racial justice goals in government policy. The Securities and Exchange Commission is pushing companies to include audit proposals from shareholders in their proxy statements. Federal Trade Commissioner Kelly Slaughter has argued her department has a mandate to tackle “structural and systemic racism.”

Democratic officials and lawmakers have close personal and professional relationships with activist auditors. Laura Murphy, who pioneered corporate racial equity audits, was invited to conduct her first audit in 2016 by Vanita Gupta, a close friend who now serves as associate attorney general.

Before joining the Biden Justice Department, Gupta led the Leadership Conference on Civil and Human Rights, a nonprofit that has called for tech companies to “reduce online activities and disinformation” that harm minority groups. The conference commissioned a report by Murphy on “Key Elements of a Civil Rights Audit.” That report received input from powerful liberal groups, including the ACLU, Color of Change, Human Rights Campaign, NAACP, SEIU, and Voto Latino.

Color of Change is one of the most prominent members of Democracy Alliance, a network largely funded by Democratic megadonor George Soros. It also partners with two other Soros-funded groups, SOC Investment Group and the SEIU, to pressure public companies to comply with audits.

Galt’s Gulch was always a goofy Libertarian dream. When non-whites threaten to use the power of government to call for fines of $20,000 a day on tech companies employing an insufficient amount of non-whites, you know the anti-white narrative is nearing an end.

It just requires enough white people daring to call out the anti-white narrative to stand and assert enough is enough. This day is far closer than most dare admit.

As it is, white individuals breathing is a collective revolt against the current year.