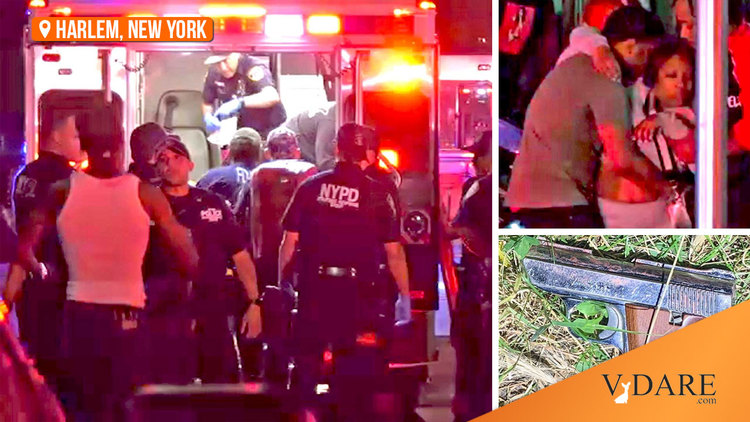 Earlier: What, To The Historic American Nation, Is Your Juneteenth? A Good Day To Stay Indoors And Avoid Gunfire

Police investigating a Harlem mass shooting on Monday morning that left one dead and eight others wounded early are urging the public to come forward with tips to help them find the shooters responsible for the bloodshed. https://t.co/K7JnJeOdLA

Police investigating a Harlem mass shooting on Monday morning that left one dead and eight others wounded early are urging the public to come forward with tips to help them find the shooters responsible for the bloodshed.

Law enforcement officials said the gun violence happened at a gathering in the vicinity of 139th Street and 5th Avenue at about 12:36 a.m. on June 20 — destroying an otherwise peaceful Father’s Day/Juneteenth holiday in the neighborhood.

“The emboldened individuals responsible for this are exactly who our officers are battling every day to make our city safe,” said Police Commissioner Keechant Sewell in an early morning press conference Monday. “And while we are making some headway against violence, we have a lot of work to do, but we need help alongside the entire criminal justice system.”

Officers from the 25th Precinct, in responding to multiple 911 calls about shots fired in the area, found five of the victims on a nearby footpath along the Harlem River Drive. EMS units rushed them to area hospitals.

Police later learned that four other victims wounded in the attack had left the scene, and were brought to local hospitals via private means.

According to WABC-TV, the victims’ ages ranged from 21 to 42. The nature of their injuries varied, with many shot in the torso, while others had taken bullets to their backs, legs and fingers.

One victim did not live to see the sun rise Monday morning. A 21-year-old man wounded in the attack died at Lincoln Hospital of his injuries, police said. The NYPD has not released his identity, pending family notification.

Impulse control (or lack thereof) on display at Juneteenth celebrations in 2022.

It should be noted in 2021 New York City, blacks represent 24.3 percent of population, Hispanics 29.1 percent, and Asians 14.1 percent. Whites are 32.1 percent of the city’s population.

For those homicide suspects arrested, 96.1 percent were black, Hispanic, or Asian in New York City for 2020.

These statistics come courtesy of the 2021 Crime and Enforcement Activity in New York City :

Violent crime has a color/race in New York City, but this datum is inadmissible in the court of public opinion, because it completely obliterates every conceivable egalitarian notion forced upon us by our hostile governing elite. And we heard this truth ring out on 2022 Juneteenth.

How long until our government passes a Federal Hate Crime law about noticing who is committing the gun crime in America’s major cities? Wouldn’t that be in the spirit of Juneteenth?