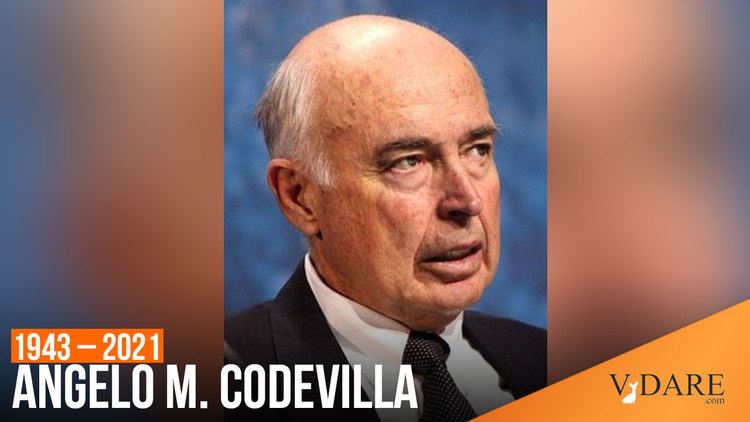 Earlier: Claremont’s Codevilla On The Coming Revolution: “Americans Will Be Nostalgic For Donald Trump’s Moderation.”

Angelo M. Codevilla has just died. He was an American patriot, standing with Trump and other against the elites, but with traces of a curious blind spot on immigration, possibly because he was born in Italy, near Milan, in 1943 and came to America when he was 12, becoming a citizen in 1962.

In 2009, responding to the Sarah Palin phenomenon, he predicted the rise of Trump...or someone like him:

But as the nation celebrates the anniversary of the revolution of 1776, every presidential hopeful should realize that in the next election Sarah Palin — or someone like her — could be the vehicle for another revolution. The distinctions between Republicans and Democrats, liberals and conservatives, are being overshadowed by that between what we might call the “Court party” — made up of the well-connected, the people who feel represented by mainstream politicians who argue over how many trillions should be spent on reforming American society, who see themselves as potters of the great American clay — and the “Country party” — the many more who are tired of being treated as clay.

On October 11, 2016, as election day approached, and elites were going absolutely mental,   Kevin Macdonald quoted Codevilla on the Uniparty:

Codevilla’s basic idea: the cultural revolution of the last 50 years has destroyed America as a constitutional republic. As many on the Alt Right have noted, there is nothing left to conserve. The question now is where our post-republic period will take us. Codevilla writes

Because Republicans largely agree with Democrats that they need not take seriously the founders’ Constitution, today’s American regime is now what Max Weber had called the Tsarist regime on the eve of the Revolution: “fake constitutionalism.” Because such fakery is self-discrediting and removes anyone’s obligation to restrain his passions, it is a harbinger of revolution and of imperial power. [Emphasis added] [After the Republic. Claremont Review, September 27, 2016]

Later, in The Trump Impeachment: A Clash Between America’s Competing Elites?, Macdonald quoted Codevilla again on what we're seeing now:

Were any Democrat to win [in 2020], we can be certain that the demands on us [Deplorables] would escalate, and the government’s choke hold on education, speech, religion, medicine, law, and all manner of administration would tighten further.

Perhaps Codevilla, like Michael Barone, thought at the time that Mexicans were like Italians, and identified immigration restrictionism with anti-Itilian prejudice.  I believe he had learned better by 2021.