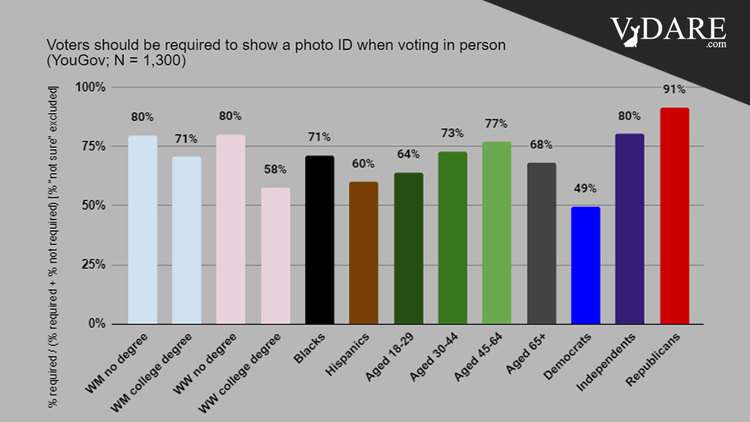 Put voter ID up for a national vote and it will win in a landslide: Joe Biden may say it’s more restrictive than Jim Crow, but almost nobody believes him, including black Americans. Nobody does because it’s obviously not. Everyone knows it’s nearly impossible to function in modern America without photo identification. No bank accounts, no beer or cigarettes, no car rentals, no EBT or social security cards, no mortgage or apartment rentals, no airplane flights, no gun purchases, no prescription medicines, the list goes on and on.

Weaponized wokeism is when those with power oppress those without power in the name of standing up to the powerful in the name of the powerless. It’s a real mindfuck, and our corporate class has it down to a tee.

Coca Cola has a big problem with Georgian politicians enacted laws supported by Georgia’s elected representatives but no problem doing business in non-democratic countries like Saudi Arabia or countries that view minorities as a problem to be solved rather than a vulnerable group whose rights must be protected like China. Delta requires photo ID to board its planes, but that’s different because, well, because Democrats are even better on corporate bailouts than Republicans are!

These aren’t criticisms of Saudi Arabia or China. Let them manage their affairs as they see fit. But Woke Capital is the rot at the center of America’s social structure.