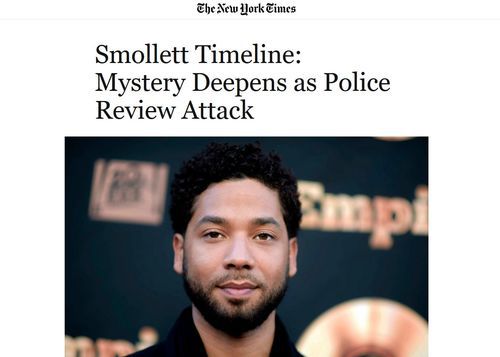 All the Narrative That Fits, We Print! The NYT Buries Smollett Narrative Collapse

On the vast NYTimes.com front page, the only mention of Jussie Smollett is this account from two days ago:

2 Men Detained in Jussie Smollett Case Are Released by Police

The Chicago police said Friday that two men who had been held in connection with the reported attack on Jussie Smollett were no longer considered possible suspects.

The two brothers arrested in connection with the reported attack on the “Empire” star Jussie Smollett were released without being charged on Friday, a police spokesman said. They are no longer considered potential suspects.

“Due to new evidence as a result of today’s interrogations, the individuals questioned by police in the ‘Empire’ case have now been released without charging and detectives have additional investigative work to complete,” Anthony Guglielmi, the Chicago Police Department spokesman, said in a statement.

That announcement was the latest twist in an investigation that started late last month, when Smollett told the authorities that he had been attacked early one morning by two masked men who yelled homophobic and racial slurs at him in downtown Chicago. Smollett also told the police at the time that the assailants had tied a rope around his neck and poured a chemical substance on him.

But the two people who were arrested are acquaintances of Smollett, a lawyer for the men said. At least one had appeared on “Empire,” a fact that had fueled social media speculation that at least parts of Smollett’s story were not true.

The police went from describing the two men as possible suspects for whom there was probable cause to believe they were part of the crime to releasing them, without explanation as to what had changed.

In a brief phone interview late Friday night, Guglielmi said Smollett was still being treated as a victim. Since Smollett reported the attack, the Police Department has said several times publicly that it has no reason to doubt his story.

A representative for Smollett did not immediately respond late Friday to a request for comment on the latest development.

The men were initially detained on Wednesday after arriving on a return flight from Nigeria. Also on Wednesday, the police raided their home and, according to CBS Chicago, removed items like an “Empire” script, a phone and a black face mask hat.

For weeks, the investigators — who have treated the case as a possible hate crime — had few leads. …

All the Narrative that fits, we print!

Last Friday, Mr. Deb of the NYT did not respond warmly to my insinuations that the NYT was letting its readers down gently on this popular hate hoax:

A classic example of how The Times make anti-Narrative news seem more boring to not undermine its readers confidence in the image they have gotten from the Times of how the world workshttps://t.co/7ki8Tw402r pic.twitter.com/MgmKxBGcZv

Update: Just now on Sunday evening, poor Sopan Deb of the New York Times has posted a new story. Let’s check it out!

The actor and singer Jussie Smollett, who says he was attacked by two men last month. The investigation has changed its “trajectory” the police in Chicago said.

The strange case of the “Empire” star Jussie Smollett took another turn this weekend with the police in Chicago saying the investigation’s trajectory had changed amid reports that detectives were reviewing whether the attack Smollett reported late last month had been a hoax.

The H-Word makes an appearance in The Times!

The announcement came after investigators released two men — brothers who know Smollett — without charging them after having identified them as potential suspects on Friday. At least one of them had appeared on “Empire” and Smollett, through his lawyers, has acknowledged hiring one of the men as a personal trainer.

On Sunday, Anthony Guglielmi, the chief spokesman for the Chicago Police Department, reported the developments in a Twitter post. …

On Friday, Smollet’s lawyers issued a strong statement in which the actor rejected any suggestion that he had any role in staging an assault on himself.

The episode has been in the national spotlight for weeks, and even President Trump has weighed in on it. As of Sunday, the police said they were interested in interviewing Smollett again as they sort out what occurred.

Here’s a timeline of how we got here.

Eventually, Deb mentions that the two bodybuilder bros are “of Nigerian descent,” but not that they are black. After all, what does “race,” which does Not Exist, have to do with this story?