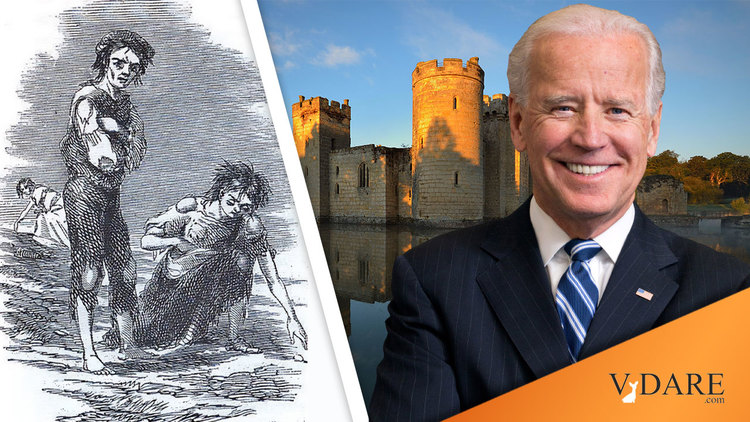 Alienism: Anglo-Saxon Biden Blames His Own Sussex Kinfolk For The Irish Famine

James Kirkpatrick writes here that Joseph Robinette Biden, Jr.  said at a press conference that the

"Biden Rush at the border is just like his great-grandfather getting on a “coffin ship” in Ireland “because of what the Brits were doing.” [Biden Press Confernce Transcript, Rev.com, March 25, 2021]"

That would be his great, or great-great grandfather on his mother's side, one of the Finnegans of County Louth, who entered America sometime between 1840 and 1850.

His Robinette ancestors, however, have been in America since before the American Revolution. English colonist Samuel Robinette was born in Cheshire in 1669, and fathered  Nathan Robinette in 1717.

And as for his Biden ancestors, they come from Sussex, England. Apparently some of his kin were oppressing his other kinfolk.

Both of Joe Biden's parents have Irish ancestry but it was his less well-known English family lineage that intrigued us most....

The Biden family line stretches back to William H. Biden, born in the late 1780s in Sussex, England. The exact location that William Biden hails from has been debated. Some sources indicate that he may have been born in Cambridgeshire, England, as his memorial page on FindAGrave suggests.

William is the first Biden known to immigrate to the United States, where he married Mary Elkins on 13 February 1822.

William Biden died in Maryland in 1849 and is buried at Loudon Park Cemetery in Baltimore.

While America first elected an Irish-Catholic to the Presidency in 1960, when Joe Biden was 18, Biden is the first man of Sussex ancestry to reach the White House. You'd think he'd brag about it more.

A Sussex-based historian has discovered that Joe Biden, president-elect of the United States, has links to the county.

It was only 1917 that Biden's grandfather converted to Catholicism to marry a woman named Robinette in Maryland, and it was only after that the Biden family intermarried with Irish Catholics.

Biden is mostly an Anglo-Saxon, like George W. Bush and Jeff Sessions, but he prefers to identify with the Famine Irish, who he thinks of as being oppressed by the English, because of what we may call the opposite of "nativism," and the opposite of patriotism, too: Alienism.

As Joe Sobran pointed out many years ago, American political language

"…abounds in words for the hostility of the native for the alien, the majority for the minority, the respectable for the marginal, white for black, Christian for Jew, and so forth. We have prejudice, bigotry, racism, anti-Semitism, nativism, xenophobia, bias, discrimination, and so forth. But these words are themselves prejudicial: They sum up, one-sidedly, a vast range of sentiment and behavior without admitting reciprocal moral realities: the hostility of Jew for Christian, black for white, marginal for respectable, minority for majority, alien for native, abnormal for normal…

"…If we can sum up the worst attitudes of one side in the term "Nativism", then we ought to have some such term, as "Alienism" (with apologies to the psychiatric profession) to sum up those of the other."

The Natives Are Restless, by Joseph Sobran, National Review, February 22, 1985