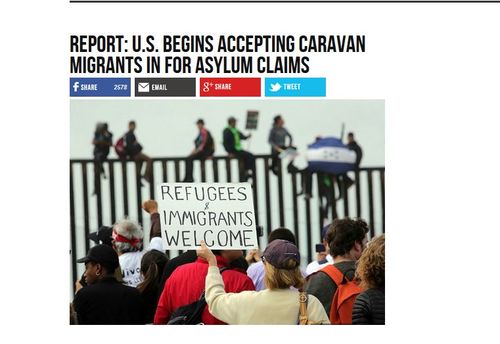 The latest Caravan Of Death To America By Demographic Displacement has arrived and the Trump Administration, against advice from this correspondent to either end all asylum claims or make claimants wait in Mexico for their immigration court hearing, has decided to allow all of the Caravan participants to make asylum claims at Ports-of-Entry (POE) along the border with Mexico.  Worse yet, the Mexican government has been escorting the invaders in buses to the border.

Mexican federal authorities at the ports of entry in Tijuana are now allowing migrants from the Central American caravan into the U.S. so they can begin asylum requests.

This week, at the Chaparral Port of Entry in Tijuana, Mexican immigration officials announced 90 Central American caravan migrants would be allowed to advance to ask for asylum, journalist Rebecca Plevin reported. Twenty-five asylum seekers were allowed on Monday and 60 more on Tuesday.

And the Mexican government is colluding with the invasion of the United States from Honduras.

While the caravan was not expected to reach the U.S. border for weeks, hundreds of members were shuttled in buses with federal police escorts along various parts of the journey from Mexico City to Tijuana.

At El Chaparral port of entry in Tijuana, Mexican immigration officials say 90 people will be allowed to make asylum claims today. People cheer; some 25 were allowed Monday, around 60 yesterday, we hear.

Yes, the Trump Administration has adopted a policy worse than catch-and-release, it is a policy of waiving in illegal aliens, most of whom will never appear for their asylum hearing!  This despite the fact that the Trump Administration has full legal authority to require all inadmissible aliens applying for admission at a land POE to wait in Mexico for their hearing date in immigration court.

(d) Service custody. The Service will assume custody of any alien subject to detention under paragraph (b) or (c) of this section. In its discretion, the Service may require any alien who appears inadmissible and who arrives at a land border port-of-entry from Canada or Mexico, to remain in that country while awaiting a removal hearing. [emphasis added, ed.] Such alien shall be considered detained for a proceeding within the meaning of section 235(b) of the Act and may be ordered removed in absentia by an immigration judge if the alien fails to appear for the hearing.

I had hoped that someone in the White House was reading VDARE.com and your correspondent, and was feeding advice that Lady DACA and others were withholding from the President. If that is true, that person needs to warn the President that he has more options.  Is there a savior out there who can get word to the President?