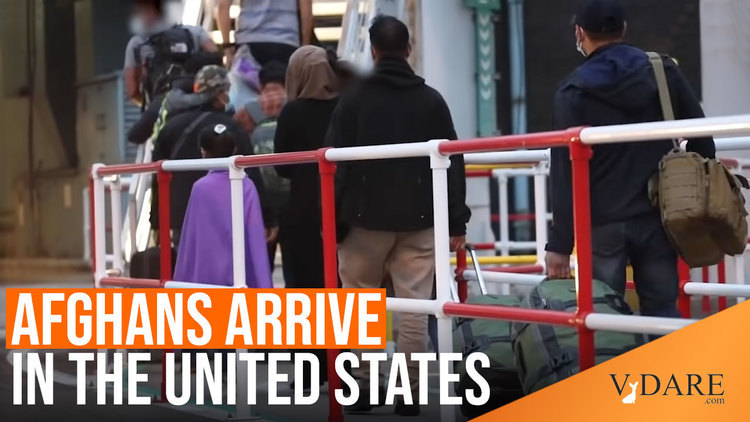 The other day I mentioned that you could check this list of existing resettlement sites and have a good idea if your community was going to be "welcoming" Afghan evacuees and Special Immigrant Visa holders that Biden flew out of Afghanistan in the last week.

Of course there are caveats.  First, longtime readers know that new arrivals can be placed within 100 miles of the listed office, and secondly, they are permitted to move anywhere they wish and many will.  That is because they will want to live with their own kind of people where existing enclaves of their particular ethnic group have settled.

But, just you try to say you want to live with your kind of people and watch the moral outrage!  Funny how it isn’t considered racist or phobic in any way when the situation is reversed.

I also said I would tell you another method to find out if you were going to be the lucky recipients of mystery (they loaded up many who had no discernable reason to be getting seats on planes to America) Afghans is to (duh!) check your local papers as one of my readers did for Kentucky. See here:

Kentucky prepares to resettle up to 775 Afghan evacuees amid challenges

To test it out for you, I simply searched for Maryland and Afghan refugees (although most are NOT legitimate refugees) and presto up popped many articles from the last week or so including some about how our Republican Governor Larry Hogan has his arms open to invite them in!

Within a few minutes I saw stories from Michigan, Utah, New York, Massachusetts and Tennessee.

Another suggestion I have had in the past is to find someone with gumption to infiltrate your local "Interfaith group" because they will be the first to be in on the action and in the know about who is coming especially if the new arrivals will be Muslims (which the majority of Afghans will be).

Okay, so when you get that information (assuming you are unhappy about it), what do you plan to do?

Are you planning to yak on social media about how it isn’t fair, that you had no say in the matter?  Are you going to mount your high horse and fume about the Constitution and State’s Rights as one “Constitutional Republican” did in recent days? In a comment shared with me, he fumed about Arizona’s Governor Ducey and asked why Ducey couldn’t just tell Biden NO, no Afghans should be dropped in Arizona.

WTH!!! Do you really think that the Open Borders Left plays fair and gives a flying c*** about prissy high-minded notions like what is Constitutional and what isn’t?  And, besides, where were you all when President Trump did try to give governors the opportunity to stop resettlement? [Trump lets states, cities refuse refugees for 1st time in US, by Julie Watson and David Sharp, Associated Press, October 2, 2019]  I reported extensively on his efforts.

Arizona’s Ducey was one of the Republican governors who told Trump, no thanks, the feds could continue sending refugees to Arizona at will.

Obviously not enough Arizona voters have told Ducey they are unhappy with him.

Only Texas Governor Abbott said he supported Trump in a bid to get his state’s right back!  (If you are wondering, DeSantis and Kemp remained silent, the contractors sued and stopped Trump, and that was the end of it.)

So, back to my question: What are you going to do besides fume on social media?

Are you simply going to read more news at sites that agree with you, shake your head and fume some more?  I’ve already told you what you have to do in my series on Fighting Back Locally.

Sorry I never finished it, but I saw little interest in it from my readers.  Frankly, I assume that was because it takes more work than reading news and yakking to like-minded people on Facebook, etc.

In my opinion, that is what is wrong with conservatives generally—we think our high-minded ideas are going to sway the debate. Fat chance!

See: What do we do now? Fight Back Locally!

If it is too hard for you to stick your necks out (and I understand that) even with the help of a few friends to speak up locally, or organize group of activists like the Left does, then at least now, more than ever, you must get to work on political campaigns for 2022!

And, let those who are in office now know what you think about the migrant invasion from all fronts.  Pounce every time they make a move that you disagree with.

Find good pro-America candidates at all levels of government!

Then you better find candidates who put America First and work on those campaigns.  Go to every campaign debate you can get to and ask the candidates in front of the audience and the media about immigration and where they stand!

You can choose to stay silent and watch them change America by changing the people, or speak up now, risk being labelled a racist (who cares!) and maybe, just maybe, pull America back from the brink!