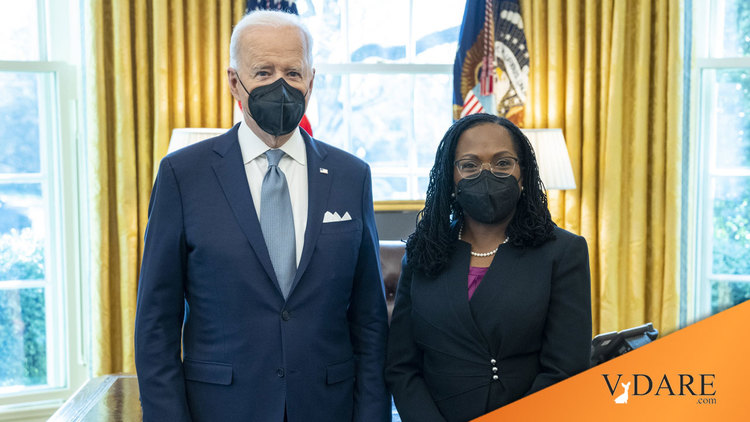 So Joe Biden has discriminated against all persons other than black women in his selection of a nominee to the Supreme Court of the United States (SCOTUS), Ketanji Brown Jackson (KBJ), an oft overruled legal mediocrity. Now some are claiming her Law School Admissions Test (LSAT) scores are fantastic, but it was racist for Tucker Carlson to demand that the American people know if Kritarch Ketanji is a mediocrity. Brown has obviously been the beneficiary of affirmative action most of her life, from university admission, to law school admission, to multiple nominations to Federal District, Appellate, and the highest court in the land. Kudos to Tucker for taking on Kritarch Ketanji. (KBJ starts at 10:00 in—click here to go there directly.)

Of course, everyone knows that Kritarch Ketanji hates Whites, just from her first name, Ketanji, a fake African name that is very common among black anti-White racists, but that is not all that is wrong with her. Of course,  her obvious hatred of Whites is probably the reason that immigration patriots should oppose this kritarch: she wants to elect a new people by mass illegal immigration.

At issue is Kritarch Ketanji’s illegal and factually incorrect overturning of the full implementation of Expedited Removal provisions of the Illegal Immigration Reform and Immigrant Responsibility Act of 1996 (IIRIRA). The Expedited Removal provisions of the Act authorized immigration officers to timely and without review by the Executive Office For Immigration Review (EOIR) and the Federal judiciary any and all illegal aliens entering into or identified within two years of entry, with a few minor exceptions.

The provisions also may be applied, in the sole and unreviewable discretion of the Attorney General, to an alien who has not been paroled or admitted into the United States and who cannot affirmatively show to an immigration officer that he or she has been continuously present in the United States for a period of 2 years immediately prior to the date of the officer’s determination.

So, there we have it, a kritarch-proof Act of Congress specifically protecting Expedited Removal from interference from Kritarch Ketanji.

However, the law is no obstacle to Kritarch Ketanji. She is on a mission and won’t let laws passed by white men or a Constitution created by slave owners that separates power between the judicial, legislative, and executive branches get in her way. Kritarch Ketanji thinks she is above the law. So Kritarch Ketanji decided that the Treason Bar and the ethnic lobby were the true voice of the law and overturned the Trump Administration’s full implementation of an Act of Congress.

Jackson granted an injunction request that stopped DHS from enforcing the new policy, arguing that the plaintiffs were “likely to succeed on the merits of their contention that the July 23rd Notice is arbitrary and capricious, and therefore unlawful, because DHS did not address significant flaws in the expedited removal system, nor does it appear that the agency considered the potential impact of the expansion of that system on settled undocumented non-citizens and their communities.”

“Plaintiffs have demonstrated that they have members who are subject to the expanded expedited removal policy, and that those members, and others, might suffer irreparable harm in the absence of a preliminary injunction,” wrote Jackson.

The U.S. Court of Appeals for the D.C. Circuit would eventually reverse Jackson’s ruling, concluding in part that “the Secretary’s decision to expand the scope of expedited removal within statutory limits is committed to agency discretion by law.”

Here we have an arrogant kritarch dictating policy and procedure in the enforcement of immigration laws where Congress has plenary power, decrying the implementation of such an Act of Congress as an abuse of power by the President. Kritarch Ketanji is as much a hypocrite as she is a power-hungry tyrant in judicial robes.

Then we get to the underlying quality of the decision. She relies on speculation by the ethnic lobby, fabrications by the Treason Bar, and irrelevancies.

First though, from a legal perspective, Kritarch Ketanji quite openly lets her low intelligence and legal scholarship show, substituted with Leftist language abuse worthy of Nineteen Eighty-Four. Kritarch Ketanji begins with the legally incorrect reference to aliens, more specifically, illegal aliens, as “non-citizens.” For someone whom the Left says is the smartest woman in the world, even smarter than Hillary Clinton, the use of “non-citizen” is legally incorrect.

All that said, what matters for present purposes is whether DHS disputes any of these accounts of the lived experiences of settled, undocumented non-citizens and the potential impact of their coming into contact with DHS’s expedited-removal practices, and if not, whether the agency took that into account when it determined that the expedited removal policy should be expanded.

The correct legal term for any person not a citizen or national of the United States is “alien,” not “non-citizen,” as there are persons who are nationals of the United States, but not citizens. Those persons, generally persons born or naturalized in American Samoa and the Swains Islands, are “non-citizens,” but are nationals of the United States, have almost all the rights and privileges of citizens, but not all rights and privileges, yet are not aliens. Therefore, this acclaimed legal scholar, Kritarch Ketanji, made a major legal blunder in one of her biggest cases, which was quickly overturned by the appellate court. Obviously Kritarch Ketanji did not do well on her LSAT.

Here is the law for the acclaimed scholar Kritarch Ketanji to review:

(3) The term “alien” means any person not a citizen or national of the United States.

The next issue is again related to her scholarship, which is the pseudo-intellectual language used in her opinion.

All that said, what matters for present purposes is whether DHS disputes any of these accounts of the lived experiences of settled, undocumented non-citizens..

“Lived experiences” is an au courant phrase used by fraudulent scholars who want to substitute anecdotes, usually fraudulent, for statistics. Kritarch Ketanji takes this from the endless stories of blacks about how “tired” they are dealing with whites and false allegations of violent and racist acts by whites against blacks. In fact, any black who uses the term “lived experiences” is perpetrating lies motivated by hate against whites.

No legal opinion should ever use the term “lived experiences,” as the term is used to substitute opinion in place of the legal record of the case, nor can such hearsay as expressed in “lived experiences” ever be used in court, as hearsay is not evidence. But Kritarch Ketanji decided that the plaintiffs' unsubstantiated claims  constitute evidence, claims that even she labels as speculative: “allegedly,” “…Plaintiffs also say…,” “purportedly,” and “…according to Plaintiffs…” Such terms are not used in legal decisions by competent judges because if something is in the record, then judges and lawyers use the term “The record reflects that…” Not so with Kritarch Ketanji, for her, speculation, supposition, and assertion are the same as facts.

For example, according to Plaintiffs, prior applications of the expedited removal policy featured erroneous identifications of persons as being subject to, as well as instances in which such erroneously identified persons were also actually deported. In addition, there have allegedly been egregious errors in recording “material statements made by noncitizens who express a fear of persecution or torture” (id. at 19; see id. at 19–21); failures to provide translators and failures “to advise noncitizens that they may request to withdraw their applications for admission, which allows noncitizens to leave the United States voluntarily and avoid penalties that include permanent inadmissibility to the country”. Plaintiffs also say that evidence concerning these and other problems was widely available before DHS issued the July 23rd Notice; for example, it is purportedly included in studies that the United States Commission on International Religious Freedom, a government entity, has conducted. [Citations removed for clarity. Author]

Then there is the open lobbying for a specific policy outcome. Kritarch Ketanji hates that illegal aliens are deported. According to her, illegal aliens contribute to America, with the implication they should not be deported. It is readily apparent that Kritarch Ketanji was just imputing her policy preferences to the law, with a concomitant strategy of delaying the full implementation of Expedited Removal in hopes that a successor to President Trump would reverse the use of the full implementation of Expedited Removal, which has happened as part of the Biden Regime Administrative Amnesty.

So, Kritarch Ketanji put a political screed into her legal opinion, substituting her policy preferences for those that Congress created with the legislation. That is what kritarchy is.

Amici contend that “DHS’s decision to expand expedited removal will inflict broad and systemic harm on the individuals, families, communities, and the broader public”, because “[p]eople who have lived in this country for one or two years . . . have begun to build lives here. They contribute to our economy and civic life in countless ways”. Amici note, for example, that “undocumented immigrants in California each year contribute an estimated $3 billion in state and local taxes” [$] 25 and that “[u]ndocumented immigrants in New Jersey paid an estimated $587.4 million in state and local taxes in 2014”. Amici also outline the impact that DHS’s expanded expedited removal designation could have on children and families, as “millions of people live in ‘mixed-status’ households, where one or both parents may be undocumented, while some or all of the children (and, sometimes, a spouse) are U.S. citizens.” Amici maintain that “[e]xpanding expedited removal means that these ‘mixed-status’ families face separation with little or no time to prepare”, and, indeed, according to the amicus brief, “[s]tudies show that children faced with the likelihood of a family member[’s] deportation can experience serious mental health problems, including depression, anxiety, self-harm, and regression”. [Citations omitted- Author]

This is a classic case of kritarchy: a sitting judge disagrees with an Act of Congress and the entirely legal policy preference of the President. In this case Congress authorized by legislation the expeditious deportation of illegal aliens and the President decided to fully comply with the law. Clearly Kritarch Ketanji disagrees with both the law and the enforcement policy; she then makes her own policy by contorting it into some imagined violation of the APA, all with the malicious intent of thwarting an Act of Congress and the lawful deportation of illegal aliens.

Worse yet, she stopped short of declaring the Act ,with its list of horribles, unconstitutional. Kritarch Ketanji knew that would not fly, which shows even more obviously her unethical intent. She deliberately intended to thwart President Trump because she is politically opposed to his actions. She knew her Deep State sabotage would not last, but decided that it would be politically advantageous to the Democrats and any delay would help end the program. The very definition of kritarchy.

Time to reject Kritarch Ketanji, vote down her nomination, and implement impeachment hearings to remove her for abuse of the law and her power. Impeachment is the answer to the kritarchy!