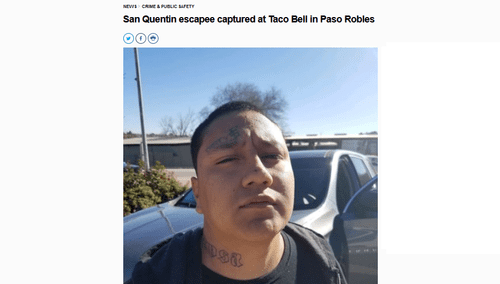 Taco Bell?! Kind of humorous in a multicultural sort of way...

A civilian observed Shalom Mendoza, 21, at the restaurant in Paso Robles, and contacted agents with the Department of Corrections and Rehabilitation. Mendoza was taken into custody without incident.

Mendoza was reported missing during an institutional count at approximately 9:35 p.m. on Dec. 26. He was assigned to work outside the secured perimeter of the prison with other inmates, and walked away.

At about 9:17 p.m., San Rafael police received a report of a carjacking in the Home Depot parking lot at 111 Shoreline Parkway, which is about a mile from the prison. The victim told police the carjacker demanded the car keys and motioned beneath his shirt to suggest he had a weapon, according to the San Rafael Police Department. Mendoza allowed the victim to retrieve her small dog before he drove away in the Toyota Rav4 sport utility vehicle. The victim was not injured. [More]

James Fulford writes: Of course, someone reported him at Taco Bell, which was brave of them—if he had turned out to be not the guy, they would have got the Becky treatment for reporting someone being "Tattooed While Hispanic."