In shocking, but unsurprising news, 70% of illegal alien family groups released during the ongoing illegal alien surge on the border have failed to report as required to the U.S. Immigration and Customs Enforcement, Enforcement and Removal Operations office having jurisdiction over the illegal aliens’ place of claimed residence.  Catch and Release is back...well it never went away!

US: Immigrant Families Fail To Report To Agents 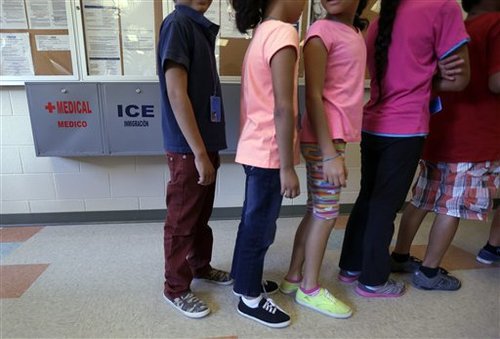 WASHINGTON (AP) — Tens of thousands of young families caught crossing the border illegally earlier this year subsequently failed to meet with federal immigration agents, as they were instructed, the Homeland Security Department has acknowledged privately.

An official with U.S. Immigration and Customs Enforcement revealed that about 70 percent of immigrant families the Obama administration had released into the U.S. never showed up weeks later for follow up appointments.

The ICE official made the disclosure in a confidential meeting at its Washington headquarters with immigration advocates participating in a federal working group on detention and enforcement policies. The Associated Press obtained an audio recording of Wednesday's meeting and separately interviewed participants.

On the recording obtained by the AP, the government did not specify the total number of families released into the U.S. since October. Since only a few hundred families have already been returned to their home countries and limited U.S. detention facilities can house only about 1,200 family members, the 70 percent figure suggests the government released roughly 41,000 members of immigrant families who subsequently failed to appear at federal immigration offices.

This is, of course, not a bug, but the Obama Regime's plan from the beginning.  More illegals for the upcoming administrative amnesty, more illegals in the welfare system, more illegals able to vote in States without an ID requirement.  Sounds like a plan for displacement of the traditional American nation.