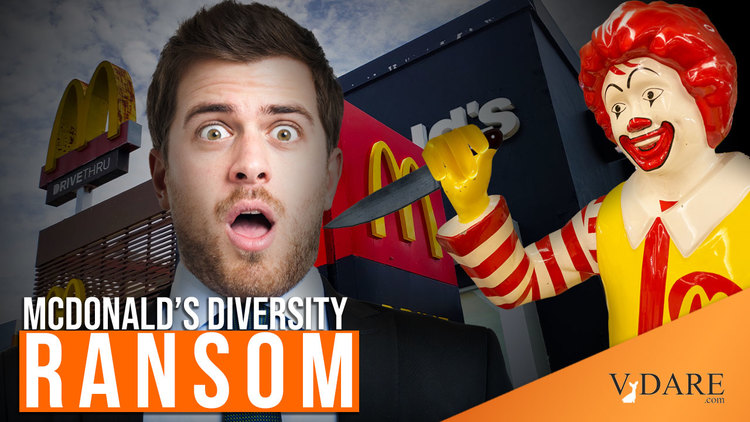 Well, we’ve known for more than a decade that McDonald’s has a policy of being 365 Black.

Now we know the inevitable result of this corporate policy.

McDonald’s Will Slash Executive Bonuses If They Don’t Promote More Women and Minorities to Senior Leadership Roles: No need for affirmative action laws when companies will just do it themselves, Big League Politics, February 21, 2021

McDonald’s executives will see their bonuses cut if they don’t promote enough women and minorities to senior leadership roles.

According to a press release, the giant fast food chain is looking to “increase representation of historically underrepresented groups in leadership roles (Senior Director and above) located in the U.S. to 35%” by 2025. It also wants to achieve “gender parity” by 2030, which will require “[increasing] representation of women in leadership roles globally (Senior Director and above) to 45%.”

29 percent of these leadership roles currently belong to “historically underrepresented groups” and 35 percent to women.

The executives will be judged on their “inclusivity” via an “Inclusion Index,” and fifteen percent of the bonuses of senior executive vice presidents will depend on their performance according to “quantitative human capital management-related metrics.” This even applies to McDonald’s CEO Chris Kempczinski.

McDonald’s donated millions of dollars to Black Lives Matter last summer, so it should come as no surprise how committed they are to “diversity, equity, and inclusion” in their own ranks as well.

Big League Politics has previously covered the diversity hires of a Mediterranean restaurant chain called CAVA, which bragged about reducing the number of their white employees by 43 percent in just one year.

“Your continued support has helped us make strides to better our organization and the communities we serve. In such a challenging year, we couldn’t have achieved any of it without you. We look forward to continuing this work and welcoming you to our table in 2021,” the chain tweeted along with four infographics detailing their efforts to feed the poor, open new locations, and spread the false gospel of “social justice.”

One of the infographics reads: “Diversity matters–in the workforce and beyond. We’ve made strides to make CAVA a diverse, inclusive workplace and remain committed to expanding the following…” The graph then shows that:

– 45 percent of all their team members in 2020 were Hispanic, no change from 2019
– 14 percent were black, up from four percent in 2019
– Eight percent Pacific Islander, up from two percent
– Three percent Asian, up from one percent
– 21 percent white, down from 37 percent

Yes, McDonald’s is now dictating to executives that they must promote non-whites or women, or face the consequences of having their bonuses cut because of a failure to value “inclusivity.”

The anti-white mindset now dominates all of Corporate America.

What did you expect from a company promoting the mantra of 365 Black? Another way of putting this concept is McDonald’s is 365 Anti-White.

Racial socialism 101—though not mandated by the state yet, Corporate America embraces the concept.

Wash that down with a Coca-Cola, because truth in 2021 America is 100 percent anti-white.