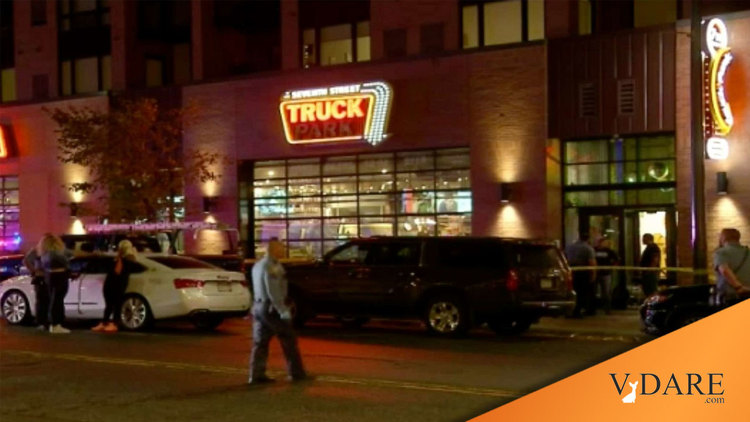 15 Shot In St. Paul: An Interesting Test Of Sailer's Law Of Mass Shootings

If there are more killed than wounded, then the shooter is likely white, Asian, or otherwise not black.

If there are more wounded than killed, then the shooter (or often shooters) is likely black.

But what if the crowd appears to be mostly white, as in last night’s St. Paul shooting of 15?

From the Minneapolis Star-Tribune:

DJ Peter Parker knows how to read the room from a bird’s-eye view on stage to anticipate any trouble from crowds, after two decades of shows spanning Baltimore, DC, Boston and beyond.

Here’s a picture of the dance floor about 10 minutes before the shooting:

could have never anticipated a show in St. Paul would turn so violent he’d have to dive offstage to avoid gunfire in the city’s largest mass shooting in recent history, killing one woman and injuring at least 14.

“I’ve never had anybody shoot inside a party ever, especially in a place we felt was a very safe place,” said Parker.

Like every Saturday night for the past four months, Parker was playing mainstream hip-hop to a college crowd of mostly young women at the Seventh Street Truck Park, a busy bar and restaurant a block south of Xcel Energy Center.

The bar’s schtick is that it’s for young people who like food trucks, but, being cold in St. Paul much of the year, the food trucks are inside!

Around 12:15 a.m., Parker said a dozen or so gunshots rang out. The crowd hit the ground and Parker cut the music only to hear everyone screaming. He said he didn’t see a scuffle or altercation leading up to the shooting.

Within seconds, the crowd ran outside of the bar and he saw several people on the floor, including a woman in her 20s who was killed. “My heart is broken for the girl who died,” said Parker.

Police confirmed the victim’s name as Marquisha Wiley. The Pioneer Press reports the 27-year-old was a veterinary technician from St. Paul. Her death is the 32nd homicide in St. Paul this year. In 2020, the city matched its one-year record with 34 homicides, the same number as 1992.

Did anything in the news happen in the Twin Cities in 2020 that might have encouraged this tsunami of murder? Maybe Trump said something? Or Systemic Racism?

St. Paul Police say among the wounded were three suspects who were arrested Sunday afternoon. The men, ages 33, 32 and 29, were taken to area hospitals for treatment before being apprehended.

Any bets on the race(s) of the various shooters?

The Star Tribune does not typically name suspects until they are formally charged.

It gets in the way of us editorializing how “gun violence descended.”

On a Sunday morning walk with her labradoodle Shiloh, Amber Remackel [white lady] was so overcome with emotion that she sat across the street from the Truck Park at a table outside Cossetta’s Italian Market & Pizzeria and wept. The mother and school counselor said she’s lived in the neighborhood for the past six years and has never seen such violence.

“It’s way too close to home,” she said, wiping away tears.

Remackel said she just picked up her 21-year-old daughter and a group of Iowa State University friends on Friday night from the Truck Park. “It’s a fun place to be in St. Paul,” she said of the bar, which is always packed on weekends.

Other witnesses interviewed in other news stories include Jake Knutson who lives above the bar.

“I walk this neighborhood at all times of the night with my dog and never felt unsafe,” she said.

Police spokesman Steve Linders said he was not aware of any recent calls for police service to the Truck Park. He said the department’s video team is recovering and reviewing security footage from the bar. He wouldn’t say how many guns were recovered from the scene.

Truck Park is part of a popular restaurant and bar district along West Seventh Street, home to longtime restaurants and bars such as Cossetta, Mancini’s Char House and Patrick McGovern’s Pub. In recent years, the neighborhood has been in the midst of a building boom, with several upscale apartment and condo buildings sprouting up, along with new breweries, restaurants and bars, like the Truck Park.

… He said he and other business owners in the area link the uptick on the Freedom House, a homeless shelter a few blocks away from Cossetta.

“Seventh Street has become a lot more dangerous lately,” Cossetta said. “There’s been a lot of issues more than ever and that’s pretty much the way it’s been for over a year. I don’t know the circumstances across the street but it’s been a common theme lately.”

Cossetta said there have been confrontations outside his restaurant and he said guys have pulled knives on people in broad daylight. “It’s scary,” he said. “There’s stuff going on in the day. In the nighttime it only accelerates.”

He said city officials have not listened to local business owners’ concerns about the recent wave in criminal activity.

Molly Jalma, executive director of the Listening House, which operates the Freedom House in the former fire station on West Seventh Street, said she spoke with the shelter’s off-duty police officer who worked Saturday night and said Freedom House guests had no involvement with the shooting.

“This wasn’t an issue of people who are unsheltered,” she said. “This is an issue of gun violence.”

Linders said his partner in the department for 15 years “can’t remember anything like this in her tenure.”

“We have a very busy bar, a lot of people just enjoying themselves and then we had a few individuals who decided to pull out guns and pull the trigger indiscriminately, with no regard for human life,” said Linders. “It’s nothing short of a tragedy.”

Sheriff Bob Fletcher predicted there would be a shooting at Truck Park in St Paul a night before it happens… we need to trust our police and give them all the resources to keep our cities safe. Any talk of defunding them is ridiculous! pic.twitter.com/mo9g8EgPlt

Our investigators have arrested three men who were involved in this morning’s homicide and shootings at a West Seventh Street bar: I didn’t find a picture of the third arrestee that I felt total confidence in.